Prominent legal scholar and activist Xu Zhiyong, who has been detained since February 2020, has for the first time been allowed to meet with his lawyer through two video calls. During these conversations, Xu told his lawyer that he was subjected to torture when he was detained under “residential surveillance under designated location” and described harsh conditions in the current detention center. Originally detained for “inciting subversion of state power”, the People’s Procuratorate of Linyi City informed Xu’s lawyer on 20 January that he is now charged with “subversion of state power”. Given Xu’s treatment over the last year, there are grave concerns that he could be at risk of further torture and other ill-treatment. 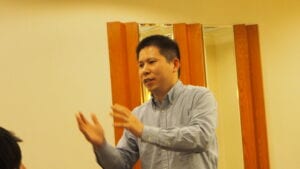 I am writing to express my concern about the prominent legal scholar and activist Xu Zhiyong (許志永), who has been detained since February 2020 and was charged with subversion of state power (颠覆国家政权) on 20 January 2021.

It is encouraging to learn that, after more than a year of incommunicado detention, Xu Zhiyong was finally able to meet his lawyer via video call on 21 January and 5 February. However, Xu reportedly revealed in these calls that his current conditions in the Linshu County Detention Center are incredibly harsh. I find it extremely worrying that Xu receives only one steamed bun for each meal every day and fear that his health will deteriorate without sufficient nutrition. I also found it distressing to learn of the treatment that Xu had to endure while detained in “residential surveillance in a designated location”. According to Xu, he was bound to an iron chair and his limbs were restrained for more than 10 hours a day for more than a week. He found himself very exhausted and struggled to breathe while restrained. This treatment violates the prohibition against torture and other ill treatment under international human rights law.

Xu Zhiyong has been detained for peacefully exercising his right to freedom of association. The fact that he was subjected to torture and ill-treatment while held in “residential surveillance in a designated location” and is now currently enduring such harsh conditions in the current detention center has significantly increased my concern for his current and future wellbeing. I call on you to release Xu Zhiyong immediately and unconditionally unless there is sufficient credible and admissible evidence that he has committed an internationally recognized offense and is granted a fair trial in line with international standards; pending his release, ensure that Xu Zhiyong has regular, unrestricted access to family and lawyers of his choice and is not subjected to torture and other ill-treatment; and ensure Xu Zhiyong is provided adequate food and allow him prompt, regular and unrestricted access to medical care.