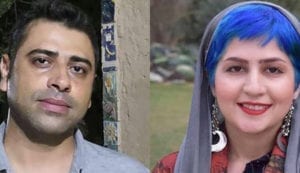 Labor rights activist Sepideh Gholian and her family are suffering from constant abuse and harassment by ministry of intelligence officials and prison authorities in Shahr-e Rey prison, where she is held in dire conditions.

On 20 October, she went on hunger strike after she learned that her sister Samaneh Gholian had been arbitrarily arrested and detained by ministry of intelligence officials in the city of Ahvaz simply for being Sepideh Gholian’s sister. Samaneh Gholian was released on 22 October following hours of intense interrogations.

In an audio recording leaked from inside prison on 24 October, Sepideh Gholian explains, in a shaky voice choked with tears, that prison officials have made her life in prison “suffocating” and “unbearable”, constantly subjecting her to bullying, insults and threats, preventing her from speaking to her cellmates, and intimidating and abusing her family during prison visits. She is heard crying and saying, “I cannot bear this any longer. I want people to know what suffering they [the authorities] are inflicting on us in prison… I am exhausted. I do not know what else to do. I want a delegation from the judiciary to come to the prison and see what suffering is being inflicted on me and other prisoners.”

Sepideh Gholian and fellow labor rights activist Esmail Bakhshi have been in prison since January 2019 in connection with their participation in peaceful protests and for publicly complaining that they were tortured after their first arrest in November 2018. I urge you to ensure that Sepideh Gholian and Esmail Bakhshi are released immediately and unconditionally and their convictions and sentences are quashed as they are prisoners of conscience targeted solely for the peaceful exercise of their rights to freedom of expression, association and peaceful assembly; pending their release, ensure that Sepideh Gholian and her family are protected from ill-treatment and can have regular visits together without harassment and undue interference; ensure that their allegations of ill-treatment by ministry of intelligence and prison officials are effectively investigated and that anyone suspected of responsibility are brought to justice in fair trials.