Austrian-Iranian businessman Kamran Ghaderi is serving a 10-year prison sentence after a grossly unfair trial that relied on “confessions” obtained under torture to convict him of “co-operating with hostile states against the Islamic Republic”. He was denied access to a lawyer and his family, and he needs ongoing medical care for a tumor in his left leg. 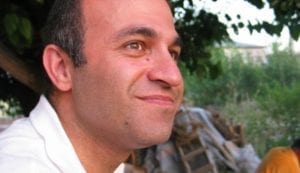 Austrian-Iranian businessman Kamran Ghaderi, aged 55, is serving a 10-year prison sentence after a grossly unfair trial in August 2016 that relied on forced “confessions” obtained after he was threatened and held in prolonged solitary confinement. He was convicted of “co-operating with hostile states against the Islamic Republic”, an overly broad and vague charge that contravenes the principle of legality. He was denied access to a lawyer for the first seven months of his detention and only saw a lawyer two days before his trial. He was also denied access to consular assistance. Since his arrest in January 2016, Kamran Ghaderi’s health has deteriorated. He has a tumor in his left leg for which he needs ongoing medical care.

Recalling the conditions in solitary confinement in section 209 of Evin prison, which is under the control of the ministry of intelligence, Kamran Ghaderi later told his wife that his cell felt like a “grave”. The cell measured around 1.5m in length, with neither windows nor a bed, forcing him to sleep on a thin rug on the floor. After nearly a year in solitary confinement, he was moved to a cell with another prisoner, still in section 209, before being transferred to the general ward in April 2017.

Kamran Ghaderi was arrested on 2 January 2016 at Imam Khomeini airport in Tehran by ministry of intelligence agents, after arriving on a trip to visit family. He was denied any family contact, except for one brief phone call to his wife in Austria to inform her he was alive, until April 2016. During this time, Kamran Ghaderi says interrogators told him his mother and brother had been arrested and threatened to keep them in prison if he did not sign two “confessions” that had been prepared for him by the authorities saying he worked for the governments of Austria and the USA. It was only in April 2016, when his mother was finally allowed to visit him that he learned neither she nor his brother had been arrested.

I urge you to quash the conviction and sentence against Kamran Ghaderi and release him, unless he is charged with an internationally recognizable offense in accordance with international fair trial standards. His right to a fair trial has been grossly violated, including his right not to incriminate himself and his right to access a lawyer from the time of arrest. I also urge you to provide him with the specialized medical care he needs at an appropriate medical center outside prison.