On April 18, 2021 the Algerian authorities arrested journalist Rabah Kareche shortly after he published an article in Liberté newspaper, covering a protest staged by the Tuareg population of the Tamanrasset area, in southern Algeria, contesting the recent transfer of parts of their province into a newly established province. He is detained in a prison in Tamanrasset awaiting trial and could face up to 23 years in prison if convicted. He must be immediately and unconditionally released. 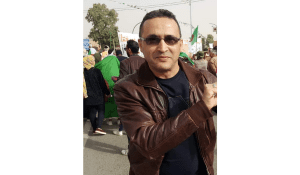 I am writing to raise concern about the recent arrest and detention of Algerian journalist Rabah Kareche, a correspondent of the Liberté newspaper in Tamanrasset in southern Algeria. The Algerian security forces summoned him on April 18, 2021 and questioned him at length about an article that he published on the same day. The article in question covers a protest organized by the Touareg population of Tamanrasset to contest a recent administrative territorial demarcation and demand the authorities to abolish a new decree that sets new territorial boundaries that allows the transfer of a portion of Tamanrasset, rich in natural resources, into newly created wilayas (provinces).

A prosecutor at the first instance court of Tamanrasset charged Rabah Kareche on April 19 with the offences of “spreading fake news or information which threatens security or public order” and “harming the national security or national unity” under Penal Code articles 196 bis and 79 respectively as well as “creating or supervising an electronic site to publish information likely to cause discrimination and hatred in society” under article 34 of the newly adopted Law on Preventing and Combating Discrimination and Hate Speech. An investigative judge at the same tribunal ordered Rabah Kareche’s pre-trial detention that same day in the Tamanrasset prison. His lawyers submitted a request for provisional release, but the court rejected it on April 27. Rabah Kareche will be in prison until his trial, which has not been scheduled yet.

This is not the first time that Rabah Kareche has been targeted for his journalistic work. During the two months leading to this arrest, he was subjected to harassment and intimidation by the security forces who summoned him at least three times in the aftermath of publishing an article about sub-Saharan migrants in Algeria. Rabah Kareche alleged that the police pressured him to reveal his sources which he refused.

In light of the above, I urge you to immediately drop all the baseless charges against Rabah Kareche, and immediately and unconditionally release him from detention as he is detained solely for peacefully exercising his human rights and carrying out his job as a journalist. I also call on you to ensure that authorities stop harassing and intimidating journalists in Algeria and that authorities respect, protect, promote and fulfil people’s right to freedom of expression and media freedom in line with international human rights standards, including through amending provisions of laws that are used to restrict freedom of expression.