Hüseyin Galip Küçüközyiğit, a former legal advisor at the Prime Ministry who was dismissed following the 2016 coup attempt, has been missing since 29 December 2020. His family suspect him to have been abducted and subjected to enforced disappearance and all their efforts to locate him since have been in vain. The authorities have denied that he is in official custody. Turkish authorities must promptly investigate to determine the whereabouts of Hüseyin Galip Küçüközyiğit and urgently inform his family. 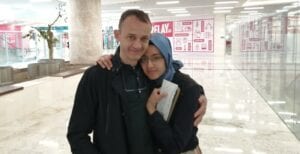 I am writing regarding the suspected enforced disappearance of Hüseyin Galip Küçüközyiğit who was last heard of on 29 December 2020 at 3.40pm when he called his daughter Nursena Küçüközyiğit to arrange a meeting with her the next day in Kocaeli. Having tried to contact her father on numerous occasions in the following two days, the daughter reported him missing on 31 December at the local police station.

In recent years, several men have disappeared in similar circumstances and appeared in official custody months later. Some of them described later in court the circumstances of their enforced disappearance and the torture and other ill-treatment they had been subjected to.

I urge you to ensure a prompt, impartial and independent investigation is carried out to determine the whereabouts of Hüseyin Galip Küçüközyiğit and the circumstances of his suspected enforced disappearance; any information relating to his location and wellbeing must urgently be shared with his family. I also urge you to ensure that all those suspected of criminal responsibility are brought to justice in fair trials.