Prominent human rights defender, Thin Thin Aung is facing three years in prison over materials published and broadcast by the media outlet she co-founded. She is among hundreds facing similar charges and thousands arbitrarily detained since the February 1, 2021, coup simply for the peaceful exercise of their rights to freedom of expression, association and assembly. The Myanmar military must immediately and unconditionally release Thin Thin Aung and all others in arbitrary detention and drop all charges against them. 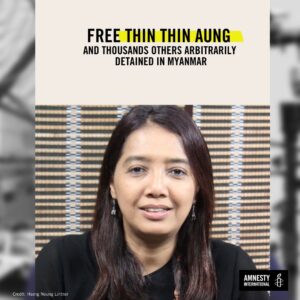 I am writing to express my grave concern about the prosecution of Thin Thin Aung, who has been targeted simply for her connection to news outlet Mizzima, which has reported on the Myanmar coup and subsequent human rights violations by security forces. She is among the more than 5,200 individuals who are in detention simply for the peaceful exercise of their rights to freedom of expression, association, and assembly. I urge you to ensure the immediate and unconditional release of her and thousands of others who remain arbitrarily detained across Myanmar.

Thin Thin Aung was arrested in Yangon on April 8, 2021 and is facing up to three years in prison under Section 505 (a) of the Penal Code. She was accused of “inciting public unrest” and “causing fear” with materials Mizzima has published since its license was revoked on March 8, 2021, even though she had resigned from her role as Director of Mizzima on February 4.

I am alarmed that media workers, as well as peaceful activists, human rights defenders, medical workers, political opponents, and critics of the military, continue to be targeted for arrest, detention, prosecution and imprisonment on politically-motivated grounds. It is imperative that Myanmar respects and protects the right to freedom of expression, association, and peaceful assembly along with other human rights, in line with its obligations under international law.

While I appreciate that over 2,300 prisoners were released on June 30, 2021, Thin Thin Aung and thousands of others remain in arbitrary detention. It is distressing to learn that reports of enforced disappearances, torture and other ill-treatment and deaths in custody continue to emerge.

I am further worried about Thin Thin Aung’s health in detention. Already suffering from a chronic condition of asthma, she is at heightened risk in a crowded prison, which presents prime conditions for a Covid-19 outbreak.

Therefore, I call on you to: