Azerbaijani human rights activist and former prisoner of conscience Ilkin Rustamzade and his family have been facing threats and harassment since Ilkin Rustamzade launched a petition asking the government to provide social security to persons affected by COVID-19. 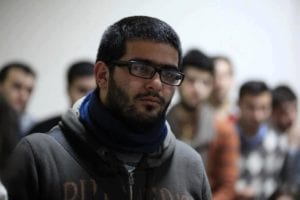 I am extremely concerned about the latest campaign of harassment against human rights defender and former prisoner of conscience Ilkin Rustamzade and his family.

Ilkin Rustamzade began receiving anonymous threats on 29 March after he launched a petition calling on the government to provide social assistance to persons affected by the COVID-19 pandemic. A person with an anonymous account on social media threatened to publish intimate photos of Ilkin Rustamzade’s wife unless he took down the petition. After his refusal to do so, on 6 April the intimate photos of his wife, with her name and telephone number, were published online and on an escort website. It appears that a coordinated and funded smear campaign has also been launched against Ilkin Rustamzade on paid Facebook pages and other online sites.

On 8 April the police searched the house of Ilkin Rustamzade’s parents and took his father to the local police station in the Khatai district of Baku. His father was released shortly afterwards without any charges.

Ilkin Rustamzade has experienced ongoing harassment from the authorities for his peaceful activism. In 2013 he became a prisoner of conscience when he was arrested on fabricated charges and spent six years in prison.

I urge you to take all necessary steps to ensure that all harassment, threats and intimidation against Ilkin Rustamzade and his family stop immediately; and ensure a prompt, independent and impartial investigation into the threats, harassment, violations of the right to privacy and the smear campaign against Ilkin Rustamzade and his family and ensure that those responsible are brought to justice.