Azerbaijani Turkic activist, Abbas Lesani, arbitrarily imprisoned in Ardabil prison, Ardabil province, was sentenced to 15 years in prison by an appeal court after a grossly unfair trial. The appeal proceedings were presided over by a judge who had filed the charges against him in his previous capacity as prosecutor. In July 2020, the Supreme Court rejected his request for a judicial review. 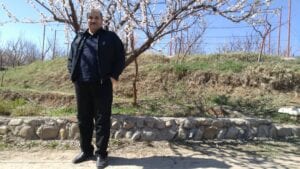 I am writing to express concern about the arbitrary detention of Azerbaijani Turkic activist Abbas Lesani who was imprisoned following grossly unfair judicial proceedings in both the court of first instance and appeal court. In July 2020, the Supreme Court rejected his request for a judicial review of his case.

Abbas Lesani was arrested on 15 January 2019 by Ministry of Intelligence agents in Tabriz, East Azerbaijan province. The authorities held him incommunicado and subjected him to enforced disappearance for six weeks by concealing his fate and whereabouts from his family. He was detained at a Ministry of Intelligence detention facility in Ardabil and held in prolonged solitary confinement in violation of the absolute prohibition on torture. His interrogators tried to force him to make false “confessions” incriminating himself, which he refused to do. On 4 July 2019, Branch 2 of the Revolutionary Court in Tabriz convicted him of “forming a group composed of more than two people with the purpose of disrupting national security” and sentenced him to eight years in prison, followed by two years of “internal exile” in Yazd province, hundreds of kilometers from his family. On 26 September 2019, an appeal court increased his sentence to 10 years. It also convicted him of “inciting people to go to war with each other with the purpose of disrupting national security”, a charge he was acquitted of by the lower court and sentenced him to an additional five years in prison. The judicial proceedings to which he was subjected were grossly unfair. He was denied access to a lawyer during the investigation phase and to adequate time and facilities to prepare a defense. The judge reviewing his case in the appeal court was the prosecutor who issued the indictment and filed the charges against him. His lawyer’s objection to this on grounds of judicial bias was never addressed. Under Iran’s sentencing laws, he will serve 10 years of his sentence. Amnesty International believes that the case against Abbas Lesani is politically motivated, given his long history of activism for the rights of the Azerbaijani Turkic ethnic minority.

I call on you to release Abbas Lesani, as he has been targeted because of his activism. His continued imprisonment is arbitrary on the grounds that both his initial trial and appeal proceedings were grossly unfair and failed to meet international fair trial standards. His sentence and conviction stemming from the peaceful exercise of his rights should be quashed. I also urge you to ensure an end to state harassment and intimidation of his family.