Chinese human rights defender Yang Maodong (better known by his pen name, Guo Feixiong) has been unreachable since the morning of 29 January. He began an indefinite hunger strike at Shanghai’s Pudong International Airport on the night of 28 January after the Chinese authorities prevented him from leaving the country to visit his critically ill wife in the US, saying that he was suspected of “endangering national security”. With no communication from him, there are grave concerns about his situation and well-being. 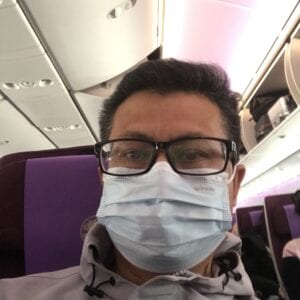 I am writing to express my grave concern about human rights defender Yang Maodong, better known by his pen name Guo Feixiong (杨茂东，笔名郭飞雄), who has been unreachable since the morning of 29 January. He began an indefinite hunger strike at Shanghai’s Pudong International Airport on 28 January after being prevented from leaving the country to visit his critically ill wife in the USA.

I find it very troubling to learn that, as he was told by the authorities, Yang was prevented from leaving the country under suspicion of “endangering national security” even though he is currently not known to be under any criminal investigation. The Chinese authorities had told Yang that they would only allow him to travel if he would first make an “agreement” with officials from the Ministry of Public Security in Hubei. It is unclear what the nature of the “agreement” is, and I worry it could be a tactic to stop him from continuing his human rights activism. A favorable environment should be provided for the work of human rights defenders.

According to international human rights law and standards, everyone is free to leave any country, including one’s own, unless a restriction is necessary and proportionate for a legitimate aim as provided by law. Reasons for restrictive measures must be provided in the individual case and not merely based on a generic allegation. As it is currently impossible to make contact with Yang Maodong, I am gravely concerned about his health and safety.

I therefore call on you to allow Yang Maodong to leave China and lift any arbitrary restrictions being imposed on him, and, in the meantime, ensure he has adequate access to qualified health professionals providing health care in compliance with medical ethics in light of his hunger strike.