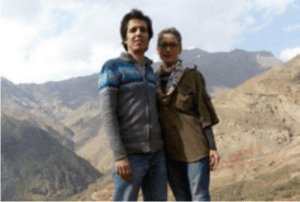 Sanaz Alahyari and her husband, Amirhossein Mohammadifar, are staff members of Gam, an online magazine that reports on social justice issues, including labor rights. On 9 January 2019, they were arrested in Tehran and transferred to section 209 of Evin prison, which is run by the ministry of intelligence. After spending a period in solitary confinement, Sanaz Alahyari was transferred to the women’s ward of Evin prison and Amirhossein Mohammadifar to section 4 of Evin prison. During this period, they were subjected to interrogations without a lawyer present. Their families were told that they had to select a lawyer from a list of lawyers approved by the head of the judiciary, but they refused to accept this restriction.

According to information obtained by Amnesty International, Sanaz Alahyari was kept in a dark cell in section 209 of Evin prison, deprived of access to natural light, and forced to sleep on the floor. The authorities also refused to provide her with new glasses after her old ones broke in circumstances unknown to Amnesty International. Sanaz Alahyari’s first family visit was 20 days after her arrest and took place behind a glass screen. When her family next visited her in March 2019, they saw that her eyes had severely swollen. Sanaz Alahyari has since developed other health problems, including recurrent stomach pains and severe shaking movements in her hands and legs. She has also lost about 10kg. Her family has repeatedly urged the prosecution and prison authorities to transfer her to a medical centre outside of prison for diagnostic tests and have written two letters in this regard to the prosecutor general of Tehran, Ali Alghasi Mehr, and the prosecutor general of the country, Mohammad Jafar Montazeri. Their pleas have gone unanswered.

On 14 January 2019, another staff member of Gam magazines Amir Amirgholi was similarly arrested by Ministry of Intelligence officials in the city of Babolsar and transferred to section 209 of Evin prison. He was held in solitary confinement for 40 days, and subsequently transferred to Sheyban prison in Ahvaz, Khuzestan province. The transfer apparently took place at the request of Ministry of Intelligence officials and prosecution officials in Shush, Khuzestan province, who have arrested, since November 2018, several labor rights activists in connection with the peaceful protests of workers at Haft Tappeh sugar cane company. He was returned to Evin prison in 28 April.

On 29 April, Sanaz Alahyari, Amirhossein Mohammadifar and Amir Amirgholi were separately brought before the office of prosecution in Evin prison and informed of their charges, which include “gathering and colluding to commit crimes against national security”, “spreading propaganda against the system”, “spreading lies” and “membership of a group formed with the purpose of disrupting national security”. The charges brought against these journalists stem directly from the peaceful exercise of their rights to freedoms of expression, association and assembly through reporting on the protests of workers at Haft Tappeh sugar cane company in Khuzestan province over unpaid wages and poor conditions. They are currently awaiting trial before branch 28 of the Revolutionary Court in Tehran.

At least three other labor rights activists, Esmail Bakhshi, Sepideh Gholian and Ali Nejati, and one journalist, Asal Mohammadi, are facing criminal proceedings in connection with their involvement with the peaceful protests at Haft Tappeh Sugar Cane Company. Esmail Bakhshi and Sepideh Gholian have been in detention since 20 January 2019. They were arrested after they spoke out about the torture they said they suffered in custody during their first period of detention in November and December 2018 (see “Labour rights activists at risk of further torture”, 29 January 2019, MDE 13/9745/2019). Ali Nejati, the former chair and a current member of Haft Tappeh labor syndicate, was arrested on 29 November 2018 and released on bail on 28 January 2019, pending his trial. Asal Mohammadi, another staff member of Gam magazine, was arrested on 8 December 2018 and released on bail on 5 January 2019, pending her trial. Amnesty International understands that the prosecution authorities have joined the cases of these individuals with those of Sanaz Alahyari, Amirhossein Mohammadifar and Amir Amirgholi and that they will likely face trial together.