Thousands of Lives In Danger As Trump Slashes Number of Refugees Admitted to U.S. 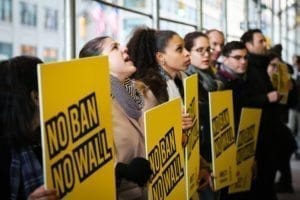 WASHINGTON – Responding to reports that President Trump will slashed the number of refugee admissions to the United States to an all-time historical low number of 45,000 next year, Margaret Huang, executive director of Amnesty International USA, released the following statement:

“If these reports are true, this is a devastating betrayal of an American tradition of helping people escape war and horrific violence. President Trump’s heartless decision puts thousands of people’s lives at risk of certain death. Refugees are ordinary people who have lost everything. They deserve our compassion and concern as they rebuild their lives. Instead, President Trump is prioritizing a dangerous agenda of bigotry and hate. We cannot allow fear-mongering to block vulnerable people from gaining safety.”

The U.S. refugee program has long enjoyed bipartisan support, with former President George H.W. Bush admitting more than 100,000 refugees during every year of his presidency. In his last year, President Obama set the refugee ceiling at 110,000.  Trump’s drastic reduction in refugee slots represents the lowest refugee admissions ceiling since the 1980s, when the U.S. refugee admissions program was formally established. Amnesty International called for the U.S. to accept at least 75,000 refugees in 2018.