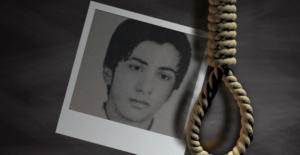 The Iranian authorities must halt the imminent execution of Alireza Tajiki, who was arrested as a child, said Amnesty International today, after learning that he was transferred to solitary confinement this morning and is due to be executed in less than 24 hours in Shiraz’s Adel Abad prison.

Tajiki was just 15 at the time of his arrest and 16 when he was convicted and sentenced to death. He was transferred to solitary confinement in Adel Abad prison in Shiraz, Fars Province, on August 9. His family were told to come to prison in order to make their final visit. The authorities did not inform his legal representatives, contrary to Iran’s own laws, which require lawyers to be informed of their clients’ scheduled execution at least 48 hours in advance.

“This is an utterly shameless act by the Iranian authorities. They are keenly aware that using the death penalty against someone who was under 18 years of age at the time of crime is in flagrant breach of Iran’s obligations under international human rights law, including the UN Convention on the Rights of the Child,” said Magdalena Mughrabi, Deputy Director for the Middle East and North Africa at Amnesty International.

“Despite this, time and again Iran’s judicial authorities and lawmakers have failed to take any steps to once and for all end the use of the death penalty against juvenile offenders. The Iranian authorities must immediately halt any plans to execute Alireza Tajiki.”

Tajiki, now 21 years old, was sentenced to death in April 2013 after a criminal court in Fars Province, southern Iran, convicted him of murder and lavat-e be-onf (male on male rape). The trial was grossly unfair and relied primarily on “confessions” which Tajiki has said where extracted through torture, including severe beatings, floggings, and suspension by arms and feet.

Both the lower court in Fars Province and the Supreme Court relied on state forensic opinions stating that Tajiki was “mature” at the age of 15 and thus eligible to receive the death penalty. In a subsequent response to the UN Office of the High Commissioner for Human Rights in October 2016, the representatives of Iran reiterated their outrageous position that Tajiki “had sound intellect and understanding about unlawfulness of the committed acts and their punishment” at the time of the crime when he was 15 years old and therefore could be punished with the death penalty.

Tajiki was first arrested in May 2012 and placed in solitary confinement for 15 days, without access to his family. He was denied access to a lawyer throughout the entire investigation process. He has said that during this period he was subjected to torture and other ill-treatment to “confess” to the crime. He later retracted the “confessions” both before the prosecution authorities and during his trial, and has since maintained his innocence consistently. However, despite this, his “confession” was admitted as evidence during proceedings against him.

“The Iranian authorities are demonstrating once again their callous disregard for children’s rights as well as fair trial standards. This is now the third time since May 2016 that the authorities have scheduled Alireza Tajiki’s execution. Rather than repeatedly tormenting Alireza Tajiki with execution dates, the authorities must once and for all cancel all plans to execute him, and grant him a fair retrial in accordance with the principles of juvenile justice and without recourse to death penalty.”

Iran is one of the last few countries in the world that still executes juvenile offenders. In January 2016, Amnesty International published a report which found that despite piecemeal reforms introduced by the Iranian authorities in 2013 to deflect criticism of their appalling record on executions of juvenile offenders, they have continued to condemn dozens of young people to death for crimes committed when they were below 18, in violation of their international human rights obligations.

As of August 2017, Amnesty International had identified the names of at least 89 individuals on death row who were under the age of 18 when the crime was committed.