Merch Store 2022 VIRTUAL ANNUAL GENERAL MEETING Urgent Actions Member Center
© LAMPEDUSA, ITALY - MAY 24: Refugees and migrants are seen swimming and yelling for assistance from crew members from the Migrant Offshore Aid Station (MOAS) 'Phoenix' vessel after a wooden boat bound for Italy carrying more than 500 people capsized on May 24, 2017 off Lampedusa, Italy. Numbers of refugees and migrants attempting the dangerous central Mediterranean crossing from Libya to Italy has risen since the same time last year with more than 43,000 people recorded so far in 2017. In an attempt to slow the flow of migrants Italy recently signed a deal with Libya, Chad and Niger outlining a plan to increase border controls and add new reception centers in the African nations, which are key transit points for migrants heading to Italy. MOAS is a Malta based NGO dedicated to providing professional search-and-rescue assistance to refugees and migrants in distress at sea. Since the start of the year MOAS have rescued and assisted 3572 people and are currently patrolling and running rescue operations in international waters off the coast of Libya. (Photo by Chris McGrath/Getty Images) 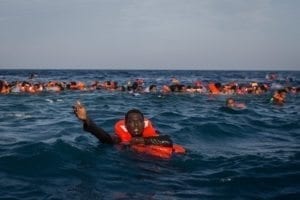 uthorities to circumvent their duty to rescue refugees and migrants at sea and to offer protection to those who need it, said Amnesty International, ahead of a vote in the Italian parliament tomorrow.

Under the plan up to six vessels would be deployed to support the Libyan coastguard in the interception and return of refugees and migrants to Libya, where they would face horrific abuses and human rights violations. Italian military personnel are likely to be authorized to use force against smugglers and traffickers, and the plan could also result in refugees and migrants being caught in the crossfire.

“Rather than sending ships to help save lives and offer protection to desperate refugees and migrants, Italy is planning to deploywarships to push them back to Libya,” said Amnesty International’s Europe Director John Dalhuisen.

“This shameful strategy is not designed to end the spiraling death toll in the central Mediterranean but rather to keep refugees and migrants from Italian shores. Claims that the rights of those returned will be respected will ring hollow in the ears of those that have fled horrific abuse in Libyan detention centers.”

For more information see Amnesty International’s recent report A perfect storm: The failure of European policies in the Central Mediterranean which finds that European governments are failing to prevent drownings and turning a blind eye to abuse, including torture and rape.

Libya remains extremely unsafe for refugees and migrants, who are routinely subjected to killings, kidnappings for ransom, enslavement and forced labor, rape and other abuses. There is no asylum system in the country for those in need of protection and irregular entry and stay are criminalized resulting in the automatic detention of thousands of people.