1) Turkey – Human Rights Defenders and Political Dissidents are Under Attack

7) Mauritania – Trump Administration Should Halt the Deportation of Asylum Seekers

1) Turkey – Human Rights Defenders and Political Dissidents are Under Attack. On August 22 Daniel Balson, Eurasia Advocacy Director, was interviewed on Plugged in With Greta Van Susteren about how the Turkish government has attacked free press and political dissidents through threats, harassment, prosecutions and mass imprisonment. Human rights defenders (“HRDs”) in Turkey are living in constant fear. At any moment they might be arrested and find themselves in prison for months, even years, on baseless charges. On August 15 Turkish authorities finally released Taner Kilic, Chair of Amnesty International Turkey, who spent more than 14 months behind bars. Taner’s plight is emblematic of the wave of repression that has gripped Turkey since 2016, with more than 1,300 NGOs and 180 media outlets being shut down, and with over 50,000 people imprisoned awaiting trial. Ten other activists (known as the Istanbul 10), including İdil Eser, the Director of Amnesty International Turkey, were detained in summer 2017 while attending a human rights workshop. Eight of them were held for almost four months before being released on bail in October 2017. Taner Kilic and İdil Eser are still facing criminal trial for baseless charges of belonging to a terrorist group. Amnesty International would like to thank all the Congressional offices who have fought for their release, and we urge you to be resilient in pressing Turkish authorities to dismiss all charges against them. 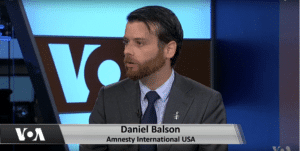 2) Myanmar – Senior Military Officials Should be Held Accountable for Crimes Against Humanity. On August 17 the Department of Treasury imposed targeted sanctions against four Myanmar officials and two military units. In response, Francisco Bencosme, advocacy manager for Asia-Pacific at Amnesty International USA was cited by several news outlets: “Senior officials in Myanmar implicated in crimes against humanity must be held to account for their roles in the brutal ethnic cleansing campaign against the Rohingya women, men and children. Responsibility extends to the highest levels of the chain of command – so too should justice and accountability.” While Amnesty International celebrates this news, we call for further action to refer the situation in Myanmar to the UN Security Council.

4) Yemen – U.S. Should Stop Supplying Weapons to Saudi Arabia-Led Coalition. In August an Amnesty International op-ed was published in the Washington Post calling for the halt of arms sale to the Saudi Arabia-led coalition in Yemen. Since the coalition’s air strikes began in March 2015, Amnesty International has investigated dozens of air strike sites in eight governorates. Many of the remnants of munitions were manufactured in the U.S. On August 28 the U.N. Human Rights Council recommended nations to refrain from supplying weapons that could be used in the Yemen conflict. Congress should suspend all arms transfers to the coalition.

5) Syria – Department of Defense Should Investigate Civilian Casualties. In July a US-led military coalition officially recognized that its 2017 aerial bombardments killed 77 civilians in Raqqa. Amnesty International urges the Pentagon to follow up on those findings and investigate more broadly all claims of civilian casualties caused by the Raqqa offensive, as well as by all U.S. military operations going forward. Daphne Eviatar, Amnesty International Director of Security with Human Rights said, “Victims and survivors in Raqqa are living with the unimaginable pain of having lost their loved ones with no explanation for the cause of their deaths and no accountability. The Department of Defense should now work with the Coalition to conduct independent and impartial investigations and provide reparations to victims and families of victims.”

7) Mauritania – Trump Administration Should Halt the Deportation of Asylum Seekers. Amnesty International calls on the Trump Administration to stop deporting, without fair consideration for their claims of protection, Mauritanians who have sought refuge and safety in the U.S. A March report estimates that in 2016 up to 43,000 Mauritanians were living in slavery. The Mauritanian government has arrested journalists, anti-slavery protesters, and other opposition activists in a crackdown on dissent. Adotei Akwei, Africa Advocacy Director said, “The deportation of individuals back to an environment where they risk possible enslavement shows disdain for their human dignity and basic human rights and a complete violation of international law that flies in the face of decades of US traditions.”

9) Argentina – Senate Fails to Protect Women’s Reproductive Rights. On August 9 the Argentinian Senate voted against legalizing abortion for pregnancies up to 14 weeks. An estimated 500,000 clandestine abortions are performed annually and cause 30 percent of maternal deaths in Argentina. Hundreds of thousands of activists took to the streets in Buenos Aires and in cities around the world to show solidarity with Argentine women. Although the Senate vote was a major disappointment, it represents a stepping stone, not a setback in the fight for women’s rights in Argentina and Latin America. 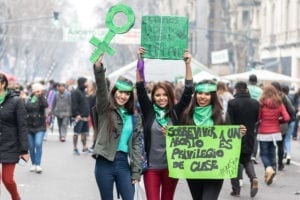 10) Amnesty International Urges Co-Sponsorship of International Violence Against Women Act. The International Violence Against Women Act (“IVAWA”) prioritizes ending violence against women and girls as a part of U.S. foreign policy. Amnesty International calls on Congress to support the IVAWA (S. 2120 and H.R. 5034). One in three women will experience violence in her lifetime. About 130 million girls and women worldwide have suffered genital mutilation. Each year, two million girls under 15 years old are sold or coerced into prostitution. IVAWA is a budget-neutral bill that would establish a clear Global Strategy on how to combat violence, make the Office of Global Women’s Issues a permanent fixture in the State Department, develop comprehensive Country Plans, and lead to regular reports and briefs for Congress on violence against women and U.S. efforts to prevent it.

11) Upcoming Events – Amnesty Country Directors Will Visit Washington, D.C. On September 24 Amnesty International will hold a Hill briefing featuring Amnesty Directors of Argentina, Kenya and Ukraine. In addition, they will be joined by Amnesty Directors from Burkina Faso, Hungary, and Israel who will be in Washington, D.C. September 24-25. If you would like to schedule a meeting with any of the Amnesty Country Directors, please contact Meredith Cullen at [email protected].