2) During Trip to the Middle East, Secretary Pompeo Condones the Murder of Jamal Khashoggi and Human Rights Abuses Committed by the Sisi Regime

1) Amnesty International USA Urges Congress to Protect the Human Rights of Refugees by Declining Funding for the President’s Border Wall – Amnesty International USA strongly urges Congress not to appropriate any funds for the President’s border wall or any additional border militarization that will make it more difficult for asylum seekers to access protection. To provide a fair asylum process, Congress must press the U.S. government to end Remain in Mexico and ensure that asylum seekers are able to promptly and safely request protection in the U.S. without unnecessary delay.

The Remain in Mexico deal violates international law and endangers thousands of families and children seeking protection. Instead of entering the U.S., thousands of asylum seekers are being forced to wait in Mexico while their asylum claims are processed. Mexico is not a safe country for all people seeking protection. Many asylum seekers face exploitation, sexual assault, or murder while being forced to wait for extraordinarily long times in northern Mexico.

Above: On January 8 Amnesty International protested the President’s border wall and called on him to create policies that treat families and children with dignity, fairness and respect.

2) During Trip to the Middle East, Secretary Pompeo Condones the Murder of Jamal Khashoggi and Human Rights Abuses Committed by the Sisi Regime. On January 9 Secretary of State Mike Pompeo gave a major address in Cairo outlining the administration’s Middle Eastern foreign policy. Amnesty International USA sent a letter ahead of Secretary Pompeo’s trip calling on him to raise the murder of Jamal Khashoggi and the imprisonment of thousands of other human rights defenders in the Middle East. Amnesty International has called Egypt an “Open-Air Prison for Critics,” as people are criminalized for peacefully expressing their opinions. The measures undertaken by Egyptian President Sisi are harsher than anything seen during former President Mubarak’s repressive 30-year rule. 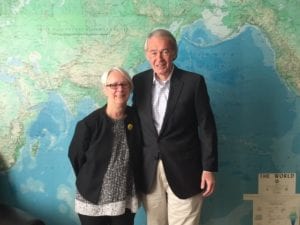 4) Amnesty International USA’s National Security Priorities for 2019 – Amnesty International USA is calling on Congress to 1) cut off assistance to the Saudi coalition that has killed civilians in Yemen; 2) press the Department of Defense to acknowledge civilian causalities caused by its military operations in Syria and demand more oversight over its lethal actions in Yemen, Somalia and Libya; and 3) hold hearings highlighting the problems of indefinite detention in Guantanamo and lift restrictions on transfer for trial and medical treatment.

5) United Nations – Human Rights Groups Condemn the Trump Administration’s Refusal to Cooperate with U.N. Investigators. Responding to a report in The Guardian indicating that the State Department has ceased responding to formal queries from United Nations’ human rights investigators, Amnesty International USA joined eight other prominent human rights NGOs to urge Secretary Pompeo to cooperate with the Special Rapporteurs. In a separate statement, Amnesty International USA highlighted the important work of the U.N. Special Procedures system and said that the Trump administration’s decision would risk providing human rights abusers with an excuse to ignore U.N. investigations into human rights violations throughout the world.

7) Mauritania – Asylum Seekers Face Possible Enslavement If Deported. Despite the backlog in immigration courts amidst the government shutdown, ICE agents continue to detain immigrants, including four Mauritanians who had been allowed to remain in the U.S. with work permits. A 2018 Amnesty International report found that slavery and racial discrimination remain rife in Mauritania. If ICE deports these asylum seekers, they could face possible enslavement back in Mauritania.

8) Rwanda – Amnesty International Celebrates Acquittal of Diane Rwigara As Victory for Human Rights. On December 4 the Lantos Commission held a briefing on human rights and political prisoners in Rwanda. Adotei Akwei, Amnesty International USA Africa Advocacy Director, testified about Diane Rwigara’s case. Just two days after this briefing, Rwigara was acquitted by the High Court in Kigali. After announcing her intention to run for President against incumbent Paul Kagame in 2017, Rwigara faced an online shame and smear campaign before being disqualified. Rwigara and her mother were detained for a year on charges of fraud and inciting insurrection. 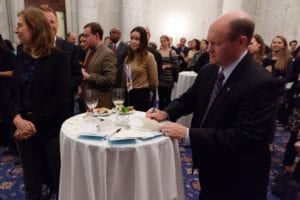 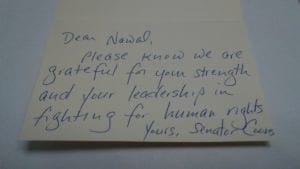 Above: On December 10 Representative Jackson Lee (TX-18) gave remarks on how Congress can support human rights at home and abroad (Amnesty International USA Executive Director Margaret Huang in the background).

Above: On December 10 Representative Ros-Lehtinen (FL-27) promoted a Ukrainian human rights defender at the celebration of the Universal Declaration of Human Rights.

10) The Hill Names Amnesty International USA As Top Lobbyists of 2018. On December 13 the Hill named members of Amnesty International USA’s Advocacy and Government Affairs team to its list of top lobbyists of 2018. The list included Joanne Lin, National Director of Government Affairs, Francisco Bencosme, Asia Advocacy Manager and Ryan Mace, Grassroots and Refugee Specialist. The list honors “the most distinguished and accomplished professionals from the influence world who are on the front lines of the nation’s most consequential political and policy battles.”