Amnesty International has documented an alarming escalation in attacks and abductions in several states in north west and north central Nigeria since January 2020. The causes behind the violence in Nigeria’s Middle Belt are numerous and complicated, however addressing the lack of good governance and a security force that continues to enjoy total impunity, even after decades of documented human rights abuses, must be priorities for Nigeria and the global community. 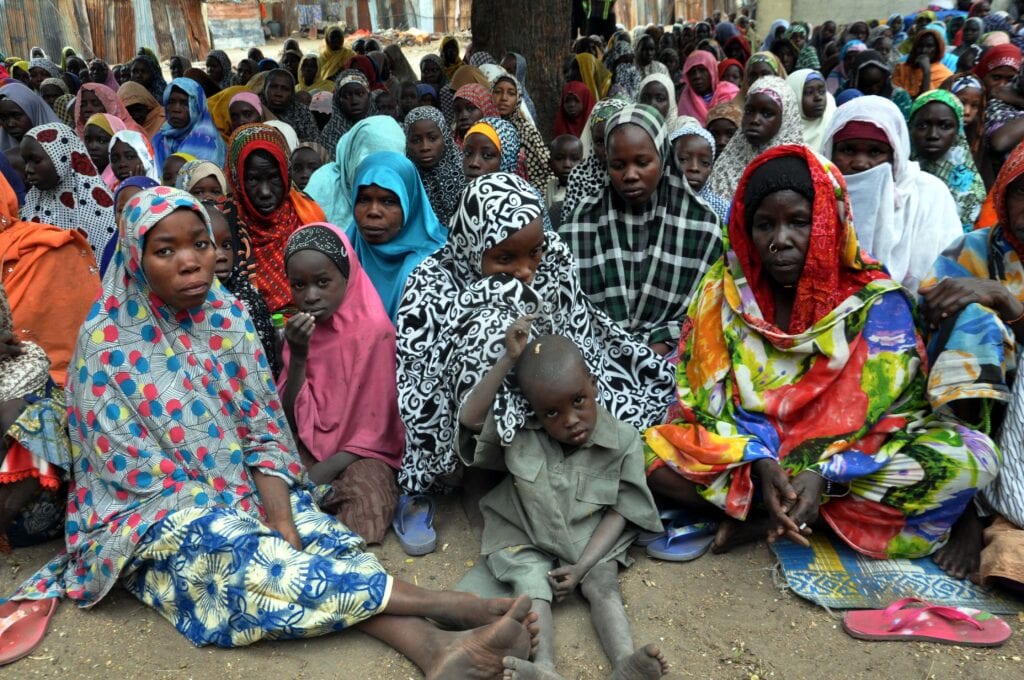 Women and children at a camp for internally displaced persons in Borno State North East Nigeria, May 2018

Statement from Amnesty International USA for

On behalf of the members of Amnesty International in the United States and around the world, I would like to thank the Lantos Commission for holding these important and timely hearings. The Lantos Commission has been a steadfast champion on human rights issues and has always been up to the task of shining a light on human rights issues, asking the tough questions  and also allowing ideas to be aired on how the United States, the global community and the governments responsible for addressing the human rights should best proceed.

Today is no different. Effectively addressing the violence in Nigeria’s Middle Belt will not be easy and will require support from its allies as well as resources to address the underlying drivers and to respond to the humanitarian crisis. However, it will also  require leadership and commitment from the Nigerian government and transparency and accountability from its security forces. The tragedy in the Middle Belt is a stark manifestation of decades of lack of good governance and opacity within the security forces, on top of underlying “climate” and human challenges.  Unless those dynamics change, we could find ourselves discussing even greater levels of violence and insecurity in the middle Belt five years from now.

Chairman McGovern and Chairman Smith, as you know, Nigeria is Africa’s largest country by population,  the continent’s largest economy, and it possesses Africa’s seventh largest military. It has played pivotal roles in numerous peacekeeping operations in the past 20 years and is considered by many to be a leader on the continent. Simply put, what happens in Nigeria matters, for Africa and for the world.

Unfortunately, Nigeria also faces high and increasing levels of  instability and violence. In the northeastern states of  Borno, Adamwa,  and Yobe,  the 11-year conflict with the armed group Boko Haram continues to rage, as was graphically shown by last week’s abduction of schoolboys  from the Government Science Secondary School of Kankara in Katsina state despite numerous declarations of victory by the administration of Nigerian President Muhammdu Buhari.

In the Middle Belt, which includes the states of Adamawa, Benue, Kaduna, Taraba, and Zamfara, the country has also been roiled by  violent clashes between members of farmer communities and members of herder communities  over access to resources such as water, land and pasture.

Insecurity in the field as well as policies and practices by the Nigerian government and security forces have made reporting accurate numbers extremely difficult, and the impacted regions of both conflicts overlap, but estimates are that Nigeria is now home to over two million internally displaced persons. The probable cost in lives is appalling; in August, we estimated that 1, 126 people had been killed as a result of intercommunal violence and banditry and the failure of Nigeria’s security forces to fulfil their responsibilities to protect.

In 2018, Amnesty International published a report entitled Harvest of Death: Three Years of Bloody Clashes between Farmers and Herders in Nigeria. The report highlights key failures by the security forces, including a culture of impunity, and a failure to provide adequate relief rehabilitation and a humanitarian response. We outlined instances where the security forces had failed villagers through being withdrawn just before attacks, failing to arrest attackers,  abandoning villagers who had sought their protection and by committing human rights violations themselves.

Over two years later, those failures continue. On December 11, the New York Times reported  the execution of more than 70 farmers from the village of Zabarmari, by Boko Haram, highlighting how the villagers had struggled for years to survive between the army and Boko Haram and had now paid a terrible toll. Our August statement  noted that houses are being burned, villagers are being abducted, and some villagers are being arrested for daring to seek better protection. Insecurity has increased in the rural areas and is so widespread it is contributing to a humanitarian crisis due to increased food insecurity, as farmers cannot work. Amnesty also noted that given how long these attacks have been going on, the failure of the security forces to take sufficient steps to protect villagers from these predictable attacks is “utterly shameful”.

Chairman McGovern and Chairman Smith, no one is saying that  ending the violence in the Middle Belt is easy, and Amnesty International is not in the business of “Monday morning quarterbacking”, but it is safe to say that in addition to th failures of the security forces on the ground, the crisis in the Middle Belt has also been exacerbated by the Buhari administration’s zealous opposition to transparency and accountability. You cannot correct or improve your performance and outcomes if you do not allow  your methods, tactics and execution to be evaluated, and you cannot shape an effective response to a crisis if you do not listen to the people impacted by that crisis.

Unfortunately, the Buhari administration has chosen to maintain the practices of many of its predecessors by focusing on shutting down internal criticism and demonizing calls for accountability for the security forces. In Amnesty International’s  Endangered Voices report, released in October 2019, we highlight how the Buhari administration was aggressively working to crush civic space and silence the independent media voices that were trying to expose concerns with policing and the performance of the military.

It should be noted that efforts to secure security sector reform were on full display for the global community in October and November in the form of the nonviolent #ENDSARS protests. And as expected, those protests were met with brutal force by the very same security forces, leaving at least 56 people dead and hundreds injured.  If the SARS protests did not underscore the scale of Nigeria’s security sector impunity problem is, then the announcement from the International Criminal Court that it has concluded a 10 year preliminary investigation and would consider further action should serve as a final alarm that something must be done.

Today’s hearing will highlight several factors contributing to the crisis in the Middle Belt. All of them will need attention, but addressing all of those issues will depend on whether there is transparency and accountability  within Nigeria’s security forces and from the Buhari administration.