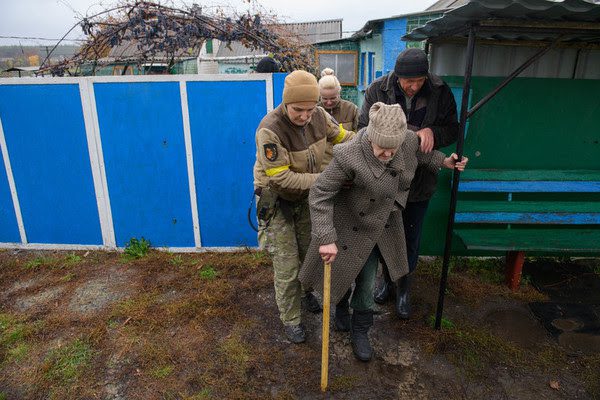 An older woman with a disability being evacuated in Kharkiv region, Ukraine. October 2022. (Photo by Amnesty International)

On December 6, Amnesty International released a report chronicling the disproportionate risks faced by older civilians in Ukraine in the aftermath of the Russian invasion. “I Used to Have a Home” documents how the Russian government’s act of aggression against Ukraine has resulted in massive consequences for older Ukrainians who are unable to flee conflict-affected areas. Older Ukrainians are more likely to live on below-subsistence earnings, thereby often relegating them to substandard housing after their displacement. They are relatively more likely to depend on the medical infrastructure, which has been battered by sustained Russian attacks in Ukraine as hospitals lack electricity or running water and are sometimes forced to operate under candlelight. Older Ukrainians have also made up a disproportionate number of civilians killed in the hostilities. To support older Ukrainians at grave risk, Congress should:

As Congress moves to pass a spending bill prior to the end of this year, Amnesty International USA encourages Congress to ensure the following priorities are included in any funding package in order to ensure the protection of people seeking safety:

In 2012, the Tom Lantos Human Rights Commission, in conjunction with the U.S. Commission on International Religious Freedom and Amnesty International USA, created the Defending Freedoms Project (DFP) to support Prisoners of Conscience around the world. The DFP aims to increase attention to human rights abuses by encouraging members of Congress to advocate on behalf of Prisoners of Conscience wherever they may be found. Amnesty International urges Congress to take on a prisoner’s case by contacting the Tom Lantos Human Rights Commission at [email protected].

NEW CAMPAIGN ON ACCOUNTABILITY FOR SURVIVORS OF SEXUAL VIOLENCE IN ETHIOPIA

On November 25th, Amnesty International launched a campaign called “I Don’t Know If They Realized I Was A Person” – Survivors of sexual violence in the conflict in Northern Ethiopia speak out. The campaign stems from Amnesty’s reporting, and it highlights the stories of ten survivors of sexual violence. Amnesty International welcomes the signing of the peace agreement as an important step but continues to advocate for accountability for the many crimes committed during the conflict. On December 2nd, Amnesty held an exhibition on the Hill highlighting the stories of survivors. The exhibition can be viewed virtually here. Amnesty calls on Congress to prioritize accountability for crimes committed during the conflict in Congressional action on Ethiopia.

Gender/Indigenous Rights and all other issues: Tarah Demant