Amnesty International USA calls on the future Biden administration to adopt a bold, transformational strategy that places human rights at the forefront of all domestic and foreign policies. Our suite of 80 policy recommendations cover a wide array of human rights issues – thematic, domestic, international, regional, and country-specific. Our recommendations range from requiring U.S. law enforcement to reserve deadly force as a last resort to providing debt relief to the poorest nations suffering under the COVID-19 pandemic, from ending U.S. arms sales that fuel war crimes abroad to rebuilding a humanitarian protection system that aids people at the U.S. border as well as those seeking safety around the world.  Read our full report and recommendations.

Amnesty International’s Nov. 9 letter to the Senate Foreign Relations Committee (SFRC) outlines our international human rights priorities for 2021. We urge Congress to pass legislation to protect international human rights amidst the COVID-19 pandemic, to block arms sales to the Saudi-UAE coalition engaged in atrocities in Yemen, to halt Myanmar authorities’ atrocities against the Rohingya, to permanently repeal discriminatory immigration and travel bans, and to permanently repeal the Global Gag Rule and Helms Amendment.

As the U.S. battles the worst pandemic in a century and as the U.S. COVID-19 death toll surpasses 270,000, the President and Congress must come together to pass an urgently needed relief package before the end of 2020. We urge Trump administration officials to accede to an orderly transition to ensure that the incoming administration has access to all information concerning vaccines and other public health matters.

No Deployment of DHS law enforcement and Military Forces in Response to U.S. Election-Related Protests

Amnesty International has sent letters urging Acting DHS Secretary Chad Wolf and Acting Defense Secretary Christopher Miller to refrain from deploying DHS law enforcement agents and military forces, respectively, in response to any protests related to the recent U.S. presidential election. We call on all lawmakers to condemn incitement to violence; to guarantee the right to peacefully protest and dissent; and to stop gun violence and police violence.

Ethiopia’s internal turmoil reached new heights as the federal government of Prime Minister Abiy Mohammed launched a full-scale military offensive against the Tigray People’s Liberation Front (TPLF) led regional government in the state of Tigray that no longer recognizes the authority of the federal government after its constitutional term was extended beyond October 10. Both sides have accused each other of atrocities and Amnesty International has already confirmed a massacre where possibly as many as 500 people in Tigray were slaughtered by forces loyal to the TPLF. The Ethiopian government confirmed it had engaged its air force and the TPLF confirmed it had launched missiles in to neighboring Eritrea and in the Ethiopian state of Amhara. Over 45,000 people have fled into neighboring Sudan and there are reports of reprisal attacks against Tigrayans in other parts of the country.

Amnesty International is calling on both Prime Minister Abiy and the de facto TPLF leadership to take steps to protect civilians, ensure that human rights are respected and allow unimpeded humanitarian access to the support internally displaced persons.

We urge Congress to provide increased humanitarian assistance to Sudan, call for respect for human rights in Ethiopia, and urge the Trump administration to assemble international, regional, and domestic leaders in Ethiopia to press for an immediate end to the hostilities and engage in inclusive dialogue to nonviolently address the underlying drivers of the conflict.

Nigeria continues to grapple with youth led demands for accountability and reform of the country’s police in particular the Special Anti-Robbery Squad (SARS) While President Buhari disbanded the unit in October, he redeployed members  to other police units around the country and ignored demands for accountability for decades of abuses by SARS members. The government’s brutal response to the protests led over 17 lives lost and scores being detained. While several Nigerian states have launched inquiries in to alleged abuses the Buhari administration is arresting protest organizers, freezing their bank accounts and seizing passports.

Amnesty international is calling on Congress to support the nonviolent effort to secure police reform. In the House, we urge Members of Congress to support and pass the H. Res. 1216  which was introduced by Representatives Green (D-TX) and Castro (D-TX). In the Senate we are asking senators to join a Dear Colleague letter to President Buhari initiated by Senator Menendez (D-NJ) calling on his administration to respect the right to non-violent protest, and to implement the calls being made protestors. 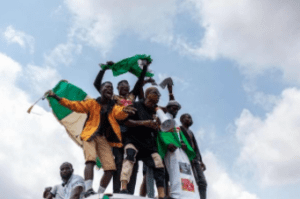 Nigerian youths seen waving the Nigerian national flag in front of a crowd in support of the ongoing protest against the unjust brutality of The Nigerian Police Force Unit named Special Anti-Robbery Squad (SARS) in Lagos on October 13, 2020. – Nigerians took to the streets once again on October 13, 2020, in several cities for fresh protests against police brutality, bringing key roads to a standstill in economic hub Lagos.

Indigenous rights in the Americas under attack

On Nov. 20, Amnesty International submitted a statement for the Lantos Commission’s hearing on Indigenous rights in the Americas, documenting the threats posed by COVID-19 and large-scale economic projects to the survival of Indigenous communities across the region. Our statement is available here.

After mass rights violations by police, the Chilean people vote to formulate a new Constitution

In October 2020, Amnesty published a comprehensive investigation documenting government abuses against Chilean people during the historic social protests of 2019. A year after these protests took place, the Chilean people voted to formulate a new constitution. Amnesty International is calling for Chile to adopt a constitution based on respect of and guarantee for human rights and for structural reform to Chile’s police force.

Senate must reauthorize Violence Against Women Act Before Year’s End

The Violence Against Women Act (VAWA), which funds most programming and services in the US to combat sexual and domestic violence, remains stalled in the Senate, threatening services to survivors across the country. Two competing versions exist in the Senate. Amnesty International strongly calls for the Senate to pass S. 2843, the version of VAWA that would expand tribal jurisdiction over non-Indians to include crimes of sexual assault, stalking, sex-trafficking, and child abuse, better protecting Native American women. The competing VAWA reauthorization introduced would roll back protections for Native women, making Native women more vulnerable to violence; Amnesty International opposes this version of the bill. Amnesty International strongly urges S.2843 to be passed immediately, reauthorizing the Violence Against Women Act without delay.

28 Children at imminent risk of deportation

Twenty-eight children and their parents have been detained in ICE family detention facilities during the COVID-19 pandemic, many for nearly a year-and-a-half, and have been denied the chance to seek asylum after being subjected to rules and policies federal courts have since declared are unlawful. They are now at imminent risk of deportation. Amnesty International, along with a coalition of other organizations, is calling on Congress to tell DHS to halt the deportations and give these families the chance to seek asylum they never received. For more, see this letter.

Steven Tendo is an ordained minister who has been detained for nearly two years by ICE in the Port Isabel detention facility, where they have been outbreaks of COVID-19. He is diabetic, and inadequate medical care in detention has left him with a compromised immune system. ICE officers have been consistently telling him that he is going to soon be deported, despite an agreement not to remove him until the Fifth Circuit rules on his case. This has taken an extreme toll on his mental health and for the first time, he has high blood pressure. Amnesty calls on Congress to urge ICE to release him, so he can pursue the right to seek asylum in safety and with adequate access to medical care.

Amnesty International USA applauded the passage of the Libya Stabilization Act (H.R. 4644) on November 18. If passed into law, the Libya Stabilization Act could finally mean accountability for individuals who commit human rights violations and war crimes, violate the arms embargo in Libya, or threaten the peace, security, and stability of in the country. The passage of this bill creates a much-needed reporting mechanism on foreign interference in Libya, including for those who provide military support in violation of the United Nations arms embargo, threatening civilian lives. This bill directly addresses the root causes of the conflict and could have a meaningful impact on the human rights situation in the country. Amnesty International USA is calling on the Senate to pass the bill and send it to the President before the end of the year.

In Case You Missed it

In advance of Human Rights Day, Amnesty International hosted a special virtual briefing marking the human rights challenges to come in 2021. The event included special opening remarks on human rights in the 117th Congress from Members of Congress. Watch the full event here.

What Should Lawmakers Do To Observe Human Rights Day?

In celebration of the 72nd anniversary of the signing of the Universal Declaration of Human Rights, Amnesty International urges all lawmakers to:

Please don’t hesitate to reach out to any of our experts or email [email protected] for a general inquiry.

All other issues: Joanne Lin