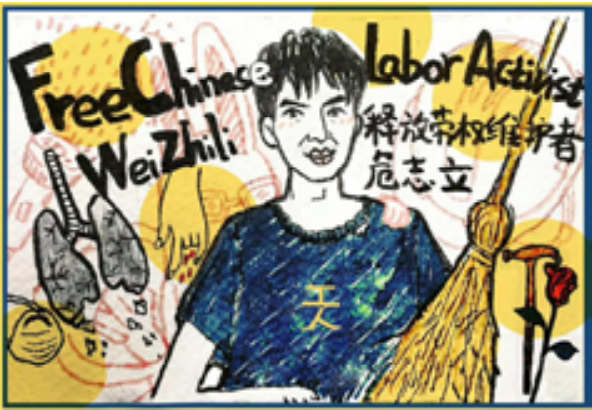 Wei Zhili and Ke Chengbing are editors of “New Generation” (xinshengdai), a website on monitoring and reporting the situation of rural migrant workers in China. New Generation also uses other mainland Chinese social media platforms to disseminate information about employment and labor laws and occupational safety and health. A lot of their recent work was focused on the plight of the workers from Hunan province who contracted silicosis due to lack of occupational health safety protection in the factories.

Wei Zhili has been committed to labor rights and feminist issues since he graduated from university in 2001. Upon his university graduation, he worked in Hand-in-Hand Workers’ Activity Centre (手牵手工友活动室) in Shenzhen providing legal advice, representation and organizing support to workers. Police have
reportedly told him and other labor activists that labor activism is “disturbing social order” and “speaking for workers is anti-Communist and counter-revolution”.

Ke Chengbing aka “Laomu” (Old Wood) is one of the founders of “New Generation” (xinshengdai) and has worked for the organization since then. He graduated in 2012 from Jinan University, where he has been active in grassroots human rights movement as a student activist. After graduation, he committed to worker’s rights issues in South China, conducting investigative research on working conditions in Foxconn after a series of suicides of its employees.

Activists and human rights defenders continue to be systematically subjected to monitoring, harassment, intimidation, arrest and arbitrary detention. Police hold an increasing number of human rights defenders outside of formal detention facilities, sometimes without access to a lawyer for long periods, exposing the detainees to the risk of torture and other ill-treatment