We are proud to announce these winners in the CVT & Amnesty International Youth Poster Contest, who shared their art to help close Guantánamo. 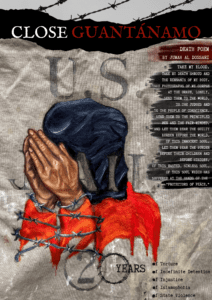 I strongly advocate for the closure of Guantánamo Bay Prison as I believe it is a place that symbolizes the failure of the United States to meet its obligations and promises to uphold human rights both on its soil and overseas.

Guantánamo is instrumentalized as a legal loophole and operates as a law-free zone. It is used as an offshore detention facility beyond the confines of the Geneva Convention and considered as not being subjected to any jurisdiction. Not only are the inmates denied the right to a fair trial, they are also tortured and live under inhumane conditions.

U.S. president Joe Biden – like his predecessors who also stated the need for the closure of Guantánamo – has yet to order the closing of this abhorrent facility and the release of the 39 remaining prisoners. I believe that it is crucial for civil society groups, human rights activists, individuals, and artists to continuously put pressure on the US government to end this dark chapter of US history and to restore justice. 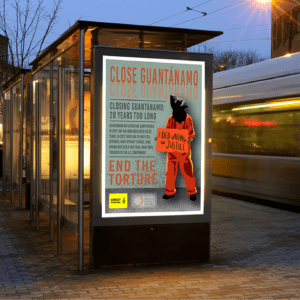 The entire U.S. prison system is corrupt. There is too much focus on punishment and not enough on rehabilitation. It’s so easy for the system to fail when the terrible reality of what’s going on is shielded from the public eye. Because we can’t see these things they often get ignored and unfortunately that is true of the people who were/are incarcerated as well. The ongoing torture of the remaining inmates at Guantánamo Bay continues even though they have not received fair trial. Leaving Guantánamo open only leaves room for more hate and injustice to spread. We need to end the injustice. 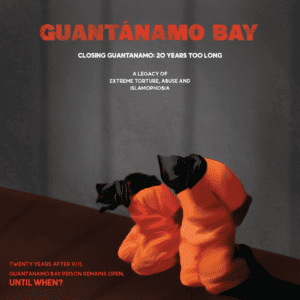 I care about all the Guantánamo’s detainees that are held captive for the crime they didn’t commit. U.S. opened Guantánamo back in January 2002 to hold people perceived to be ‘enemy combatants’ involved in 9/11 attack. How is this justified to still hold innocent people as detainees even after 20 years of 9/11? As a Muslim and as a human it’s my job to use my power of any sort, be it my voice, my actions or my art to fight against this extreme abuse and torture. I have read a few stories about the detainees of Guantánamo and that really pushed me to raise my voice through my art. We are living in 2022 and we need to raise our voices.

About the Youth Poster Contest

January 11, 2022, marked 20 years since the detention center was opened. 780 Muslim men and boys have passed through its doors over the past two decades, and today there are 39 men still detained, most without charge, none having received a fair trial. Many were tortured by the U.S. government. Senior government officials have already recommended releasing 18 of the men, yet they, too, remain behind bars.

President Biden has promised to close the facility, but he hasn’t done it yet, and doesn’t seem to be making it a priority.

Art is a powerful medium for telling a story and inspiring others to take action. Over its 20 years of existence, many men held in Guantánamo used art to tell their stories, and to survive. Because of the power of art, Center for Victims of Torture and Amnesty Int’l asked artists 30 years and younger to submit posters to help convince President Biden to take action and close Guantánamo Bay Prison. In addition, artist Sabri Al Qurashi, who was formerly detained at Guantánamo, was the final judge. We applaud the talent and vision of these artists!