Amnesty International in the Lives of David and Joy Peyton 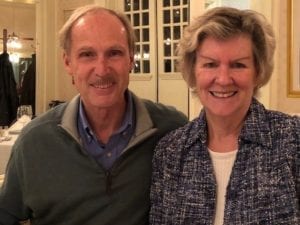 How did you first come to support Amnesty International?

In 1977, Amnesty International won the Nobel Peace Prize. About a year later, David had a chance to hear Sean MacBride, who had recently stepped down as Chairman, speak to a conference and to shake his hand. MacBride had won the same prize individually three years earlier.

Amnesty International has 10 million supporters worldwide. What is it about the organization that, you think, has successfully brought people together for over 50 years?

We’ve been reading The Eight Laws of Change by Stephan Schwartz. Amnesty seems to live out those laws well. Schwartz notes how effective Quakers have been, small as they are as a group. So it’s not surprising that Quakers were involved in Amnesty’s founding! Change agents need to have common intentions — know that they may not live to see the fruit of their work, may not get individual credit, practice equality and nonviolence, and act from life-affirming integrity.

How does the mission of Amnesty International align with your personal values?

We’re Christians, and we support liberal democracy. When we were young, Spain and Portugal suffered under strongman rule. Look at them then, and look at them now. Christian prison ministry, which David has been involved in, has roots going back to St. Paul’s imprisonments; parts of the New Testament are prison literature. Such ministries work primarily toward the rehabilitation of those justifiably imprisoned. But what about all the people who never should have been imprisoned in the first place? Beyond individual cases, the foremost U.S. Christian of the 20th Century, Martin Luther King, spoke all the time about justice in the general, positive, social sense, even as he led the struggles against injustice.

Is there a specific case (or cases) or a campaign that, in your view, best exemplifies the importance of Amnesty’s work?

Amnesty’s light seems to shine the brightest the more outrageous the case is, and the more orphaned the prisoner would be without Amnesty to plead his or her cause — the blogger in Saudi Arabia sentenced to be lashed each week; women who have been raped in Central America or elsewhere; the reformist or crusading city councilwoman in Rio de Janeiro who was apparently murdered. Unjust authoritarian governments expect to get away with their misdeeds, believing that no one will notice or that no one will have the staying power that they think they have. David had the most personal involvement with a case that involved a man named Switon, who published an underground newsletter in then-Communist Poland. Police seized him coming out of church on a Sunday morning. Amnesty made such a stink that the authoritarians decided it wasn’t worth it to keep him in prison and let him go.

On a broader scale, Amnesty was on the case of widespread mistreatment of Muslim Uighur people in western China earlier than anyone else. Now we have the satellite photos of damaged mosques and destroyed cemeteries and photos of the buildings for “re-education.” Amnesty was on target all along.

What is it about Amnesty International that compelled you to increase your gift this year?

We see no way of avoiding the conclusion that reduced injustice is a key dimension in building any kind of justifiable, sustainable future for humanity – along with reduced environmental damage, better public health, better water and sanitation, limiting excess population, better education, and women’s rights. People need to focus on solving real problems and meeting real needs instead of living in fear or living in prison. Beyond the screaming intrinsic wrongness of the typical Amnesty case, humanity must learn to live better on Earth, in flourishing ways.

Joy’s work in early language education, focused on children’s mother tongues (the languages that they speak at home and in their communities) has taken her to Ethiopia, Nepal, and The Gambia. In all of these countries, success in developing effective programs for children to learn depends on respecting the languages and cultures that they bring to school and giving them opportunities to develop as multilingual, multicultural individuals. Amnesty International is dedicated to understanding and respecting the resources that students, teachers, and administrators bring to the educational enterprise, and we are very grateful for this dedication.