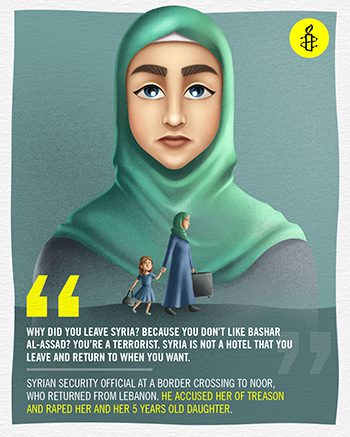 Syrian security forces have subjected Syrians who returned home after seeking refuge abroad to detention, disappearance and torture, including sexual violence, Amnesty International said today. In a new report, “You’re going to your death”, the organization documented a catalogue of horrific violations committed by Syrian intelligence officers against 66 returnees, including 13 children. Among these violations, Amnesty International documented five cases whereby detainees had died in custody after returning to Syria, while the fate of 17 forcibly disappeared people remains unknown.

With a number of states – including Denmark, Sweden and Turkey – restricting protection and putting pressure on refugees from Syria to go home, the harrowing testimony in Amnesty International’s report is proof that no part of Syria is safe to return to. Returnees told Amnesty International that intelligence officers explicitly targeted them for their decision to flee Syria, accusing them of disloyalty or “terrorism.”

“Military hostilities may have subsided, but the Syrian government’s propensity for egregious human rights violations has not. The torture, enforced disappearances, and arbitrary or unlawful detention which forced many Syrians to seek asylum abroad are as rife as ever in Syria today. What’s more, the very fact of having fled Syria is enough to put returnees at risk of being targeted by authorities,” said Marie Forestier, Researcher on Refugee and Migrants Rights at Amnesty International.

Parties to the armed conflict in Syria continued to commit with impunity serious violations of international humanitarian law, including war crimes, and gross human rights abuses. Government and allied forces carried out indiscriminate attacks and direct attacks on civilians and civilian objects using aerial and artillery bombing, killing and injuring hundreds of people in Idlib and Hama in north-west Syria. Government forces continued restricting access to humanitarian and medical aid to civilians living in government-controlled areas.

Security forces arbitrarily arrested civilians and former fighters who had reconciled with the government and continued to detain tens of thousands of people, including peaceful activists, humanitarian workers, lawyers and journalists, subjecting many to enforced disappearance and torture or other ill-treatment, and causing deaths in detention. Armed groups working with the support of Turkey continued to subject civilians in Afrin to a wide range of abuses, including confiscation and looting of property, and arbitrary detention. They and Turkey were likely responsible for indiscriminate attacks during hostilities in north-east Syria.

In the same region, the Autonomous Administration carried out several arbitrary detentions.  The US-led coalition failed to investigate the many civilian deaths caused by its 2017 bombing campaign on Raqqa against the armed group calling itself the Islamic State (IS). Military offensives in north-west and north-east Syria internally displaced 684,000 and 174,600 people respectively. Tens of thousands of displaced people continued to live in makeshift camps, schools and mosques that did not provide an adequate standard of living.

Message to Denmark: Syria is Not Safe to Return Refugees

Hundreds of Syrian refugees, including children, have been told by the Danish Immigration Service to return to Syria, assessing that Damascus and the surrounding areas are safe to return to. At least 39 Syrians have received their final assessment in the Refugee Board – and are now in a deportation position.

But Syria is far from a safe country. Although military hostilities have diminished in most of the country, Syrian citizens continue to risk persecution and human rights abuses – including in Damascus and the surrounding area.

“In Damascus, the Assad regime has consolidated its power now, not with bombs, but with horrific human rights violations, extremely arbitrary arrests and extensive torture laboratories. Can our Prime Minister Mette Frederiksen guarantee the lives of Syrian refugees when they cross the border when the UN and the United States cannot? ” said activist, Dr Haifaa Awad.

The Mountain is in Front of Us and the Sea is Behind Us: The Impact of US Policies on Refugees in Lebanon and Jordan

When President Trump signed what has become known as the Muslim ban during his first week in office, he set into motion a series of events that continue to leave …

Human rights in the Middle East and North Africa: A review of 2018

As part of its brutal campaign against northern Iraq’s Yezidi minority, the armed group calling itself Islamic State (IS) committed war crimes and crimes against humanity when it sabotaged irrigation …

Syria: Raqqa in ruins and civilians devastated after US-led ‘war of annihilation’

From amid the rubble of Raqqa, civilians are asking why US-led Coalition forces destroyed the city, killing hundreds of civilians in the process of “liberating” them from the armed group …

As the Trump administration prepares to further expand the US’s lethal drone program, increasing the risk of civilian casualties and unlawful killings, Amnesty International is calling on four European countries …

“We leave or we die”: Forced displacement under Syria’s ‘reconciliation’ agreements

Whole civilian populations who have suffered horrific sieges and been subjected to intensive bombardments have been given no choice but to leave or die under so-called “reconciliation” agreements between the Syrian government and armed opposition groups, said Amnesty International in a comprehensive new report published today.

Thousands of civilians trapped in Raqqa, northern Syria, are coming under fire from all sides as the battle for control of the city enters its final stage, Amnesty International said following an in-depth investigation on the ground. The warring parties must prioritize protecting them from hostilities and creating safe ways for them to flee the frontline.

A chilling new report by Amnesty International exposes the Syrian government’s calculated campaign of extrajudicial executions by mass hangings at Saydnaya Prison. Between 2011 and 2015, every week and often twice a week, groups of up to 50 people were taken out of their prison cells and hanged to death. In five years, as many as 13,000 people, most of them civilians believed to be opposed to the government, were hanged in secret at Saydnaya.

‘It breaks the human’: Torture, disease and death in Syria’s prisons

Harrowing accounts of torture, inhuman conditions and mass deaths in Syria&rsquo;s prisons The horrifying experiences of detainees subjected to rampant torture and other ill-treatment in Syrian prisons are laid bare …