Hong Kong, a Special Administrative Region of China, maintains separate governing and economic systems from those of mainland China under the principle of “one country, two systems.” The Sino-British Joint Declaration signed by China and the United Kingdom in 1984 outlines terms of governance of Hong Kong for at least 50 years after the handover, until 2047. Under the agreement, Chinese national law does not generally apply in the region and Hong Kong is treated as a separate jurisdiction.

In March 2019, Hong Kong’s government introduced plans for changes to legislation that would enable criminal suspects to be extradited to mainland China. However, the bill received widespread criticism from many sectors of society concerned that it could undermine Hong Kong’s legal freedoms and might be used to intimidate or silence dissidents.

The people of Hong Kong repeatedly protested against the proposed extradition bill. Over a million people flooded the main streets in June and again in August 2019. Countless protests of smaller scale took place in other parts of Hong Kong. On June 15, the Hong Kong government announced it would indefinitely suspend the bill. Then, on September 3, 2019, Hong Kong Chief Executive Carries Lam announced that the controversial extradition bill would be formally withdrawn. But the protesters demands have broadened to include an independent investigation into the police use of force, withdraw the label of “riot” for the anti-extradition bill protests, release any arrested anti-extradition bill protesters and do not pursue any charges on them, and universal suffrage for all Legislative Council members and the Chief Executive.

The Hong Kong police used the violent acts of a small group as a pretext to classify the largely peaceful protest as an unlawful assembly and specifically a “riot.” Amnesty International verified numerous incidents involving the dangerous use of rubber bullets, officers beating protesters who did not resist, aggressive tactics used by police to obstruct journalists on site, and the misuse of tear gas and pepper spray. As of March 5, 2020, police had fired 19 live ammunition rounds, 1,863 sponge bullets, 1,999 beanbag rounds, 10,010 rubber bullets, and 15,972 tear gas canisters. 7,019 people were arrested as of January 16, 2020. Of those arrested, at least 40% were students and over 13% were under 18 years old. Amnesty International also documented evidence of beatings and torture in detention.

On June 30, 2020, China’s Standing Committee of the National People’s Congress (NPCSC) passed a new national security law for Hong Kong that entered into force in the territory the same day, just before midnight. The Chinese authorities forced the law through without any accountability or transparency: it was passed just weeks after it was first announced, bypassing Hong Kong’s local legislature, and the text was kept secret from the public and allegedly even the Hong Kong government until after it was enacted.

The national security law (NSL) criminalizes acts of “separatism, subversion, terrorism and collusion with foreign or external forces,” with offenses punishable by a minimum sentence of three years and a maximum of life imprisonment. The law also asserts jurisdiction over alleged offenses committed outside Hong Kong. The law is dangerously vague and broad: virtually anything could be deemed a threat to “national security” under its provisions, and it can apply to anyone on the planet.

For more information on Amnesty International’s work on Hong Kong, refer to the links below or contact the AIUSA China Coordination Group. 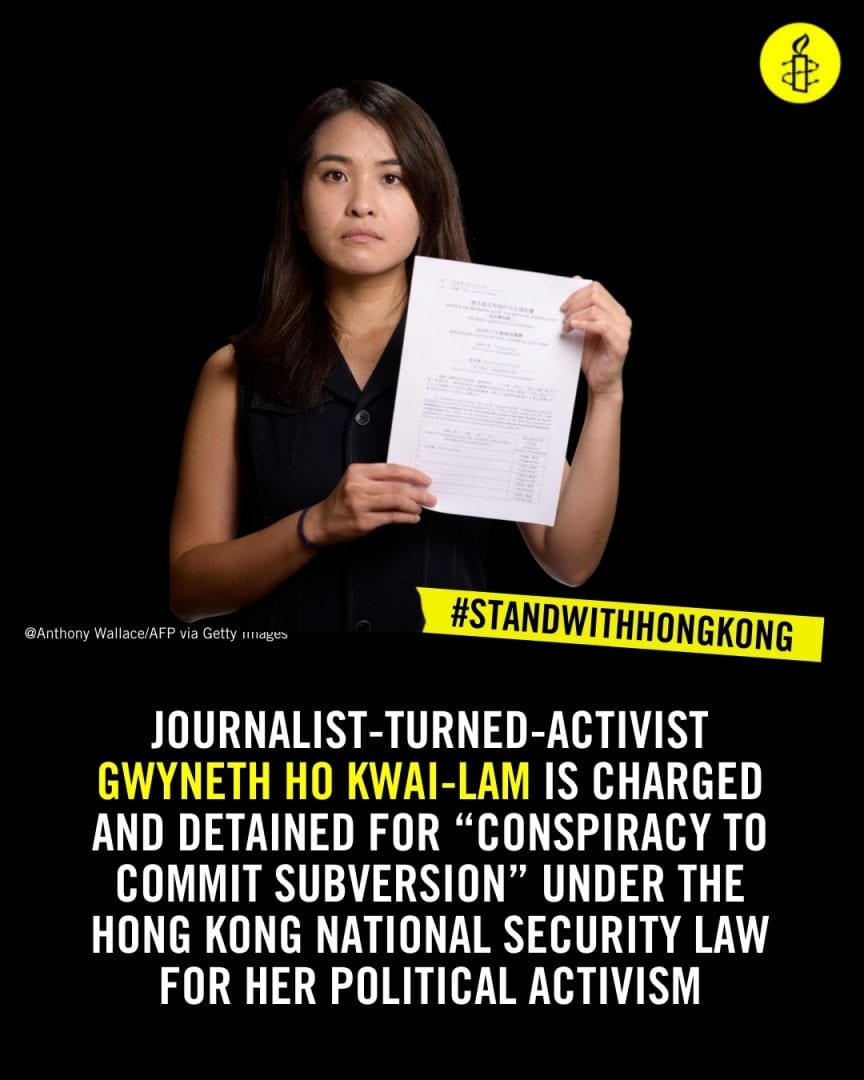 “I stopped being a journalist because I want to become an activist. I want to walk with people in Hong Kong.”

Gwyneth Ho is one of 47 people prosecuted for running in “primaries” in July 2020 organized by the opposition camp for the Legislative Council election.