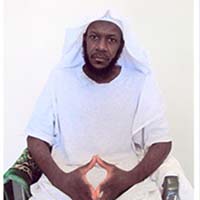 Mustafa al-Hawsawi was captured in Pakistan by Pakistani agents in March 2003 and was transferred to the custody of the United States He was held in secret CIA black sites until September 2006, when he was transferred to Guantánamo Bay and U.S. officials finally acknowledged his imprisonment.

Mr. al-Hawsawi faces the death penalty before a military commissions system that violates international fair trial standards, that fails to protect his human rights, and that frustrates the truth seeking process by impeding transparency and denying accountability for torture. He is alleged to have acted as a financier of the September 11, 2001 attacks in the United States. However, the Senate Torture Report disclosed an internal CIA cable which the chief of interrogations sent to CIA headquarters wherein he expressed reservations regarding Mr. al-Hawsawi&rsquo;s alleged role and involvement. This CIA chief interrogator observed that “he does not appear to the [redacted] to be a person that is a financial mastermind.&rdquo; Yet, Mr. al-Hawsawi faces the possibility of the death sentence imposed through an unjust system and procured via an unfair trial.

NGOs Redress and the Human Rights Monitoring Institute (HRMI) submitted a complaint calling for an investigation into allegations that Mr. al-Hawsawi was illegally transferred to and secretly detained and tortured in Lithuania as part of the CIA-led program. Redress and HRMI asked a Lithuanian prosecutor to conduct an effective investigation into the suspected criminal offenses committed in Lithuania against Mr. al-Hawsawi. The organizations requested the Lithuanian Prosecutor General to secure evidence, seek clarification from Mr. al-Hawsawi (via the U.S.), seek urgent preservation and disclosure of all relevant evidence, and identify all officials involved in the alleged violations with a view to ensuring they are prosecuted if, and as appropriate.

Mr. al Hawsawi has languished in solitary confinement at Guantánamo since 2006. Mr. al Hawsawi has yet to receive adequate treatment for his injuries. The military authorities responsible for his care have failed to remedy Mr. al-Hawsawi&rsquo;s chronic and severe medical conditions which include: a torn rectum that requires manual re-insertion of his rectal tissue after bowel movements; blood in his urine that could be indicative of a cancerous condition that has not been ruled out; severe and chronic headaches (cervicogenic disease), back and neck pain — all brought on by the abuse he suffered at the hands of the CIA. The military authorities imprisoning him have an ethical conflict between following military orders and exercising independent judgment regarding medical care; they persist in withholding medical information and refuse to discuss Mr. al Hawsawi&rsquo;s condition.

AIUSA has been unable to obtain personal stories from Mr. al-Hawsawi, because his experiences and mental impressions are considered classified. Mr. al Hawsawi is an avid reader and occupies his time in prison keeping up with current events around the world.