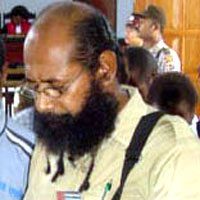 Imprisoned for Raising a Flag

Filep Karma is serving 15 years in prison for raising a flag. A prominent advocate for the rights of Indonesia’s Papuan population, Filep Karma was arrested for taking part in a peaceful ceremony on December 1, 2004, which included the raising of the Morning Star flag, a Papuan symbol.

Amnesty International considers Filep Karma to be a prisoner of conscience who has been imprisoned solely for the peaceful and legitimate exercise of his right to freedom of expression. Amnesty International is concerned at reports that Mr. Karma has been beaten by guards and has experienced serious health problems in prison. The organization calls on the Indonesian government to free Filep Karma and all other prisoners of conscience. 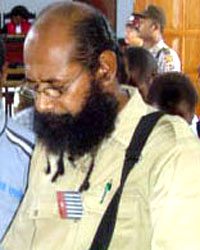 Filep Karma was one of hundreds to participate in a peaceful ceremony on December 1, 2004, to commemorate the 1962 declaration of Papuan independence. Indonesian police advanced on the crowd, firing shots and beating people with batons. Police bullets reportedly injured at least four people, and police reportedly beat a human rights monitor who was trying to photograph the police attack on the crowd.

After forcing an end to the ceremony, police arrested Filep Karma and reportedly beat and stomped on him during transport to the police station. A group of about 20 people were later arrested at the police station when they went to protest Mr. Karma’s arrest, but all were subsequently released, except for Yusak Pakage. Mr. Karma and Mr. Pakage were later charged with rebellion for their alleged role in leading and organizing the flag-raising event. In May 2005, a court sentenced Filep Karma to 15 years in prison and Yusak Pakage to 10 years on charges of treason for having “betrayed” Indonesia by flying the Papua flag. Yusak Pakage was released in July 2010 following a presidential pardon.