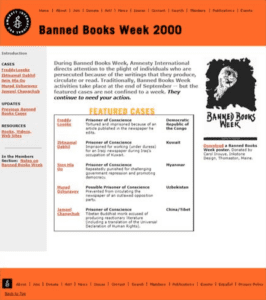 Banned Books Week was founded in 1982 by prominent First Amendment and library activist Judith Krug. Krug said that the Association of American Publishers contacted her with ideas to bring banned books “to the attention of the American public” after a “slew of books” had been banned that year. Krug relayed the information to the American Library Association’s Intellectual Freedom Committee and “six weeks later we celebrated the first Banned Books Week.”

Every September since 1990, Amnesty International has worked with partners during Banned Books Week to draw attention to writers, editors, librarians, publishers and readers who suffer human rights violations because of their work. Because of the proverbial “power of the word”, many journalists and artists are under attack around the world — by governments and opposition groups.

At Amnesty International USA, action for Banned Books Week was launched by Thesil Morlan a member of AI who organized a Local Group in Bath and Brunswick, Maine. Thesil also held many leadership roles including Country Specialist for Europe and Area Coordinator for Maine, where she helped to build a community of human rights activists. Right up until her death in 2011, Thesil prepared, organized, distributed, and promoted plans and resources for actions every year for this event.

A Tribute to Thesil Morlan

Thesil also found the time to be active in the Maine Alliance for the International Criminal Court and the United Nations Association of Maine; and to produce “Minerva”, a twice-yearly journal about women and world affairs sponsored by the World Federalist Institute of Citizens for Global Solutions.

Thesil brought a unique voice and personality to her work that left a profound impression and has continued to inspire those fortunate enough to know her. As Josh Rubenstein, former Northeast Regional Director for AIUSA remembered:

“Thesil brought a passion and sense of humor to this work that is difficult to explain. She could listen when we brought our concerns to her, and then respond with thoughtful and informed advice that always served us well. She could also express her concerns and proposals to us, and we always understood that if Thesil was looking for us to do something, then we had better be ready to take on a new project, or have a good reason why we could not. Her example and generosity made her a mentor and an inspiration to countless others. For us who survive her, our ongoing commitment to the defense of human rights will have to serve as our tribute to her magnificent resilience.”

Towards the end of her career, Thesil constantly faced physical and medical challenges and often had to endure severe pain; despite this suffering, she never complained.

The following excerpt was taken from a personal update from Thesil. We share this with you so you may have a glimpse into the person she was and how she approached her human rights work:

“Among my Amnesty tasks over Thanksgiving weekend: I wrote a letter from my AI group to the mother of an orthopedic surgeon who disappeared in Algeria 12 years ago, affirming our continuing effort to learn what has happened to him (even though the case apparently has been abandoned at other levels); and, as AIUSA’s EURAN coordinator, I sent to participating groups a “solidarity action” asking for supportive cards to go to a 13-year-old Romani girl who is trying to recover from an apparently racist attack on her home in Hungary, during which her mother died and she was injured. This is one of several strictly internal actions ahead of a longer-term campaign on the recent rise of violent attacks by non-state actors on Roma communities. Both actions are personal, confidential (not to be posted on the Internet or sacrificed to the agendas of outside networks). Neither case is being promoted as emblematic; both nevertheless are legitimate parts of larger strategies of human rights defense. Both are examples of the many kinds of Amnesty work that are best worked on by AI groups or that can be worked on effectively only by groups — devoting themselves to otherwise overlooked persons and paying focused, nuanced attention over time to matters that are not in the limelight of the moment.

I have always appreciated that Amnesty facilitated various levels of engagement by individuals, offering layered information and action options.”