1) Congress Must Not Fund the President’s Border Wall, Increase Border Militarization or Expand Immigration Detention Beds. With the February 15 deadline fast approaching, Amnesty International USA urges Congress to oppose any policies and practices that block asylum seekers from accessing humanitarian protection at the border, including a proposed border wall, an increase in border militarization and an expansion of immigration detention beds.

State of the Union (SOTU): Instead of offering a way out of gridlock, the President doubled down on his singular obsession with his border wall. In our response to the SOTU, Amnesty International USA made clear “No wall, no military buildup, no expansion of detention facilities, no pushbacks of people legally seeking asylum at the border. It’s time to come back to human rights and work for policies that treat all people and families with dignity.”

2) Amnesty International Delegation Documents Effects of Remain in Mexico on Asylum Seekers. In late January, Amnesty International sent a delegation to the southern border to document the effects of the Remain in Mexico deal on asylum seekers. The Remain in Mexico deal violates international law and endangers thousands of families and children seeking protection. Instead of entering the U.S., thousands of asylum seekers are being forced to wait in Mexico while their asylum claims are processed. Mexico is not a safe country for all people seeking protection. Many asylum seekers face exploitation, sexual assault, or murder while being forced to wait for extraordinarily long times in northern Mexico.

The delegation included the directors of Amnesty International USA, Mexico, Canada, Ireland, Norway and Belgium. They accompanied three LGBT minors to present their asylum claims at the San Ysidro port of entry. Upon approaching the San Ysidro port of entry, the delegation was stopped by Mexican and U.S. authorities who refused to allow the children to proceed any further to present their asylum claims. Amnesty International USA Executive Director Margaret Huang was eventually able to accompany the children to present their asylum claims. To provide a fair asylum process, Congress must press the U.S. government to end Remain in Mexico and ensure that asylum seekers are able to promptly and safely request humanitarian protection in the U.S. without unnecessary delay. 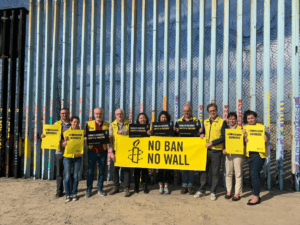 Above: On January 30 an Amnesty International delegation traveled to the San Ysidro port of entry and documented how U.S. border officials are actively discouraging asylum seekers from entering the U.S.

3) Saudi Arabia and Yemen – Congress Must Halt Weapons Sales to the Saudi Arabia and U.A.E. Coalition. On February 5 Amnesty International USA called on the House Foreign Affairs Committee to address the ongoing war and humanitarian catastrophe in Yemen. The human rights situation in the Arabian Peninsula continues to deteriorate amidst continued crackdowns on freedom of expression and freedom of assembly, the arbitrary arrest and detention of human rights activists, the institutionalized inequality of women, and the ongoing conflict in Yemen. Congress must pass The Saudi Arabia Accountability and Yemen Act of 2018 and halt any future weapons sales to Saudi Arabia and the United Arab Emirates (U.A.E.). In addition, Congress must pass the bipartisan Yemen Refueling Act to stop the U.S. from providing in-flight refueling of Saudi aircraft conducting bombing missions in Yemen.

4) Nigeria – Congress Must Halt Funding for Security Forces That Fired on Unarmed Demonstrators. On January 17 Amnesty International USA urged Congress to press the State Department to apply the Leahy Law to Nigerian security forces. On October 30 Nigerian security forces open fired on unarmed demonstrators and killed 23 people. The Nigerian military then refuted the number of fatalities and attempted to justify the use of force. Congress must implement the Leahy Law to prohibit any funding from being used for training or equipment of security forces that have committed human rights violations. Congress must ensure that no U.S. assistance directly supports such a gross violation of human rights.

5) Guantanamo Bay – Amnesty International Calls on Congress to End Indefinite Detention Without Justice. On January 11 Amnesty International and the Congressional Progressive Caucus hosted a panel discussion on the 17th anniversary of the opening of the U.S. detention center at the Guantánamo Bay military base. The panel featured former Guantánamo detainee Mohamedou Slahi who spoke about his treatment and experience as a detainee at Guantánamo. Congress must 1) hold hearings on the status of Guantánamo and why no detainees cleared for release have been transferred since President Trump took office; 2) lift current restrictions on transferring Guantánamo detainees to the U.S., even for trial or medical treatment; and 3) refuse to fund expansion of the prison. 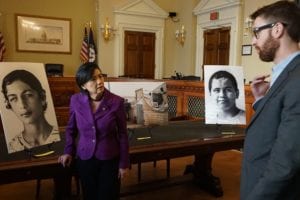 Above: On January 28 Representative Judy Chu (CA-27) spoke with Ryan Mace, Amnesty International USA Grassroots and Refugee Specialist, about the two-year anniversary of the Muslim Ban.

7) Amnesty International Legislative Coordinators Urge Congress to Protect Asylum Seekers at the Southern Border and Halt Arms Sales to Saudi Arabia and the U.A.E. On January 28 Amnesty International Legislative Coordinators met with several dozen Members of Congress. They urged Congress to oppose the Trump policies that block asylum seekers from accessing humanitarian protection at the U.S.-Mexico border. They also lobbied Congress to end U.S. support of the Saudi Arabia and U.A.E.-coalition’s intervention in Yemen.

Above: On January 28 Amnesty International Legislative Coordinators came to Capitol Hill to call for protection of asylum seekers at the southern border and to end arms sales to Saudi Arabia and the U.A.E.