1) U.S. Government Must Stop Turning Back Asylum Seekers and Forcing Them to Wait in Mexico

1) U.S. Government Must Stop Turning Back Asylum Seekers and Forcing Them to Wait in Mexico.  Since October 2018 Amnesty International has been documenting the caravan of asylum seekers and migrants as it has moved from Central America through Mexico to the U.S. southern border. On November 26 Amnesty International released a report based on findings from a research mission to Tijuana, Mexico and the San Ysidro port of entry. The report details interviews with asylum seekers who have been illegally turned away by U.S. Homeland Security Customs and Border Protection officials and are consequently being forced to wait for over a month in very dangerous conditions in Mexico. On November 25 dozens of people who tried to cross into the U.S. were met with tear gas by border agents.

Remain in Mexico: Conditions will only worsen under a potential bilateral deal between the U.S. and Mexico that would force asylum seekers to wait in Mexico for untold periods of time, rather than enter the U.S., while their protection claims are processed. Amnesty International has issued recommendations to the U.S. and Mexican governments to ensure human rights protections and humanitarian support for all those seeking asylum, including calling on authorities to respect international standards on the use of force.  Amnesty International delivered a letter to Mexico’s new president López Obrador setting forth actions the Mexico government should take in his first 100 days, including protecting refugees and asylum seekers in Mexico.

Tornillo Tent City: In late October 2018 Amnesty International USA sent a research team of five to the Tornillo tent city in the remote Texas desert outside El Paso. Tornillo sprung up in June virtually overnight and was initially intended to be an emergency 30-day shelter for a few hundred unaccompanied teens. Tornillo has since mushroomed into a vast tent city detaining over 2,300 unaccompanied teens, many who have relatives in the U.S. ready to take them in. On November 27 the AP and Inspector General of Health and Human Services reported that the Trump administration has been waiving FBI fingerprint background checks on over 2,100 Tornillo staff, thereby jeopardizing the safety of thousands of unaccompanied teens. At Tornillo the administration has approved staffing ratios of one clinician for every 100 children in migrant shelters, in sharp contrast to the federal requirement of one clinician for every 12 children, making it impossible to provide adequate mental health care. Congressional committees overseeing the Department of Health and Human Services must hold oversight hearings and require the testimony of the Office of Refugee Resettlement director who approved the Tornillo contract. Furthermore, the administration must close down Tornillo. Children should never be jailed, whether alone or with their families. This violates international law, increases child trauma, and poses serious mental health risks. The administration should focus on placing unaccompanied children with qualifying U.S. relatives and providing a fair asylum process, which includes appointed counsel in immigration proceedings. 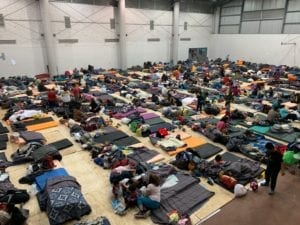 Above: On November 27 asylum seekers were stuck in Tijuana, Mexico.

2) Rwanda – Congress Must Ensure Security Assistance Is Not Linked to Human Rights Abuses.  At a December 4 Lantos Human Rights Commission briefing Africa Advocacy Director Adotei Akwei testified on the horrific state of human rights in Rwanda. He profiled the case of Diane Rwigara, who was detained on baseless charges after forming the People Salvation Movement, an activist group critical of the Rwandan government.  Ms. Rwigara’s case is emblematic of the larger context of fear and repression by Rwandan authorities including arbitrary killings, politically-motivated disappearances, torture and life-threatening prison conditions. Congress must review U.S. security assistance to Rwanda to ensure it is not linked to these human rights abuses. 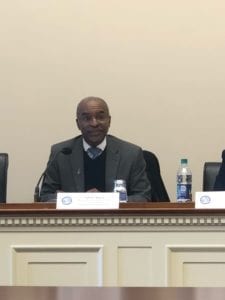 Above: On December 4 Africa Advocacy Director Adotei Akwei testified on the human rights abuses in Rwanda. 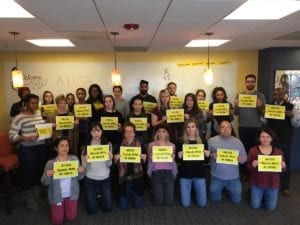 4) Asia – Amnesty International Urges Vice President Pence to Press for Arms Embargo Against Myanmar Military Officials and the Release of Human Rights Defenders Throughout Asia. In a November 12 letter Amnesty International called on Vice President Pence to address human rights concerns during his trip to the East Asia Summit, including 1) Myanmar military’s ethnic cleansing campaign which has resulted in the expulsion of more than 700,000 Rohingya since September 2017; 2) escalating detention and imprisonment of Human Rights Defenders (HRDs); and 3) ongoing human rights violations and abuses in North Korea, China, Vietnam and Cambodia. Specifically, the U.S. government, in tandem with the international community, must impose a comprehensive arms embargo and targeted financial sanctions against senior Myanmar military officials responsible for the crimes against humanity. Additionally, criminal prosecutions against HRDs Wa Lone and Kyaw Soe Oo in Myanmar, Senator Leila de Lima in the Philippines, and Pavitri Manhji in India must be immediately and unconditionally dropped in accordance with international human rights law.

5) Nicaragua – Bianca Jagger Calls on Congress to Press Nicaragua to Halt Repressive Tactics Against Protestors. On November 26 Bianca Jagger, a member of Amnesty International USA’s Leadership Council, came to Capitol Hill to discuss the repressive human rights situation in Nicaragua. Since April 2018 Nicaraguan authorities have used excessive force, extrajudicial executions, and armed groups to crush protests, killing 81 in the process. In May 2018 an Amnesty International delegation traveled to Nicaragua to interview dozens of citizens and concluded that police and pro-government armed groups committed multiple extrajudicial executions. Amnesty International calls on Nicaragua’s president Ortega to end the violent repression of demonstrators and intimidation of victims’ families. Nicaraguan authorities must establish an international commission of independent experts to investigate these extrajudicial executions and other human rights violations. 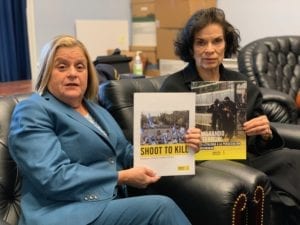 Above: Rep. Ros-Lehtinen (R-FL) and Bianca Jagger display Amnesty International reports that document Nicaraguan authorities’ use of excessive force on its citizens.

6) Refugees – Amnesty International USA Staff Document Conditions of Refugee Camps in the Middle East and Sub-Saharan Africa. In November three Amnesty International USA staff traveled to Lebanon and Jordan to interview over 40 refugees. They documented how drastic changes in U.S. refugee policy including cuts to refugee admissions and humanitarian assistance have dealt a devastating blow to refugees stuck in these camps.

Amnesty International USA’s Africa Advocacy Director traveled to Kenya to the Kakuma refugee camp and Kalobeyei settlement, which hosts over 185,000 people from South Sudan, Sudan, DRC, Burundi DRC and Somalia. The Kakuma refugee camp depends on funding from the U.S. and international community to protect over 483,000 refugees in Kenya and 1.4 million refugees in Uganda. Congress must pass a robust International Affairs budget for FY 2019 to support expanded livelihood and protection programs in Africa and the Mid East so that refugees can rebuild their lives and become productive participants in their local communities.

8) Philippe Nassif Joins Amnesty International USA as Mid East Advocacy Director.  Philippe most recently served as Executive Director of In Defense of Christians for the Middle East.  He previously worked at CARE and the Obama White House.  Philippe speaks fluent Arabic and Spanish. 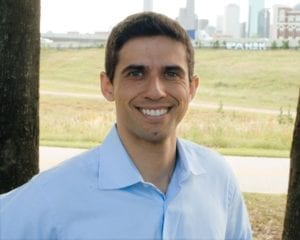