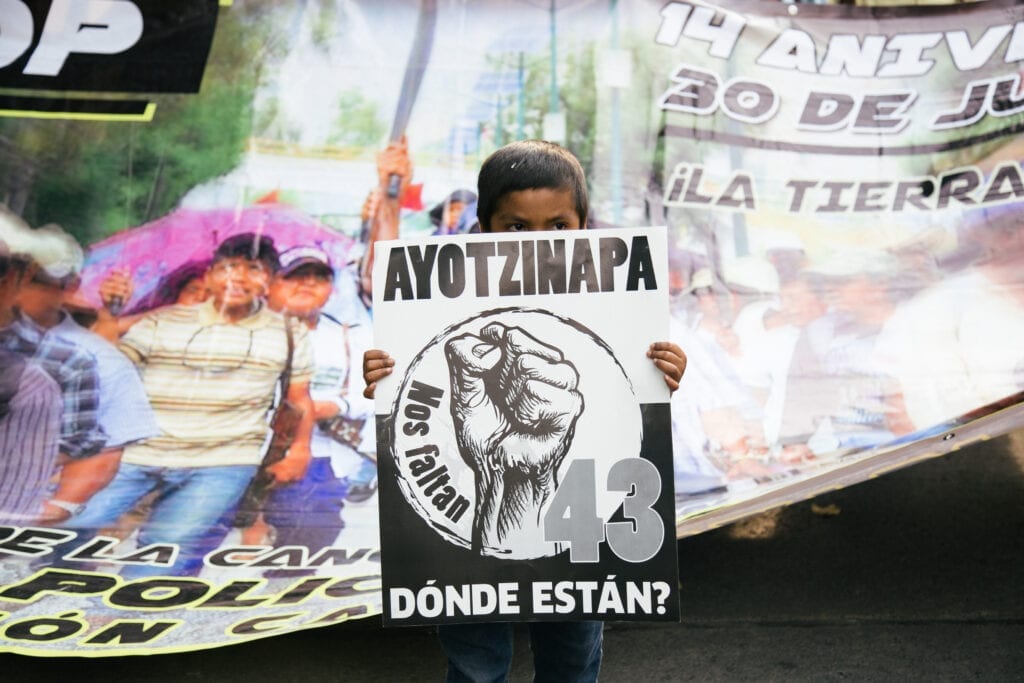 Dear Chairman McGovern, Chairman Smith, and Members of the Commission:

On behalf of Amnesty International and our millions of members and supporters worldwide, we submit the following statement on enforced disappearances in Latin America and around the world.

Enforced disappearances occur when state officials or someone acting with state consent grab someone from their home or the street and then deny all knowledge of their fate or refuse to say where they are. Sometimes enforced disappearances are committed by armed opposition groups. In every case, it is a crime under international law.

The International Convention on the Protection of All Persons from Enforced Disappearance (“Convention”) came into force in 2010. The Convention seeks to prevent disappearances, find the truth when they do occur, and provide survivors and victims’ families with justice and compensation. It is shameful that the United States is only one of five countries worldwide that is not a party to the Convention.

Enforced disappearances are used to spread terror in society, often during periods of armed conflict or repression. Once largely used by military dictatorships, they now occur in every region of the world and in a wide variety of contexts.

Each year, the world observes on August 30 the International Day of the Victims of Enforced Disappearances. Enforced disappearances violate a number of human rights including:

These figures should be treated with caution, given that they do not indicate how many of those people are presumed to be victims of disappearances by non-state actors, how many are thought to be victims of enforced disappearance and how many left of their own accord. On the other hand, most crimes are not reported in Mexico, meaning it is difficult to gauge the real scale of the problem, and the official figure may underestimate the gravity of the situation. Nevertheless, a list of thousands of potential victims should trigger a serious response from the authorities.

September 26 marked the six-year anniversary of the enforced disappearance of 43 students from the Ayotzinapa Rural Teachers’ College. During the first four years following the incident, Amnesty International continually denounced the cover-up by the authorities in the Ayotzinapa case. In the past year, we have seen encouraging efforts by the Mexican government to resolve the case, although much remains to be done. Mexican authorities still owe the victims, their families, and society in terms of guaranteeing their rights to the truth, justice and reparation for the harm done.

In a 2016 report on enforced disappearances in Mexico, Amnesty International found that searches for victims of disappearance are flawed and delayed. Whether a case of disappearance is high profile or remains in obscurity, Mexican authorities seem equally unable to give a coherent response at the institutional level aimed at discovering the truth and ensuring justice. The Mexican state must fulfil its obligation to undertake a thorough search for the disappeared, carry out an investigation, bring those responsible to justice and ensure comprehensive and appropriate reparations for the victims of these grave human rights violations. It should also develop a public policy to prevent disappearances.

In Mexico, “disappearance” often turns out to be femicide. Femicide is the killing of women because they are women. Since the early 1990s, hundreds of women have disappeared or been killed each year. The Mexican National Database of Missing or Disappeared Persons reports that between 2014 and 2018, the fate or whereabouts of 8,987 women was unknown. This figure probably represents a significant underestimate, since most crimes are never reported. In addition, many of these cases are recorded as other types of crimes, such as kidnapping or human trafficking. The bodies of those who are later found dead often show signs of sexual assault or other torture.

A culture of machismo, economic inequality, misogyny, and impunity from justice enable and perpetuate violence against women. When girls, adolescents or women have disappeared, police officers often assume the victim is “with her boyfriend” or that there is a domestic dispute. Failure to take reports of the disappearance of women and girls seriously results in delayed investigations or outright dismissal of complaints.

Because of lack of trust in the criminal justice system, women, especially the mothers of the victims, have organized efforts to search for their missing loved ones and voice their demands for government action to end impunity for the disappearances and femicides of women and girls. They have formed support groups, investigated disappearances, and demonstrated in the streets. On March 8, 2020, women and girls “disappeared” by staging a mass strike and staying home from their schools, work and other daily activities. Pink crosses marking the locations where the bodies of victims were found have become a symbol of justice for disappeared or murdered women and girls across the country.

Testimonies suggest that the five young men were victims of enforced disappearance, allegedly at the hands of agents of the Honduran state security forces. If confirmed, this crime under international law would mark another atrocious chapter in the country’s recent history.

The Honduran government must take urgent measures to find the five missing people alive. The authorities must also carry out a swift, exhaustive, independent and impartial investigation to identify and punish all those responsible for planning and carrying out this crime.

Venezuela:  Amnesty International has documented and condemned the governments policy of repression to silence dissent and exert control over the population of Venezuela, including through enforced disappearances.

Rafael Acosta Arévalo, a retired captain in the Venezuelan Navy, was disappeared in the town of Guatire in the state of Miranda on June 21, 2019. Five days later, the Venezuelan authorities announced that he had been detained. Two days later, after he had been missing for seven days, he was taken before a military court in Caracas. His appearance in court was so that the military judge could verify, among other things, his physical integrity and determine whether his detention had been carried out in accordance with his human rights.

Evidence verified by Amnesty International indicates that on June 28, 2019, Acosta Arévalo was transferred from an unknown place to the Military Criminal Judicial Circuit court building at Fort Tiuna in Caracas, where he lost consciousness and died despite being immediately transferred to the Vicente Salias Military Hospital within the same complex. His death in custody was investigated, and an ordinary court convicted two Venezuelan officials of involuntary homicide but did not investigate the possibility of torture. In a report released last month, Amnesty International concluded that impunity persists for the arbitrary detention, enforced disappearance, torture, and death of Rafael Acosta Arévalo.

China:  Hundreds of thousands of Uyghurs and members of other predominantly Muslim minorities have disappeared in the last three years. Without prior notice or notification to their families, the disappeared are taken to “vocational and educational training centers” located throughout the Xinjiang region, where they are subjected to constant ideological indoctrination and so-called “patriotic education” designed to erase their cultural and religious identity. These facilities are in effect massive internment camps. Some Uyghurs living overseas are forced to turn in their passports to Chinese diplomatic authorities, return to China, and immediately enter into the re-education centers.

Sri Lanka:  Sri Lanka has one of the world’s highest number of enforced disappearances, with estimates ranging from 60,000 to 100,000 arising in connection with internal armed conflicts since the late 1980s. One emblematic case is the disappeared journalist and cartoonist Prageeth Eknaligoda. He went missing after leaving work on January 24, 2010. Two days earlier, he had published an article critical of then President Mahinda Rajapaksa. After nearly ten years of no progress on his case, the government finally indicted nine military intelligence members in November 2019 for his abduction and killing. The trial finally began last month. Amnesty International is monitoring the trial closely to see whether truth and justice will finally be provided to his relatives.

Pakistan:  Enforced disappearances have long been a stain on Pakistan‘s human rights record, and thousands of people have been victims of disappearance over the years. Those targeted include, among others, human rights defenders, political activists, people from Sindhi, Baloch and Pashtun ethnicities, the Shia community, and proscribed religious and political organizations.

July 30, 2020 marked 15 years since Masood Janjua, a businessman from Rawalpindi, and Faisal Faraz, an engineer from Lahore, disappeared as they journeyed by bus to Peshawar in 2005. Amnesty activists have joined Masood’s wife, Amina Janjua (Founder and Chairperson of Defence of Human Rights Pakistan), to raise awareness of enforced disappearances in Pakistan and to pressure authorities for information on the fate of Masood, Faisal, and other disappeared individuals.

Turkey: At least six dismissed civil servants were reported missing in 2019 before being registered in police custody months later. One of these people is Gökhan Türkmen, who went missing on February 7, 2019. Authorities refused to respond to his family’s repeated inquiries about Gökhan’s whereabouts. After nine months of silence, Gökhan finally resurfaced in police custody in November 2019. Upon briefly visiting him, Gökhan’s wife reported he had lost an extreme amount of weight and was very pale. In February 2020, at the first hearing in his trial, Gökhan recounted his abduction by three men who presented themselves as police officers, and his 271 days of enforced disappearance during which he was deprived of food and water as well as of sleep and subjected to other ill-treatment. He remains in pre-trial detention. The authorities announced in July 2019 that four other men, who had also disappeared in February 2019, were being held in police custody. Turkish authorities have yet to effectively investigate any of these reported enforced disappearances.

Conclusions:  Enforced disappearance is frequently used as a strategy to spread terror within society. The feeling of insecurity and fear it generates is not limited to the close relatives of the disappeared, but also affects communities and society as a whole. Family and friends of people who have disappeared experience slow mental anguish. Not knowing whether their son or daughter, mother or father is still alive. Not knowing where they are being held, or how they are being treated. Searching for the truth may put the whole family in great danger. Not knowing if their loved one will ever return often leaves their relatives living in limbo.

Disappearances happen in every region in the world and in a wide range of contexts. They are commonly carried out in internal conflicts, particularly by governments trying to repress political opponents or by armed opposition groups. This is a global human rights issue that demands the attention of all government. Congress must ensure the United States does its part to stop the devastating practice of enforced disappearances in Latin America and around the world.