Statement for the Congressional Record – Senate Hearing on “U.S. Policy in Yemen” 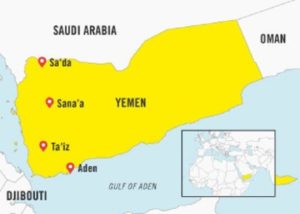 This statement was submitted by Amnesty International USA to the Senate Foreign Relations Hearing on Yemen on April 17, 2017.

On behalf of Amnesty International USA and our 2 million members and supporters nationwide, I’m writing to submit this statement for the congressional record.

Over the last three years, Amnesty International has documented 36 airstrikes by the Saudi-led Coalition that appear to have violated international humanitarian law, many of which may amount to war crimes. Amnesty International has confirmed that U.S.-made munitions, manufactured by Raytheon and Lockheed Martin, were used in two recent Saudi airstrikes in which civilians were killed, one in August 2017 and another in January 2018. These two strikes killed 19 civilians, nine of whom were children. Despite this, the US government has announced new arms sales to Saudi Arabia. Since the start of the war the U.S. government has sold Saudi Arabia, the UAE and other members of the Saudi-led Coalition billions of dollars in weapons, and plans to sell billions more. Last year, Saudi Arabia announced $110 billion in new U.S. weapons deals. In March the White House announced it was finalizing over $12 billion of those deals, and the first deal, worth $670 million, was signed by the US Department of State right after.

The strikes that Amnesty International has documented may not only be in violation of International Humanitarian Law, but also U.S. law. The Arms Export Control Act (AECA) sets restrictions which dictate how military transfers are to be used.  These restrictions only allow for arms transfers which are used for purposes such as furthering internal security and self-defense.

U.S. arms sales to the members of the Saudi-led Coalition might also in violation of Presidential Policy Directive 27 (PPD-27), which directs the US government to exercise unilateral restraint in exporting arms when the transfer of weapons leads to indiscriminate use.

The Senate can and should play an instrumental role in voting on any future weapon deals with the Saudi-led Coalition, and block any deals if you suspect that such weapons would be used to violate international humanitarian law and US law.