After a series of brutal crackdowns in India in the summer of 2018, nine prominent human rights activists remain imprisoned. Many of these activists were specifically targeted because of their work on behalf of some of India’s most vulnerable populations, including the Adivasis and Dalits.  The arrests were conducted under the justification of a draconian counter-terrorism law—the Unlawful Activities (Prevention) Act (UAPA)—that is often used to silence government critics. The UAPA violates several international human rights standards and circumvents fair trial guarantees available under Indian criminal law.  Ironically, these crackdowns came in the same year as India’s election to the United Nations Human Rights Council, where it has an obligation to “uphold the highest standards in the promotion and protection of human rights”.

This month, June 2019, marks a year since the first arrests. While the nine fight to prove their innocence in the courts, they are being attacked, vilified, demonized and harassed by the state, indicating that the continued detention of these human rights defenders is a thinly-veiled attempt to discourage peaceful dissent in the country. Despite this injustice, the issue of the continued incarceration of the brave activists seems to have disappeared from discourse. It is of urgent importanc 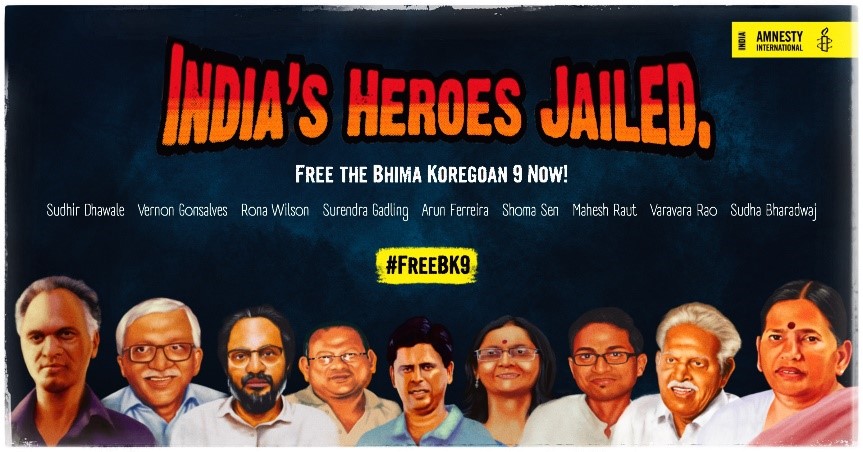 e to revive the conversation and take up this issue with the Modi government.

About the Detainees
SUDHA BHARADWAJ: Sudha Bharadwaj is a lawyer, trade unionist and a civil rights activist. She served as the General Secretary of the Chhattisgarh People’s Union for Civil Liberties (PUCL) and Vice President of the Indian Association for People’s Lawyers. As a human rights lawyer, she has represented victims of fake encounters- or staged gun fights and police standoffs to cover up extra-judicial killings- and other human rights defenders before the Chhattisgarh High Court and National Human Rights Commission (NHRC). In March 2019, Sudha was honoured by Harvard Law School for “astounding contributions of women around the world to the areas of law and policy”.

ARUN FERREIRA: Arun Ferreira is an activist based in Mumbai. He has been assisting marginalized communities to organize themselves against injustices they face since his college years in the 90s. In 2007, Arun was arrested after claims surfaced that he was in charge of the Propaganda and Communications wing of the banned Communist Party of India (Maoist), but was acquitted 7 years later.

SURENDRA GADLING: Surendra Gadling is a human rights lawyer and Dalit rights. Before his arrest, Surendra took up cases of fake police encounters and other abuses committed against Dalits and Adivasis. He served as a Special Public Prosecutor in dowry-related cases and is also one of the leading lawyers in the case related to the Khairlanji agitation – a protest movement launched after the gruesome caste-murders of a Dalit family in Maharashtra. Surendra also represented Arun Ferreira in court from 2007 to 2012 and was key in securing Arun Ferreira’s acquittal on all charges.

MAHESH RAUT: Mahesh Raut is an activist who worked with Adivasis. He studied at the Tata Institute for Social Sciences, Mumbai and worked as a Prime Minister Rural Development Fellow in Gadchiroli. Mahesh is a co-convener of the Visthapan Virodhi Jan Vilas Andolan, which fights against the displacement of marginalized communities. He has campaigned against mining projects which threaten to displace the Adivasi communities and the local ecology.

SHOMA SEN: Prior to her arrest, Shoma Sen was an assistant professor and the head of the Nagpur University. Shoma is a member of the Committee for the Protection of Democratic Rights and has been a long-time Dalit and women’s rights activist. She was part of many fact-finding commissions that looked into the abuses committed by security forces in Manipur and allegations of sexual violence against Adivasis in Chhattisgarh.

RONA WILSON: Rona Wilson works with the Committee for Release of Political Prisoners and has consistently campaigned for the release of political prisoners in India who were arrested under UAPA and other repressive laws.

SUDHIR DHAWALE: Sudhir Dhawale is an activist, actor and publisher of the bi-monthly Marathi magazine Vidrohi, which focuses on issues relating to labor, land, education, health and caste. In 2011, Sudhir was arrested by the Maharashtra Police under the UAPA for “conspiring and waging war against the Government of India”. After more than three years, the courts released Sudhir because the police could not produce any substantial evidence against him.

VERNON GONSALVES: Sixty-year old Vernon Gonsalves is a Mumbai-based activist who has worked for the rights of laborers. In 2013, he was convicted under the Arms Act and the UAPA, but later was released.

VARAVARA RAO: Varavara Rao, 78, is a poet and civil rights activist based in Telangana who founded the Revolutionary Writers’ Association. Rao has been arrested several times in the past, including for conspiring to overthrow the Andhra Pradesh Government. However, he was acquitted of all charges in all cases.

Amnesty’s Recommendations
Amnesty has three primary recommendations for the Indian government in light of these detentions:

Amnesty calls for greater legislative changes in India that bring the country in line with international human rights standards. Some of these repressive laws which require the most scrutiny include, but are not limited to, the National Security Act and the Unlawful Activities (Prevention) Act. Further, provisions in the Indian Penal Code that are being misused to broadly criminalize activism under the guise of sedition and defamation must be repealed.  If the detained human rights defenders do not receive a fair trial, and repressive laws that allowed for their initial detention are not repealed, India’s government will be in violation of the very human rights standards its representatives claim to uphold. It is of the utmost importance that India’s authorities act in accordance with their stated priorities and protect the rights of its people.