At Amnesty International, we strongly believe in the power of a letter. Our story began in 1961, when British lawyer Peter Benenson read a newspaper story about two Portuguese students who were jailed for raising their glasses in a toast to freedom. He urged reader to write letters on behalf of the detained and thousands heeded his call.

During our largest annual human rights campaign, people around the world write letters on behalf of people who need urgent help. As part of our “Write for Rights Campaign,” Amnesty International USA’s advocacy director, Daniel Balson, wrote a letter to Ukraine’s Minister of Internal Affairs, Arsen Avakov concerning the case of Vitalina Koval. In Ukraine, groups promoting hatred and extremism routinely endanger the safety and lives of activists simply participating in feminist or LGBTI-related events. Vitalina stepped out on International Women’s Day 2018 to attend a peaceful protest. But she was met with violence, and came home with chemical burns to her eyes. Her story is part of an ugly pattern.

While these attackers frequently share their intentions and brag about their violence on social media, they rarely suffer consequences. In the letter, Amnesty International USA calls attention to this cycle of impunity and commits to raising it with policy makers in Washington. We will continue urging our leaders to hold the Government of Ukraine to account and we hope you will join us.

You can download a copy of the letter here: Amnesty_AvakovLetter_FINAL_2018_10_08 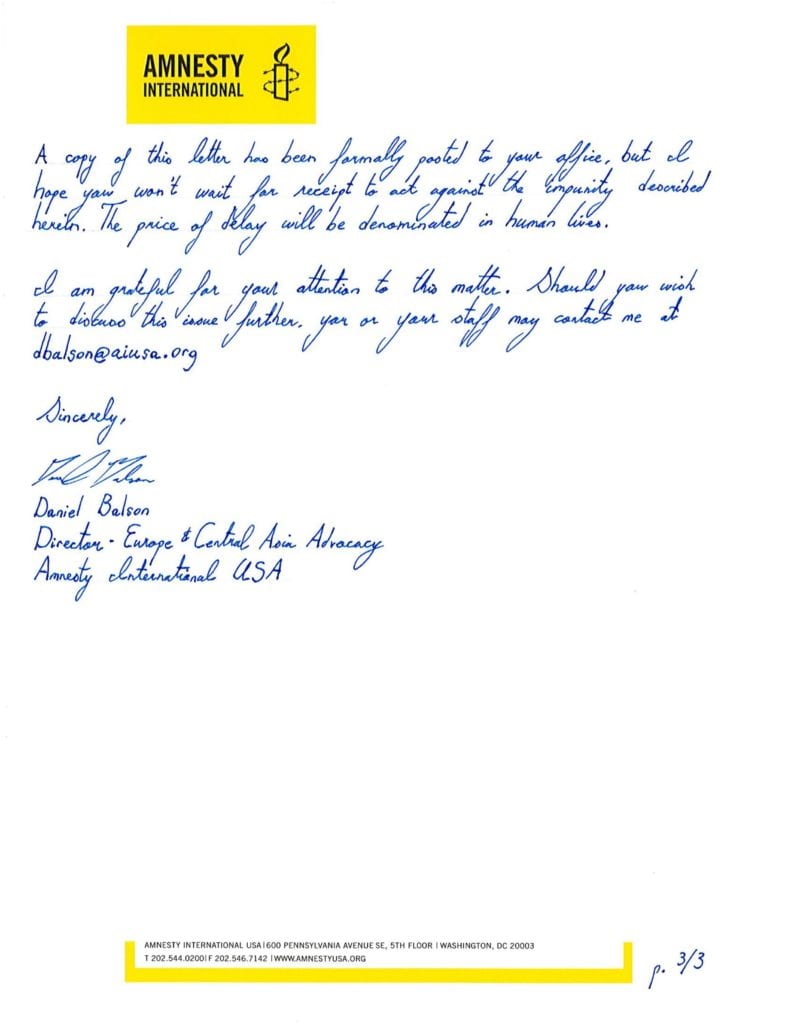 I am writing you in my capacity as advocacy director for Europe & Central Asia at Amnesty International USA. I wish to urgently raise the case of Vitalina Koval and others like her to your attention. Ms. Koval is a brave LGBTI activist from the city of Uzhgorod.

In March 2018, Vitalina was attacked during a protest held on International Women’s Day. Six people from the radical group “Karpatska Sich” doused her with red paint, causing severe chemical burns to her eyes. Several days later, two activists who protested alongside Vitalina were followed home and attacked by “Karpatska Sich” members.

Vitalina’s case is not exceptional but part of a pattern of impunity for members of groups advocating discrimination and hatred. Since January 2017, my organization has documented over 30 similar attacks. With rare exceptions, Ukrainian authorities failed to hold the perpetrators of these attacks accountable and consider the discriminatory motive of these attacks.

As you are surely aware, Amnesty International has been clear and consistent in condemning human rights abuses perpetrated by the Russian Federation on the sovereign territory of Ukraine. We are proud to stand with brave activists such as Oleh Sentsov. My colleagues and I have repeatedly drawn attention to Crimean Tatar human rights defenders such as Emir Usein-Kuku through our public writings and in conversations in Washington and European capitals. However, as Ukraine legitimately protests the maltreatment of its people by authorities in Crimea and the Donbas region, it must itself live up to the values claims to espouse.

We are calling on you to ensure the attack on Vitalina Koval and all other reported attacks by groups advocating discrimination and hatred are immediately investigated and that their perpetrators are brought to justice. The discriminatory motive of these attacks should be taken into account during the investigations. We are also urging you to acknowledge the problem of growing violence by these groups, and to make necessary changes to the policies and rules regulating police conduct at public assemblies and closed gatherings. In particular, the police should be instructed to effectively protect participants of events and prevent the use of violence. In the interim, I will continue raising these issues at the highest levels in Washington.

A copy of this letter has been formally posted to your office, but I hope you won’t wait for receipt to act against the impunity described herein. The price of delay will be paid in human lives.

I am grateful for your attention to this matter. Should you wish to discuss this issue further, you or your staff may contact me at [email protected].