Amnesty International is built on the idea that people coming together against injustice can be a game-changer! The sum of each of our actions creates a powerful force that has proven to be effective in igniting positive social change. Use this guide to take action this year, and check back frequently for updates and new actions!

HOW TO GET STARTED

HUMAN RIGHTS AND THE 2020 ELECTIONS

The charged atmosphere of a presidential election brings with it unique challenges and opportunities for human rights organizations like Amnesty International. The office of the President of the United States has the capacity for enormous human rights impact, both positive and negative. Amnesty International does not take a position on which candidate should be the next President, but we do believe that the next U.S. President must protect and advance human rights here at home and around the world.

Amnesty International believes that human rights are not a “Democratic thing” or a “Republican thing.” They are universal and binding obligations that we expect any administration to prioritize in its foreign and domestic policy. Over the next 16 months, Amnesty activists can raise the profile of human rights in public discourse, while keeping out of the partisan politics of election campaigns.

The 2020 Elections Toolkit will provide: 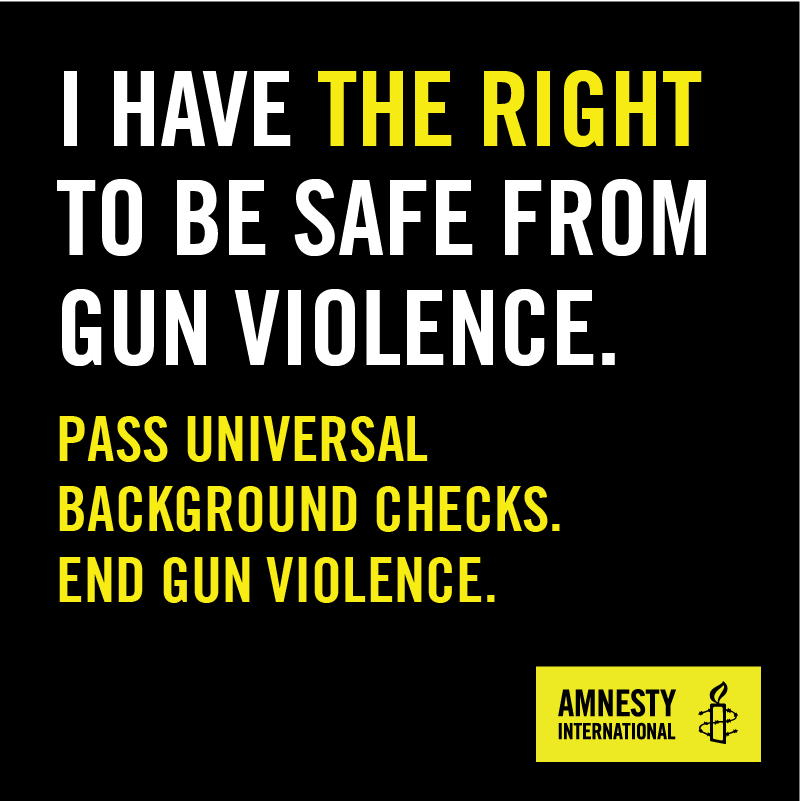 Congress returns on September 9th, and in the wake of the horrific and highly-publicized mass shootings during August, we expect the gun violence prevention debate to be front and center. This presents us with unique opportunities to pass good bills through Congress, but we must be wary: legislators may try to add amendments to otherwise good bills that would stigmatize communities, and we refuse to support progress at the expense of anyone’s human rights.

What you can do

Refugees around the world

Every day, all over the world, people are forced to make the most difficult decision of their lives — they are forced to flee their homeland to escape persecution and torture or other severe human rights abuses, armed conflict, and horrific violence. Many have no option but to seek resettlement in a new country they can call home. But governments around the world aren’t doing enough to help. The Trump administration has implemented a series of discriminatory and restrictive policies, starting with the Muslim ban and followed by successive refugee bans, cuts to refugee admissions, and the implementation of extreme vetting processes. These actions have not only choked refugee resettlement worldwide, but have also had dire consequences for tens of thousands of refugees and left the lives of many hanging in limbo. When intimidated by the state of the world, some build a taller wall; we’re building a longer table.

What you can do

Eighteen years after it was created to detain suspected “terrorists” beyond the reach of the law, the Guantanamo Bay Detention Center remains open and continues to imprison 40 Muslim men indefinitely, without charge or fair trial. One of those men is Toffiq al-Bihani, a 47-year old Yemeni man who has been in U.S. custody since 2002 and never even been charged with a crime. He was tortured by the CIA in Afghanistan and transferred to Guantanamo in 2003, where he has remained ever since. Although he was cleared by the Obama administration to leave the prison in 2010, Toffiq remains imprisoned there still. For the 18th anniversary of the opening of Guantanamo, we are asking members to take online action to Close Guantanamo and transfer Toffiq al-Bihani immediately.

Since President Trump took office, there’s been a dramatic increase in civilian killings from U.S. drone and other air strikes. Although the U.S. claims to investigate civilian deaths and injuries, the government has refused to acknowledge thousands of civilian deaths and injuries from U.S.-led air strikes that Amnesty International has documented. It has likewise refused to assist the survivors. Tell the U.S. government to conduct meaningful investigations of all claims of civilian casualties from U.S. lethal operations, and to provide compensation.

WHAT YOU CAN DO

Join the Urgent Action Network and take action to support individuals at risk, including political prisoners, prisoners of conscience, and human rights defenders. Are you an educator? Learn how to engage your students in human rights by using our Educator’s Guide.

Because you ❤️ human rights