On 27 December 2020, the Jiangsu Provincial People’s High Court rejected Yu Wensheng’s appeal of his four-year prison sentence for “inciting subversion of state power”, passed down after a secret trial in June 2020. After almost three years without access to his family, Yu Wensheng was finally able to take part in a video call with his wife Xu Yan on 14 January 2021. Afterward, Xu expressed grave concerns about the apparent deterioration of Yu’s health. In addition to being unable to use his right arm due to nerve damage, Yu continues to show signs of malnutrition. He is a prisoner of conscience, detained solely for peacefully exercising his right to freedom of expression, and must be immediately and unconditionally released. 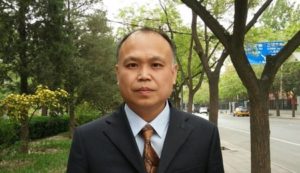 I am writing to express my grave concern for the health of Yu Wensheng (余文生), a human rights lawyer sentenced to four years’ imprisonment and deprivation of political rights for three years on the charge of “inciting subversion of state power” (煽动颠覆国家政权罪) for peacefully expressing his right to freedom of expression. First arrested in 2018, Yu’s health has dramatically deteriorated due to poor conditions and alleged torture and other ill-treatment while in detention.

After three years of no access to his family members, it was promising to learn that Yu Wensheng was finally granted a video call with his wife on 14 January 2021. Unfortunately, the call only lasted 25 minutes, five minutes shorter than the standard visiting period at Xuzhou City Detention Center. During the call, Yu Wensheng’s wife observed that his health had dramatically deteriorated. Three of his teeth had been removed, and his right arm is weak due to nerve damage which makes it impossible for him to write.

Yu Wensheng’s wife also noticed signs of malnutrition. Yu told his lawyer in August 2020 that he was often not given enough food, and it seems that this situation has not improved. I find this incredibly distressing, as Yu Wensheng has already endured three years of poor conditions and ill-treatment in detention. Unless his treatment improves, I fear that his health will only continue to worsen.

I call on you to ensure that Yu Wensheng has access to adequate food, health care and prompt access to medical attention; ensure Yu Wensheng has regular, unrestricted access to a lawyer of his choice and his family and while in detention, he is not subjected to torture or other ill-treatment; and release Yu Wensheng immediately and unconditionally, as he is imprisoned solely for peacefully exercising his human right to freedom of expression.