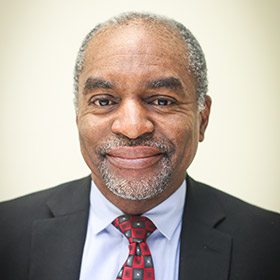 Adotei Akwei is the Deputy Director for Advocacy and Government Relations for Amnesty International USA.  He rejoined AIUSA in September 2010 after serving as the Senior Policy Advisor for CARE USA.

Prior to joining the Government Relations team in Washington DC, he served as the Regional Advocacy Advisor for CARE’s Asia Regional Management Unit. As an RAA, Adotei supported CARE Country Offices in Asia in the development and implementation of national-level advocacy strategies as well as with regional advocacy priorities. Before joining CARE, Adotei worked with Amnesty International USA for 11 years, first as the senior Advocacy Director for Africa and then later as Director of Campaigns.

Adotei is a political analyst, an experienced advocate, and campaigner on civil, political, economic and social rights, US foreign and security policy as well as a rights-based approach to ending poverty with field experience in Africa and Asia. He is a regular spokesperson for AIUSA for print, radio and television news outlets in the United States, Europe and Africa such as the BBC, VOA, SABC, National Public Radio, the Pacifica Radio, CNN, Fox News, New York Times, Washington Post, Los Angeles Times, Christian Science Monitor, Financial Times, Washington Times, West Africa Magazine, Congressional Quarterly. He has also testified numerous times before both the House and the Senate.