In recent years, human rights abuses have increased significantly in Vietnam. The United States can play a powerful role in pushing Vietnamese authorities to address violations and end further abuses. We call on Vice President Harris to focus on human rights violations during her upcoming visit to the country. Read the full letter here: AIUSA Letter on Upcoming Vietnam Trip. 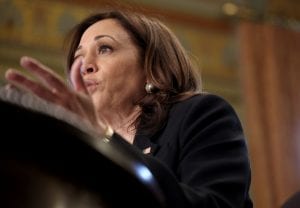 On behalf of Amnesty International and our 10 million members, activists, and supporters worldwide, we welcome the news of your upcoming trip to Vietnam. We urge you to address pressing human rights concerns in your meetings with Vietnamese authorities.

The United States can play a powerful role in pushing Vietnamese authorities to address these violations and end further abuses. We urge you to raise the critical rights issues outlined below on your upcoming trip.

Freedom of Expression: In a December 2020 report, Amnesty International documented the systematic repression and criminalization of peaceful online expression in Vietnam. Tech giants Facebook and Google are increasingly complicit in the Vietnamese authorities’ censorship of internet users, often in violation of international human rights law and standards. Amnesty further documented that groups affiliated with the government deploy sophisticated campaigns on these platforms in an attempt to harass everyday users into silence and fear. AIUSA’s National Advocacy Director Joanne Lin testified about Big Tech’s complicity in censorship in Viet Nam at a December 9, 2020 House Foreign Affairs Subcommittee hearing on International Human Rights and the Closing Civic Space.

In February 2021, an investigation by Amnesty International identified a campaign of spyware attacks targeting Vietnamese human rights defenders. Amnesty attributed these attacks to a group known as Ocean Lotus.

Vietnamese authorities have been actively suppressing online speech amid the COVID-19 pandemic and have brought serious criminal charges against multiple internet users for comments critical of the government. Vietnam is currently jailing more than 170 prisoners of conscience, of whom 69 are behind bars solely for their peaceful social media activity.

Persecution of Human Rights Defenders: As of December 2020, at least 173 known prisoners of conscience were imprisoned in Viet Nam, the highest recorded number since Amnesty International began publishing these figures in 1996. Most were held under either Article 331 of the Criminal Code, which prohibits “abusing democratic freedoms to infringe the interests of the State”, carrying penalties of up to seven years’ imprisonment, or Article 117, which criminalizes “making, storing or spreading information, materials or items for the purpose of opposing the State of the Socialist Republic of Viet Nam” and carries a sentence of up to 20 years’ imprisonment.

In May 2021, land rights activists and human rights defenders Trinh Ba Tu and his mother Can Thi Theu were both sentenced to eight years’ imprisonment followed by three years’ probation after being convicted under Article 117.

In April 2021, human rights defender Nguyen Thuy Hanh was arrested in a blatant politically motivated attempt to silence her advocacy, including her work on behalf of unjustly detained prisoners.

US Trade Representative Investigation and Indigenous People’s’ Rights in Cambodia: Widespread illegal logging in Cambodia is leading to serious violations of Indigenous peoples’ rights and significantly contributing to the climate crisis. The continued trade of illicit timber into Vietnam from Cambodia is an important enabler of these violations.

Improved oversight and due diligence on the import of Cambodian timber by Vietnam would play an important role in protecting Indigenous Peoples’ rights in Cambodia. At present, the US Trade Representative is undertaking a Section 301 investigation into Vietnam’s import and use of illegal timber in its export market.

Thank you for your consideration of those pressing human rights issues. For more information or any questions you may have, please contact Joanne Lin, National Director for Advocacy and Government Affairs or Carolyn Nash, Advocacy Director for Asia. We are available to providing briefings at your convenience.

Thank you for your attention to these important matters.