Since the failed 2016 coup attempt, human rights in Turkey have been under assault. Authorities have ruthlessly suppressed dissent, with journalists, political activists and human rights defenders among those targeted. Governing authorities have widely curtailed freedom of expression and assembly. 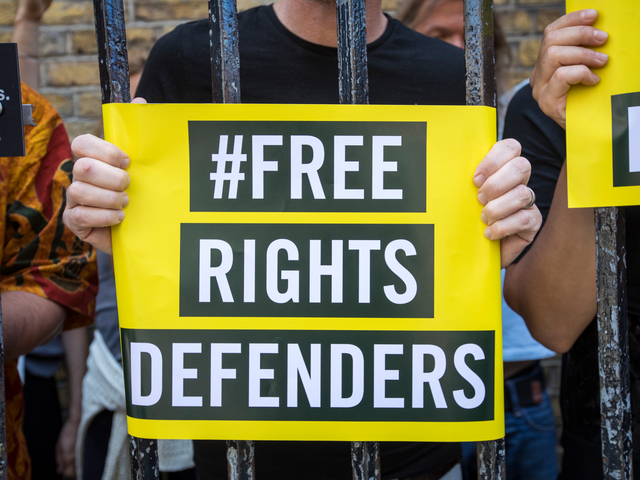 Good afternoon. I’d like to begin by thanking Congressman Jim McGovern and Congressman Randy Hultgren, co-chairs of the Tom Lantos Human Rights Commission. Their efforts, as well as those of all commission members and commission staff, to ensure that human rights are prioritized in Congress offer precious support to those whose rights have been violated and who are too often neglected and forgotten. Thank you.

Since the failed July 2016 coup attempt, the Turkish government has abused the judicial and carceral system to launch a sweeping crackdown on dissident voices. Undeniably, the Turkish people have been the biggest victims of their government’s assault on fundamental freedoms. Turkey is the single biggest jailor of journalists in the world. One third of all imprisoned journalists in the world are held in Turkish prisons. Since July 2016, over 100 journalists and media workers remain in pre-trial detention and over 180 media outlets have been shuttered by the government. Authorities have also shut down 1,300 Turkish NGOs and implemented bureaucratic obstacles to limit their ability to operate. 100,000 public service workers have been arbitrarily dismissed. In almost all cases, they received no explanation for their summary termination and they have no avenue to appeal their dismissal. More than 100,000 people have faced criminal investigations and possible prosecution, and more than 50,000 people have been imprisoned pending trial.

Amnesty International staff and members can personally attest to the ferocity of the crackdown. In June 2017, Turkish police arrested Amnesty International Turkey’s board chair, Taner Kilic and director, Idil Eser, and charged them  with “membership of a terrorist organization”. Idil and Taner were subsequently released. They, and numerous other activists, continue to face baseless charges.

Yet since the failed coup attempt of 2016, Turkish authorities have increasingly exported and internationalized human rights violations. And so, Turkey’s human rights problem has become the world’s human rights problem. Amnesty International and other human rights organizations have documented how Turkey’s security services have beaten peaceful protestors abroad, forced the extradition of critics under flimsy pretext, and muzzled its own citizenry in service of its foreign policy.

Just over one year ago, Turkish security services accompanying President Recep Tayip Erdogan on a visit to the United States attacked human rights protestors in Washington DC. The videos of the altercation were promptly posted to sites like YouTube and carried by numerous major media outlets. They are hard to watch. Peaceful protestors, some of them Americans, are shown being repeatedly kicked and stomped while lying prone on the ground. Protesting men and women are depicted calling for ambulances, sitting stunned on the ground and walking away from the chaos covered in blood. This violence occurred in the nation’s capital under the full glare of the media and represents a microcosm of the kind of abuse that occurs on Turkish soil.

One year earlier, Amnesty International staff and volunteers were threatened by Turkish security when they gathered outside the Brookings Institution in Washington, where President Erdogan was giving a speech. Security personnel insulted protestors and grabbed posters out of their hands before attempting to physically remove a journalist who had been critical of President Erdogan’s policies.

Turkey has made profligate misuse of the Interpol “Red Notice” system to extradite individuals from third countries. This effort is plainly designed to communicate to government critics: you will never find safety. In September 2017, an Interpol “Red Notice” led to the arrest of Dogan Akhanli, a genocide scholar of Turkish origin residing in Spain. After a sustained public outcry, Mr. Akhanli was allowed to return to Germany, where he is a citizen. When Interpol notices prove insufficient, Turkish authorities use informal channels to cajole or coerce foreign governments into arresting and extraditing Turkish nationals. Turkey has pressured Georgian authorities to deport a school teacher and facilitated the rapid arrest and extradition of six Turkish citizens in Kosovo, all on poorly-substantiated charges of supporting terrorism. This month, Amnesty International reported that Moldovan police raided a Turkish high school in Moldova’s capital, Chisinau, and detained and deported seven Turkish nationals back to Turkey. Individuals deported to Turkey risk severe human rights violations. The judiciary’s lack of independence all but ensures they will not receive a fair trial. Torture and ill-treatment, especially in police custody, continue to be reported in Turkey.

The Turkish government has repeatedly violated human rights to enable and entrench its foreign policy prerogatives. The government’s policies in Syria and beyond are fundamentally empowered by its pursuit of civil society and the media. In 2015, security services arrested Can Dündar, one of the country’s most prominent journalists, after his newspaper Cumhuriyet aired footage showing Turkish intelligence sending weapons to Syrian rebels. Earlier this year, Turkish President Erdogan threatened to arrest those who opposed his incursion into Afrin and promptly followed through on the threat.

There are a number of things that Congress can do to address this issue: