Amnesty International called on Senators to pass S. Res. 407, recognizing the work of human rights defenders, and use confirmation hearings to ensure executive nominees priorities human rights in Turkey. Additionally, Amnesty called on the Senate to urge the State Department to raise human rights in all conversations with Turkish officials and attend politically motivated trials. During the briefing, Senator Coons expressed his support for Amnesty International Turkey’s former Board Chair Taner Kılıç, who has been detained by Turkish officials since June 2017. 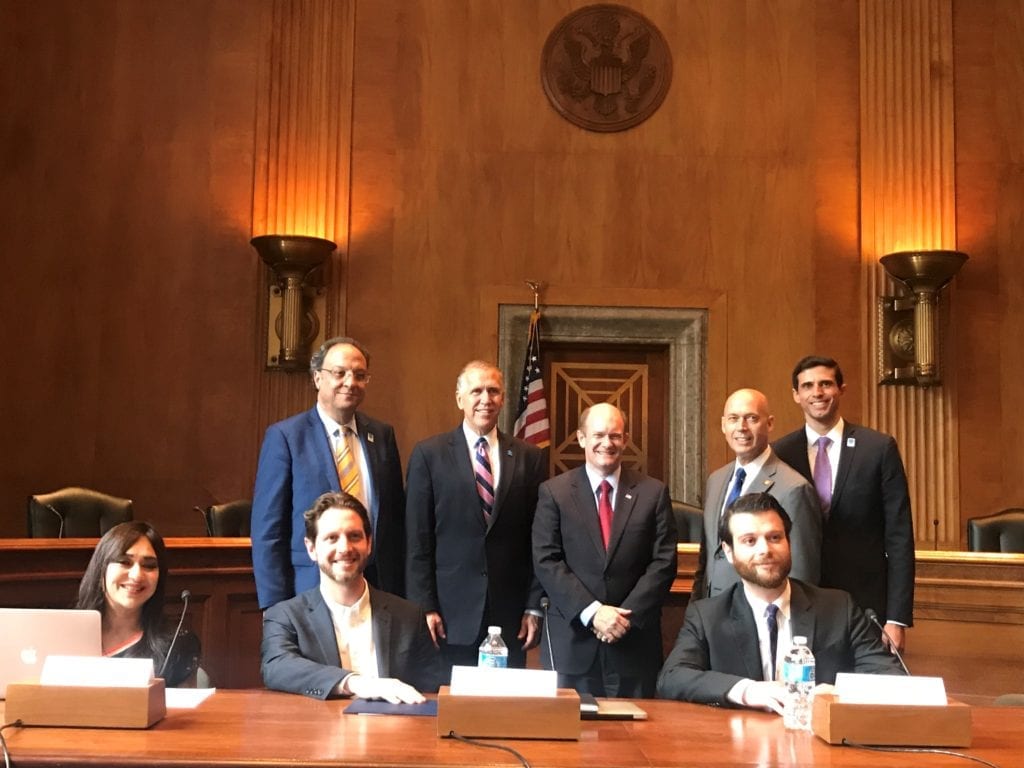 Good Afternoon. I’d first like to thank Senators Coons and Tillis for organizing this important briefing on religious freedom and human rights in Turkey. Under their continued leadership, the Senate Human Rights Caucus has been a critical voice for fundamental freedoms in Turkey and around the world. Amnesty International is sincerely grateful for your work.

On July 15, 2016, a group within the Turkish military attempted to overthrow the government. The failed coup left more than 240 people dead. Since the coup attempt, the Turkish government has abused the judicial and carceral system to launch a sweeping crackdown on dissident voices, including those in the media and civil society. I’ll speak about those two sectors in turn. Taken together, these actions represent a concerted effort to cleanse Turkish political, economic, and social life of independent thought and speech.

There are clear actions that the U.S. Congress and the White House can take today to challenge Turkey’s slide.

The numbers are staggering: Since July 2016, over 100 journalists and media workers remain in pre-trial detention and over 180 media outlets have been permanently shuttered by the government. Thousands more have lost their jobs or been stripped of their press credentials.

Turkish authorities have arrested journalists for any number of activities routine to their profession. Television presenters have been arrested for hosting controversial speakers, reporters for participating in online social media groups, cartoonists for their caricatures, and investigative correspondents for covering protests.

The Turkish government has slurred and stigmatized imprisoned journalists for their work. President Erdogan himself has described journalists as, “thieves, child abusers, and terrorists.”

Kurdish journalists have faced especially brutal repression. Since the coup attempt, almost all Kurdish newspapers, TV and radio stations, and news agencies have been closed by the government. There are credible reports of Kurdish media workers being subjected to torture, death threats, and ill treatment. One journalist, Ömer Çelik, was beaten for hours during his arrest in December 2016. During his subsequent detention, he was dunked in vats of cold water and left outside on a balcony in freezing temperatures. Nedim Türfent, another Kurdish journalist, was informed by police during an interrogation that he could be killed and that his death would be easy to cover up.

In the aftermath of the 2016 coup attempt, hundreds of NGOs have been shut down and hundreds more have faced bureaucratic measures that limit their ability to operate. Some of the targeted NGOs were providing care for the massive numbers of Syrian refugees in the country. The crackdown has had a paralyzing effect on civil society.

The Turkish government has used a “carousel” approach to detentions – arresting, releasing, and rearresting individuals in close succession to create an atmosphere of fear, panic and uncertainty. In June 2017, Turkish police arrested Amnesty International Turkey’s board chair, Taner Kilic, and charged him with “membership of a terrorist organization”. On January 31st, a Turkish court ordered Taner’s release from prison. Just hours later, another court extended his detention and he was immediately remanded to prison.

The Turkish authorities’ crackdown on fundamental freedoms matters to the United States. The government’s policies in Syria and beyond are fundamentally enabled by its pursuit of civil society and the media. Turkish authorities understand that independent voices serve as an important check on the government’s policies. In 2015, security services arrested Can Dündar, one of the country’s most prominent journalists, after his newspaper Cumhuriyet aired footage showing Turkish intelligence sending weapons to Syrian rebels. Earlier this year, Turkish President Erdogan threatened to arrest those who opposed his incursion into Afrin and promptly followed through on the threat.

A breakdown in Turkey’s rule of law impacts not only Turkish civil society, but also foreign embassy staff and foreign citizens, who have been increasingly subjected to arbitrary detention. The Turkish government has arrested multiple U.S. consular employees, alleging links between them and “terrorist organizations”.