Joint Letter: The U.S. Must Comply with the Convention against Torture

In 2021, the United States issued three reports regarding its compliance with the International Covenant on Civil and Political Rights, the International Convention on the Elimination of All Forms of Racial Discrimination, and the Convention against Torture and Other Cruel, Inhuman or Degrading Treatment or Punishment (“CAT”), respectively. The reports assert that “the United States is committed to performing its obligations” under the treaties, but then fail to even mention exploring new interagency mechanisms to promote U.S. accountability. The reports also fail to report accurately on policies and practices that do not comply with CAT, or otherwise contradict the reports’ assertions. 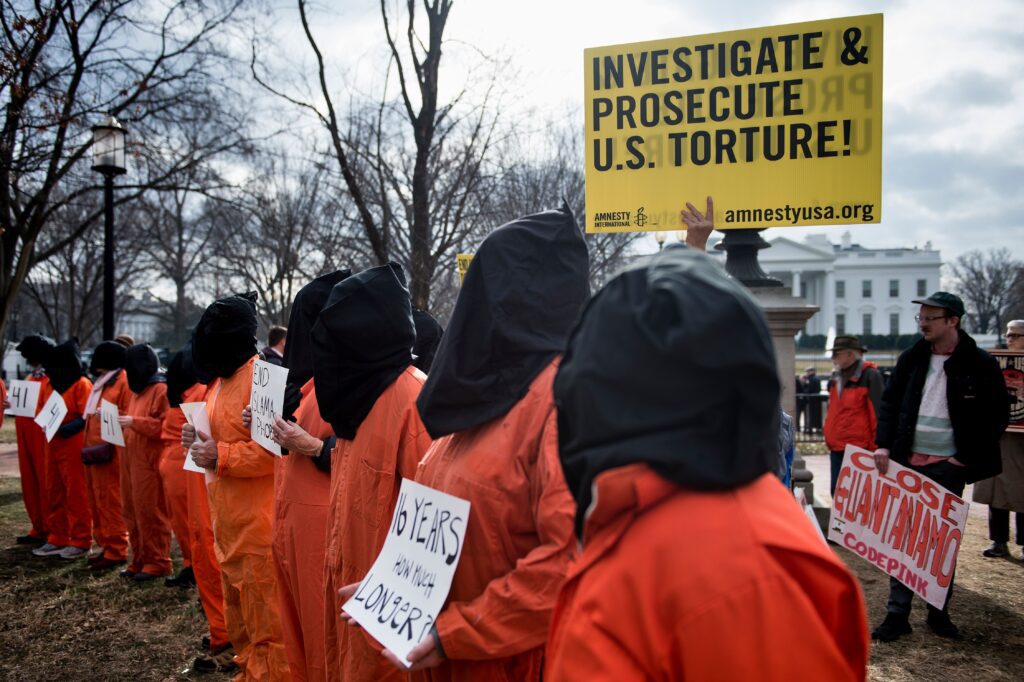 United States Mission to the UN

Assistant to the President for Domestic Policy and Director

President Biden recently said “leading by example means taking action at home.” We agree. As many world leaders gather on December 9 and 10 for the Summit for Democracy — which overlaps with International Human Rights Day, and where advancing human rights is one of three key objectives —  the President should demonstrate that US actions reflect its commitments.

In 2021, the United States issued three reports regarding its compliance with the International Covenant on Civil and Political Rights, the International Convention on the Elimination of All Forms of Racial Discrimination, and the Convention against Torture and Other Cruel, Inhuman or Degrading Treatment or Punishment (“CAT”), respectively. The reports assert that “the United States is committed to performing its obligations” under the treaties, but then fail to even mention exploring new interagency mechanisms to promote US accountability. The reports also fail to report accurately on policies and practices that do not comply with CAT, or otherwise contradict the reports’ assertions. In this letter, we draw your attention to three such problems with the United States’ report on its compliance with CAT (the “report”).

First, the report obscures United States border policies that violate CAT on a daily basis. While such violations have occurred for some time, they worsened after adoption of the family separation policy in April 2018, the Migrant Protection Protocols (MPP) in 2019, and the unnecessary and illegal expulsion policy under Title 42 in March 2020. The report asserts that migrants arriving at US borders are being screened by asylum officers under either the credible or reasonable fear standard to ensure that they are not returned to a country where they would be in danger of torture. The report elides the fact that the Title 42 and MPP programs turn people seeking protection back to places where they are, as US officials know, targets of torture, kidnappings and brutal attacks. Not only do Customs and Border Protection (CBP) officials administering Title 42 and the MPP program repeatedly and systematically failed to refer migrants for such screenings, but  “screenings” that fall short of the Refugee Convention and CAT standards – even if they do occur — do not constitute an adequate safeguard, especially given the systematic targeting of asylum seekers and migrants subjected to these policies.

That these policies and CBP’s failure to provide these referrals, violate US nonrefoulement obligations under CAT is tragically borne out by those cases in which Mexican officials appear to have been directly implicated in the torture of individuals returned to Mexico under MPP. In other cases, nonstate actors have committed abuses of comparable severity. Mexican officers—including local, state, and federal police and immigration officials—are involved in, complicit in, or turn a blind eye to the violence, torture and kidnappings carried out by the deadly cartels that control vast stretches of territory in Mexico.

The Committee against Torture, which provides authoritative interpretation of the CAT, is clear that the duty not to return applies “equally” in cases where a government “is unable to prevent” acts of severe abuse committed by nonstate actors. Moreover, Haitians, Nicaraguans, Mexicans, and other asylum seekers expelled by the United States to their home countries under Title 42 have consistently reported that they have been denied the opportunity to raise their fears of persecution or torture prior to their return. There is overwhelming evidence that the United States is failing to provide even the unduly restrictive so-called “shout test” to migrants under Title 42 (i.e., a chance for a referral if a migrant makes a “spontaneous and reasonably believable claim” that they fear being tortured). As of November 2021, only 3,217 migrants were referred for screening out of 1,163,000 border expulsions under Title 42 since March 2020; and of these, only 272 passed their initial screening interviews.

The impact has been particularly cruel to Haitians, some 8,500 of whom have been forcibly removed to Haiti since late September, the vast majority under Title 42. Former US Special Envoy Daniel Foote has called Haiti a highly dangerous “collapsed state” that may have the highest kidnapping rate in the world. Former US State Department Legal Advisor Harold Koh pointed out that the US applies Title 42 to individuals “to whom our legal obligations under the Refugee treaties and parallel statutes have undeniably attached,” but provides no affirmative screening for an individual’s fear of persecution. That omission “inevitably create[s] an unacceptably high risk that a great many people deserving of asylum will instead likely be returned to countries where they fear persecution, death, or torture.” The Title 42 policies thus “violate our legal obligation not to expel or return (“refouler”) individuals”— “especially migrants fleeing from Haiti.”

Second – with respect to policies and practices related to the Guantanamo Bay detention facility and the CIA’s post-9/11 torture program – the submission similarly ignores executive branch actions inconsistent with its CAT obligations. For example, throughout the reporting period, government lawyers have:

The report is equally problematic on these issues in other ways. For example, notwithstanding substantial evidence to the contrary, it maintains that men detained at Guantanamo receive health care comparable to that afforded to military personnel stationed at the Naval base. But it fails to mention, and the military has never denied, that medical professionals do not ask CIA torture program victims about their experiences, and so their medical records are devoid of trauma histories—leading to misdiagnoses and improper treatment. Perhaps most astounding, the submission states that the United States cannot disclose information related to CIA torture program rendition victims for privacy reasons; in other words, to serve victims’ interests. (We assume that the administration did not contact each of those victims to ask if they would prefer it protect their personal information rather than disclose that it tortured them through the rendition process itself or that it sent them to torture in third countries).

Similarly, the report outlines various measures aimed at standard setting and accountability for CBP use of force incidents, but fails to acknowledge the widespread evidence that these measures are failing to prevent repeated incidents of CBP misconduct, including sexual assault and other forms of violence, against migrants. Evidence of such abusive incidents include reports of individuals killed by border agents, such as Claudia Gomez who was killed in 2019; other individuals injured by border agents; abuses committed by Border Patrol’s Critical Incident Teams; CBP’s abusive treatment of Haitian migrants in September 2021 in Del Rio, Texas; and 160 reports in US government records of physical, sexual, and verbal abuse, as well as due process violations by US border officials, obtained and reported on by Human Rights Watch in October 2021.

Center for Victims of Torture