1) Vetting of Brett Kavanaugh on Human Rights is Insufficient

1) Vetting of Brett Kavanaugh on Human Rights is Insufficient. In a series of letters to Senators, Amnesty International urged the Senate not to hold a vote on Brett Kavanaugh’s appointment to the U.S. Supreme Court unless and until there is full disclosure of information relevant to his possible involvement in U.S. torture practices, and the allegations of sexual assault against him are fully investigated. No such information relevant to the question of his possible involvement in torture was made public and available information—including public communications by those who came forward with apparently relevant information, their legal representatives, and media investigations—indicates that the investigation ordered by President Trump on September 28 and carried out by the FBI was not thorough.

2) Trump Administration Continues to Degrade International Human Rights. Amnesty International USA condemned the news on September 10 that John Bolton, Assistant to the President for National Security Affairs, proposed that the Administration ban International Criminal Court (“ICC”) judges and prosecutors from entering the U.S., impose sanctions on them and prosecute them in the U.S. court system stating, “The United States’ attack on the ICC is an attack on millions of victims and survivors who have experienced the most serious crimes under international law and undermines decades of groundbreaking work by the international community to advance justice.”

Amnesty International USA is deeply alarmed that the State Department is withholding more than $25 million in funding for U.N. human rights programs including $7 million for the U.N. Human Rights Council and $16 million the Office of the High Commissioner for Human Rights.

3) Refugees – Administration Sets All-Time Low Refugee Cap that Disproportionately Harms Mid East and African Refugees. The administration has set the FY19 refugee admissions cap at 30,000 — the lowest number  in the history of the U.S. refugee program.  In the last year of the Obama administration the refugee ceiling exceeded 100,000.  Ryan Mace, Grassroots Advocacy and Refugee Specialist, was interviewed by Democracy Now, “This is very much a matter of life and death.”

4) Amnesty International Directors from Kenya, Ukraine, and Argentina Urge Congress to Sustain Robust Humanitarian Aid and to Protect Women and LGBTI Communities. On September 24 the heads of Amnesty International Kenya, Ukraine, Argentina briefed Congress on human right crises in the Americas, Africa and Europe. They urged Congress to sustain robust humanitarian aid, push the Trump Administration to resettle more refugees, and to stand up for the human rights of women and LGBTI communities worldwide. 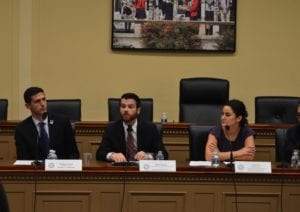 6) China – Congress Must Press China to End Round-ups and Detention of Muslim Groups. In Amnesty International’s statement  submitted for the September 26 House Foreign Affairs Committee hearing on “China’s Repression and Internment of Uighurs: U.S. Policy Responses,” we describe how Chinese authorities have intensified their crackdown on Uighurs, Kazakhs, and other predominantly Muslim groups through mass internment, intrusive surveillance, political indoctrination, and forced cultural assimilation. A September Amnesty International report captured the plight of people who have lost touch with relatives detained inside the Xinjiang Uighur Autonomous Region. Amnesty International interviewed more than 100 people outside of China whose relatives are missing, as well as individuals who were tortured while in detention camps. Congress should pressure the Chinese government to end detention of Muslim groups.

7) Myanmar – Secretary Pompeo Misses Key Opportunity to Protect the Lives of Rohingya. On September 24 the U.S. announced more than $185 million in humanitarian aid to displaced Rohingya in Myanmar and Bangladesh. Despite this positive announcement, the State Department at the same time declined to designate the atrocities committed by the Myanmar military as “crimes against humanity” or “genocide.” In response, Francisco Bencosme, Asia Advocacy Manager, commented: “This represents a significant missed opportunity on a crucial human rights issue and sends a worrying message about how the United States plans to address crimes under international law moving forward.”