1) President Trump’s Proclamation Violates the Rights of Asylum Seekers. In November 2018 President Trump issued a proclamation, along with a joint interim DOJ and DHS rule, that seeks to radically restrict the rights of asylum seekers arriving to the southern border. For the first time the U.S. government is inventing a new rule that requires asylum seekers to present themselves at official ports of entry. This new rule violates asylum seekers’ rights under U.S. and international law to seek asylum whether or not they are at an official port of entry. In October 2018 Amnesty International researchers traveled with the Honduran caravan as it migrated towards Northern Mexico. Mexican shelters are overflowing with thousands of families in children without proper food, medical care or protection. While some have chosen to seek asylum in Mexico, Mexico cannot be considered a uniformly safe country for all asylum seekers.

An October 2018 Amnesty International report revealed that Trump’s immigration policies resulted in more family separations than previously disclosed. Amnesty International condemns the  administration’s mass pushbacks of asylum seekers, use of excessive force by the U.S. military or CBP, denial of access to asylum to thousands of individuals which violates U.S. and international law, separation of families at the border, and detention of individuals and families that amount to the level of torture in some cases. Congress should 1) exercise greater oversight of DHS agencies to halt illegal pushbacks of asylum seekers; 2) pass legislation banning the separation and detention of families with children; 3) fund community-based alternatives to detention such as the Family Case Management Program; 4) increase funding for immigration teams and asylum officers; 5) decriminalize irregular entry into the U.S. in line with international standards and 6) ratify the U.N. Convention on the Rights of the Child. 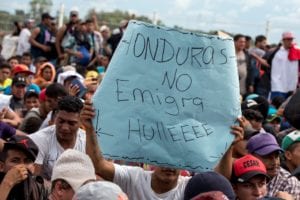 Above: On October 22 Honduran migrants were stuck at the Suchiate River on the border between Mexico and Guatemala in fear of reprisal by authorities if they cross the river in rafts.

Above: On October 11 Amnesty International USA protested for an independent investigation into the murder of Jamal Khashoggi in front of the Saudi Arabia Embassy.

4) Hungary – State Department Should Reinstate Program to Promote Independent Media. Independent media in Hungary is highly restricted, with supporters of Hungarian Prime Minister Viktor Orbán enjoying a near-monopoly ownership of print and broadcast media and government officials routinely denying advertising revenue to outlets that carry a critical line. The Hungarian government has effectively shut down independent media outlets and tacitly encouraged a campaign of harassment targeting journalists and others critical of Prime Minister Orbán. In October 2018 the State Department gutted a program to train Hungarian journalists. Congressional offices should reaffirm their support for this funding to ensure objective media in Hungary and press Hungarian officials to ensure fundamental freedoms for journalists.

Breaking News: On October 17 Vietnamese blogger Nguyễn Ngọc Như Quỳnh, also known as Mother Mushroom, was finally released after being jailed for over two years. She was exiled from Vietnam and sent with her family to the United States, where she currently resides. Her release brings hope to over 100 prisoners of conscience jailed in Vietnam today. 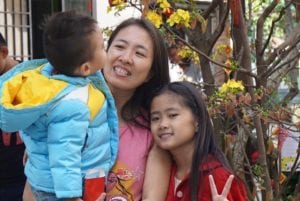 Above: On October 17 Me Nam (Mother Mushroom) was reunited with her family.

6) Myanmar – Amnesty International Withdraws the Ambassador of Conscience Award from Aung San Suu Kyi. On November 13 Amnesty International’s Secretary General announced the recession of the Ambassador of Conscience award – Amnesty International’s highest honor — from Aung San Suu Kyi. She has chosen to overlook and excuse the brutal oppression and crimes against humanity committed by the military against the Rohingya and against minorities in the Kachin and northern Shan States. As an organization which campaigned tirelessly for her release – and the release of all prisoners of conscience in Myanmar – Amnesty International is dismayed that Myanmar civil authorities have not only failed to repeal or amend repressive laws but has actively used them to curb freedom of expression, and arrest and imprison human rights defenders, journalists and other peaceful activists.