U.S. – In the Wake of Three Mass Shootings in August, Amnesty International USA Demands That Congress Immediately Pass Legislation to Prevent Gun Violence and Save Lives

3) What’s Coming Down the Pike?

September 18: Amnesty International briefing “Ukraine: Where does US Policy go from here?”, CVC 268 at 4 PM.

U.S. – In the Wake of Three Mass Shootings in August, Amnesty International USA Demands That Congress Immediately Pass Legislation to Prevent Gun Violence and Save Lives. In the aftermath of the mass shootings in Gilroy, El Paso, Dayton and Odessa, Amnesty International USA called on Congress to convene an August emergency session to pass legislation to reduce gun violence and save lives.

On August 15, Amnesty wrote to Senate leaders to demand the Senate return to Washington for an emergency session to mandate universal background checks on all gun sales. Amnesty also urged House leaders to return to Washington for an emergency session to pass legislation banning assault weapons and pass extreme risk protection orders. Amnesty submitted a statement of support for the Assault Weapons Ban Act of 2019 (H.R. 1296), the Extreme Risk Protection Order Act of 2019 (H.R.1236) and the Disarm Hate Act of 2019 (H.R. 2708), which will be marked up by the House Judiciary Committee during the week of September 9. 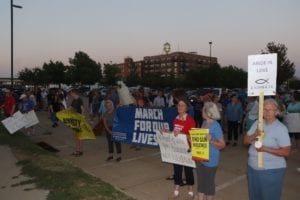 Above: On August 8, Amnesty International, March for Our Lives, and Moms Demand Action protested in Cedar Rapids to demand that Senators Grassley and Ernst support universal background checks.

a) Venezuela – Amnesty International Urges the Senate to Provide Temporary Protected Status (“TPS”) for Venezuelans. On July 25, the House passed the Venezuela TPS Act (R. 549), which allows Venezuelans to qualify for temporary protected status (“TPS”). TPS would prevent the deportation of Venezuelans from the U.S. and would allow them a means of survival, via work authorization, while they are here. Venezuela is undergoing a major human rights crisis that has led to the exodus of four million Venezuelans. The Congressional Budget Office estimates that approximately 200,000 Venezuelans in the U.S. could benefit from TPS. The Senate must follow the House’s lead and pass this crucial legislation.

b) Central American Children – Congress Must Protect the Flores Settlement to Prevent the Indefinite Detention of Children and Families. In August, the Department of Homeland Security and the Department of Health and Human Services published final regulations as required by the 1997 Flores settlement. The rules permit the indefinite detention of families and children and eviscerate minimal standards of detention for children, in stark contravention of the Flores settlement and human rights principles. Amnesty International filed an amicus brief in support of the challenge to the new regulations, and previously issued comments opposing the draft regulations. Congress should cease funding for family detention which irreparably harms children.

c) Hong Kong – Amnesty International Calls for a Full Investigation into Unnecessary and Excessive Police Force on Protesters. While Hong Kong’s Chief Executive has announced the official withdraw of the Extradition Law Amendment Bill, Amnesty International is demanding an independent and thorough investigation into the police’s excessive use of force on protesters. The U.S. should push for the suspension of transferring crowd control equipment to Hong Kong.

d) Honduras – President Hernandez Must Stop Crackdown on Peaceful Protesters. Since April, Hondurans have protested nationwide for the resignation of President Hernandez. In a desperate attempt to silence the dissent, armed forces have used tear gas and rubber bullets on peaceful protesters. Security forces have killed at least six people in these protests. Amnesty International documented how authorities not only used excessive force to repress peaceful protesters, but also arbitrarily detained and held protesters in deplorable conditions for months, denying them their right to due process. Amnesty International wrote a letter to President Hernandez expressing grave concern with the crackdowns and demanding respect for human rights, including the right of free expression.

e) Afghanistan – Congress Must Cosponsor and Pass the Afghan WIN Act (H.R. 4097). Amnesty International USA urges all members to cosponsor the Afghan “Women’s Inclusion in Negotiations Act” (H.R. 4097). Afghan women and girls have made tremendous strides since the fall of the Taliban government in 2001 and have much to lose as Afghan peace talks advance. Yet since the start of the U.S.-Taliban peace talks, women have largely been barred from the negotiating table. This legislation would facilitate Afghan women’s participation in the U.S.-Taliban talks and mandate the creation of a plan that prioritizes them as part of any reconstruction efforts after U.S. military forces leave the country.

f) Georgia – Russia Has Instituted Discriminatory Policies During Occupation of Georgian Territory. Since late June, thousands of Georgians have demonstrated against the Russian government’s occupation of the provinces of Abkhazia and South Ossetia. On July 3, Amnesty International released a report exploring how Russia’s decision to erect fixed barriers on the border between South Ossetia/Abkhazia and the rest of Georgian territory has cut farmers off from their livelihoods, denied Georgians access to holy sites, eroded living standards, and instituted discriminatory policies targeting Georgians. Amnesty International USA calls on the U.S. government to diplomatically support efforts by the EU monitoring mission and raise Russia’s human rights violations in Georgia.

g) Myanmar – Former Child Soldier Aung Ko Htwe Released From Prison. Aunt Ko Htwe was imprisoned after speaking about being abducted and forcibly recruited into the military as a child during his interview with Radio Free Asia. Aung Ko Htwe was charged under Section 505(b) of the Penal Code, which can be used to prosecute anyone who makes, publishes or circulates information that may cause “fear or alarm to the public or to any section of the public whereby any person may be induced to commit an offense against the State or against the public tranquility.” Amnesty demands that on the Myanmar government repeal and reform laws in accordance with international human rights law.

3) What’s Coming Down the Pike?

Amnesty International USA Congressional Briefing on U.S. Policy in Ukraine. On September 18, the Congressional Ukraine Caucus and Amnesty International USA will co-host a briefing “Ukraine: Where does US Policy go from here?” in Capitol Visitors Center 268 at 4 PM. Amnesty’s Daniel Balson will join Michael Carpenter of the Penn Biden Center, Melinda Haring of the Atlantic Council and Nina Jankowicz of the Wilson Center to present policy options for Congress on U.S.-Ukraine relations. Representatives Kaptur and Fitzpatrick will offer opening remarks. Refreshments will be provided. Please RSVP to [email protected].

For more human rights updates in Asia, the Americas, the Middle East and Eurasia, see our full September newsletter.