3) DHS Must End the Separation and Detention of Children and Families and Ensure Access to Humanitarian Protection for Asylum Seekers at the U.S.-Mexico Border

2) Amnesty International USA Calls on Senate to Pass Resolution Terminating President’s National Emergency. Amnesty International USA supports H.J.Res 46 to terminate the President’s national emergency and urges the Senate to quickly pass the joint resolution. By declaring a national emergency, the President has manufactured a crisis for the purpose of militarizing the southern border region and blocking asylum seekers from safety in the U.S. The emergency declaration enables the President to raid military construction accounts to fund his border wall. This action constitutes an end-run around the Congressional appropriations process and will have a devastating impact on children, asylum seekers, and border residents, including Indigenous communities. 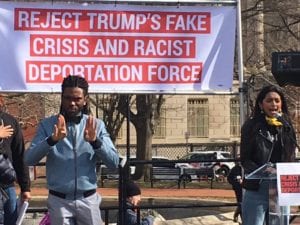 Above: On February 18 Amnesty Americas Advocacy Director Charanya Krishnaswami spoke at a rally outside the White House protesting the President’s national emergency declaration.

3) DHS Must End the Separation and Detention of Children and Families and Ensure Access to Humanitarian Protection for Asylum Seekers at the U.S.-Mexico Border. In February, Amnesty International USA submitted statements for House Judiciary Committee and House Energy and Commerce hearings on the Trump administration’s family separation policies. The Trump administration’s deliberate and punitive practice of forced family separations in some cases constituted torture and have been leveraged to compel families to abandon their asylum claims.

Amnesty International USA submitted a statement for the March 6 House Homeland Security Committee oversight hearing on the Department of Homeland Security (“DHS”). Amnesty International has concluded that DHS has 1) turned back asylum seekers at ports of entry; 2) separated children from their parents; and 3) detained record numbers of asylum seekers, including children, some who are sexual abused and even die in DHS custody.

5) Venezuela – Amnesty International Calls on Venezuelan Authorities to End Human Rights Violations. In February, Amnesty International submitted statements for House Foreign Affairs Committee and Senate Foreign Relations Committee hearings on the human rights violations in Venezuela. In January 2019, Venezuelan security forces, under the command of Nicolas Maduro, committed six extrajudicial executions, arbitrarily detained 137 people, and used excessive force on protesters, in which 41 people died from gunshot wounds. The Venezuelan government has failed to adequately respond to the socioeconomic crisis, including lack of access to basic health and food and an inflation rate of one million percent. Congress must denounce the human rights abuses and strengthen support for civil society and human rights defenders in Venezuela.

7) China – Congress Must Pass Legislation to Halt Human Rights Violations of Turkic Muslims. Amnesty International USA calls on Congress to support the Uighur Human Rights Policy Act of 2019 to pressure Chinese authorities to end the detention of Turkic Muslims. Up to one million Uighurs and other ethnic Muslims are being arbitrarily detained in “political education” camps across Xinjiang province. Chinese authorities have detained people for their perceived disloyalty to the government and Chinese Communist Party. Amnesty International has called on the U.N. Human Rights Council to adopt a resolution establishing an international fact-finding mission to investigate these atrocities.

8) U.S. Must Stop Weapons Sales to the Saudi Arabia-UAE Led Coalition. In a statement for the March 6 House Foreign Affairs Committee hearing, Amnesty International USA documented how the human rights situation in Yemen continues to deteriorate amidst the ongoing conflict and humanitarian crisis. The U.S. directly assists the Saudi Arabia-UAE led coalition’s campaign that has led to one of the most severe contemporary humanitarian crises of our time. Congress must pass the Saudi Arabia Accountability and Yemen Act of 2019 to suspend weapon sales to Saudi Arabia, pass the Yemen Refueling Prohibition Act to prohibit U.S. refueling of Saudi Coalition Aircraft engaged in the war in Yemen, and hold accountable all actors responsible for war crimes and civilian casualties. 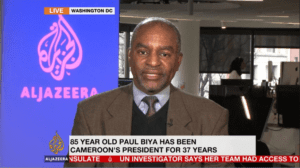 Above: On February 26 Refugee Specialist Ryan Mace testified before the House Foreign Affairs Africa Subcommittee on the global refugee crisis.

13) Amnesty International Documents Increasing Use of Violence to Repress Dissent in Middle East. A February Amnesty International report examines how crackdown of civil society actors and political opponents increased significantly in 2018 throughout the Middle East. Authorities used arbitrary detention, excessive force against protesters, and administrative measures to restrict human rights defenders. The killing of Palestinian protesters by Israeli forces in Gaza and the murder of journalist Jamal Khashoggi in a Saudi consulate glaringly illustrate the impunity of Middle Eastern states that routinely use lethal violence to repress dissent.