6) Sri Lanka – Refugees are Under Attack After Easter Bombings

1) U.S./Mexico – In FY19 Border Supplemental, Congress Must Ensure Safe and Humane Processing of Asylum Seekers. Amnesty International USA released a statement on the FY2019 Border Supplemental package ahead of the House vote on June 25. Amnesty’s top priority is the protection of asylum seekers at the southern border, and we are deeply concerned about the potential misuse of funding to further criminalize and harm people seeking safety at the U.S. southern border.  Amnesty’s statement provides detailed spending recommendations affecting DHS, DHHS, DOJ, and DOD. 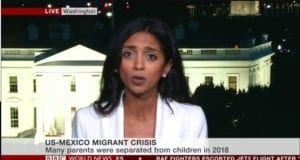 Above: On June 25 Americas Advocacy Director Charanya Krishnaswami spoke on BBC World News about concerns for the safety and freedom of children seeking protection at the U.S. southern border.

2) Saudi Arabia – Senate Blocks Trump Administration’s Emergency Arms Sales to Saudi-UAE Led Coalition. On June 20 the Senate approved the bipartisan S.J.Res.38 to block $8 billion emergency arms sales to the Saudi-UAE led coalition ordered by the Trump administration. The Saudi-UAE coalition has committed horrific human rights violations in Yemen, some of which amount to war crimes. The supply of arms manufactured in the U.S. have been used in deadly strikes against civilians. Amnesty International USA calls on Congress to pass the broader Saudi Arabia Accountability and Yemen Act (S.398) to block all future arms sales to the Saudi-UAE led coalition.

3) Sudan – Congress Must Hold Sudan Accountable for Brutal Crackdown Against Non-Violent Protesters. International criticism has grown as security forces continue to commit human rights violations, and the Sudanese government has ignored demands for reform. On June 21 the House Foreign Affairs Committee passed H.Res. 432 condemning the violence and held hearings on June 25. The Senate introduced S.Res. 188 calling for the government to respect human rights, ensure accountability for abuses and address the crisis in a non-violent manner. Amnesty International USA calls on Congress to pass these resolutions and call for a comprehensive arms embargo, the immediate encampment of the Rapid Support Forces and the end of any policing functions by its members.

4) Myanmar – Congress Must Pass Legislation to Hold Myanmar Military Accountable for Human Rights Abuses. On June 20 the House Foreign Affairs Committee passed the bipartisan Burma Political Prisoners Assistance Act (H.R. 2327) and the BURMA Act (H.R. 3190) during committee markup. H.R. 2327 requires the Secretary of State to work with organizations to free prisoners of conscience in Myanmar. Additionally, H.R. 3190 imposes a series of measures to hold the Myanmar military accountable for their abuses by barring U.S. military assistance to Myanmar, creating more reporting requirements, and supporting investigations of war criminals as well as other sanctions. Amnesty International USA urges the House to quickly pass both bills.

5) Hong Kong – Police Used Unnecessary and Excessive Force Against Protesters. Peaceful protesters took to the streets on June 12 to voice concerns over the extradition law amendments proposed in Hong Kong. In a June 21 report, Amnesty International has verified footage in which police officers used unlawful force against these protesters, including beating of subdued protesters, firing rubber bullets at a protester’s head, firing tear gas against protesters trapped in a confined area and aggressive tactics against journalists. Amnesty International remains concerned about the proposed amendments as they would allow authorities to target journalists, NGO leaders and human rights defenders.

6) Sri Lanka – Refugees are Under Attack After Easter Bombings. Following the April 21 attacks that killed over 250 people, mobs took to the streets in Negombo and targeted refugees and asylum seekers from Afghanistan, Pakistan and Iran. A new Amnesty International report details how these refugees have been pushed out of their homes.

7) World Refugee Day – Amnesty International USA Calls on Congress to Pass Legislation Committing to Resettle 95,000 Refugees Per Year. Amnesty International USA Executive Director Margaret Huang spoke at a press conference to mark World Refugee Day hosted by Refugee Council USA. She called on Congress to pass the NO BAN Act (S. 1123 /H.R. 2214), which would prohibit discrimination based on religion, and to pass the GRACE Act (S. 1088 /H.R. 2146), to prevent the President from setting a refugee admissions at a level below 95,000. She also called on Congress to restore critically needed funding for the U.N. Relief and Works Agency for Palestine Refugees.

On June 17 Amnesty International USA released a report detailing the effects of the U.S.’s discriminatory and restrictive policies on refugees, starting with the Muslim ban signed in January 2017. Since the Muslim ban went into effect, refugees offered resettlement to the U.S. from Muslim-majority countries have ground to a halt. At the end of May 2019 only 347 Syrian refugees had arrived to the U.S. This contrasts with 11,204 Syrian refugees resettled to the U.S. in 2016 from Jordan and Lebanon. Syrians still make up the largest forcibly displaced population in the world.

Above: Kaden* and his family outside their home in Zaatari refugee camp in Jordan. They would like to be resettled anywhere and are unable to return to Syria. *name changed

8) PRIDE – Amnesty International USA Hosts Capitol Hill Briefing on Pride Around the World. At the June 18 briefing, Amnesty International experts gave updates on recent LGBTI victories in Ecuador, Botswana and Taiwan, as well as on major setbacks in other countries. Congress must pass the GLOBE Act (reintroduction pending), which would support LGBTI communities through U.S. human rights and development programs, and the International Human Rights Defense Act (H.R.1857), which would establish a Special Envoy for Human Rights of LGBTI Peoples in the State Department’s Bureau of Democracy, Human Rights, and Labor.