1) Africa – Congress Must Investigate Civilian Casualties from U.S. Airstrikes in Somalia. On March 20 Amnesty International released a comprehensive report on civilian casualties resulting from U.S. drone strikes in Somalia. The report documents 14 civilians killed and eight injured from five U.S. strikes in Somalia – just five of the 110 that the Department of Defense (“DOD”) has acknowledged conducting there in just the past two years. Although the DOD originally claimed to have killed zero civilians, Amnesty’s report reveals that is not true. In early April 2019 the U.S. Africa Command admitted that Somalia airstrikes in 2018 killed at least two civilians.

b) Saudi Arabia – United Nations (“UN”) Must Investigate Murder of Washington Post Journalist Jamal Khashoggi. Secretary Pompeo’s April 2019 announcement barring 16 Saudis from entering the U.S. is an insufficient response to the brutal murder of Khashoggi. Six months after the murder, the U.S. has yet to call for an independent UN investigation – an indispensable step towards truth and accountability.

c) Kyrgyzstan – Ratifies Convention on the Rights of Persons with Disabilities (“CRPD”). In March the President of Kyrgyzstan ratified the CRPD. In 2018 thousands of Amnesty International activists wrote letters on behalf of Gulzar Duishenova, a disability rights activist who faced discrimination in Kyrgyzstan. The U.S. has yet to ratify the CRPD.

5) Amnesty International USA Testifies Before Congress on Oversight of Arms Transfers. Susan Waltz, Amnesty International expert in military security policy and professor at the University of Michigan, testified at a March 26 House Foreign Affairs Oversight Subcommittee hearing on the Trump administration’s plans to switch oversight of U.S. arms exports from the State Department to the Commerce Department. The U.S. is the world’s largest arms exporter including weapons used to commit human rights violations. The change in classification will make semi-automatic firearms and associated ammunition harder to track after leaving the U.S., increasing the chances they will be used to commit human rights abuses.

a) Brunei – New Penal Code Allows Stoning for Adultery or Same-Sex Acts. In early April a new penal code went into effect in Brunei that would allow stoning for adultery or same-sex acts. Congress and the Trump administration must demand that the Sultan of Brunei stop these barbaric changes that threaten the safety and lives of Brunei citizens. 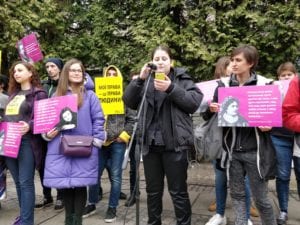 Above: Vitalina Koval, a Ukrainian gender equality and LGBTI activist, spoke during a protest on International Women’s Day.

Above: Aasif Mandvi, a correspondent on “The Daily Show,” hosted the AIUSA Media Awards on April 3.

9) Charanya Krishnaswami – New AIUSA Americas Advocacy Director. In February, Charanya joined AIUSA as the Americas Advocacy Director. She previously worked for the U.N. refugee agency where she managed refugee status determination work in the Caribbean. She also worked as an immigration lawyer for Central American children and families facing deportation from the U.S. Charanya’s work will focus on the protection of refugees, asylum seekers, and human rights defenders in Central America, Mexico, and Venezuela.

What’s Coming Down the Pike? May 6 Amnesty International USA Capitol Hill Lobby Day. On May 6 about 150 activists will hit Capitol Hill for AIUSA’s Lobby Day. They will urge Congress to pass the Background Check Expansion Act (S. 42) requiring universal background checks for all gun sales, and the Saudi Arabia Accountability and Yemen Act (S. 398) to end the sale of U.S. arms to the Saudi-Emirati led coalition conducting human rights abuses in Yemen.