Human Rights In India Under Attack 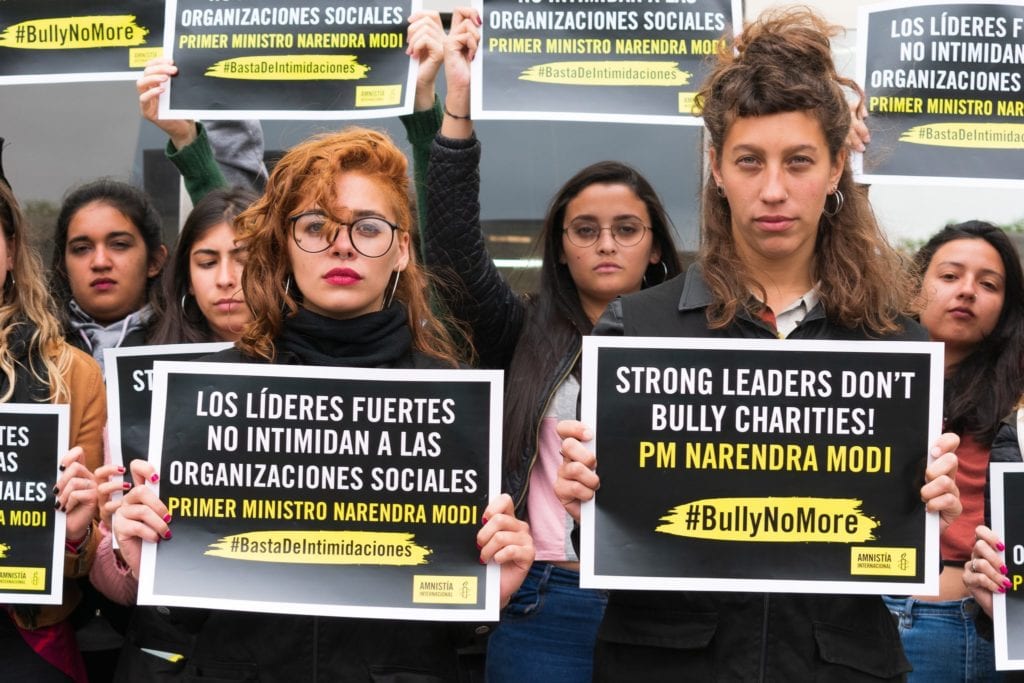 The Government of India, led by the Prime Minister Narendra Modi, is desperately trying to crush human rights work in India. The raid and subsequent freezing of accounts of Amnesty India is the most recent and chilling evidence of it. This action was taken in the absence of a formal complaint and prior notice — a clear violation of fair trial guarantees. With their accounts frozen, Amnesty India’s vital human rights work has been effectively stopped and the organization now faces an existential crisis. Prime Minister Narendra Modi’s government is also attempting to tarnish Amnesty International’s reputation in India through selective leaks of evidence gathered during the investigations by the authorities to certain pro-government media outlets effectively weaponizing the media against it. Not only this, other organizations and individuals who work on human rights and justice are being targeted in a chillingly similar manner.

Amnesty India speaks out for women’s rights, has exposed the use of excessive force, and stood up for Indigenous (Adivasi) communities whose rights are being abused by corporations. Amnesty members are raising their voices on important issues. We can only assume the authorities are trying to punish them. Over the last six years, people in India have taken over 4.5 million actions to support Amnesty India’s work. Against this backdrop, Amnesty International is calling on Prime Minster Narendra Modi to allow people and groups to freely work on human rights and to stop trying to crush human rights work.

On October 25, 2018, Amnesty India endured a ten-hour-long raid conducted by a group of officers from the Enforcement Directorate (ED), a financial investigation agency under the Ministry of Finance. They entered the premises and locked the gates behind them. Some of the staff were ordered to not leave, shut their laptops and not use their mobile phones. Similar action was undertaken against Greenpeace India in early October.

Following the separate raids, and despite both organizations operating in compliance with relevant national regulations, the accounts of Amnesty India and Greenpeace India have been frozen. Both organizations are now challenging this action in the High Court in Karnataka, a state in Southern India. The authorities are claiming that the organizations have violated foreign funding regulations.

Due to the freezing of accounts (of company as well as the Trust entity) which led to a difficult situation in terms of operations-related expenses, Amnesty India had to let go of a lot of its staff members from both the entities. In total, contracts of 68 employees and consultants across different teams had to be terminated. This amounts to a reduction in Amnesty India’s workforce by over 30%.

However, even before the investigations are complete and charges filed, the Government of India has started a smear campaign to tarnish Amnesty International’s reputation in India. This is being done through selective leaks of documents and evidence gathered by the ED so far, to pro-government media outlets. There appears to be a deliberate attempt to frustrate legal processes and subject Amnesty India to a media trial.

Other NGOs working on human rights have also faced similar actions. One of the repressive foreign funding laws that is often used by government authorities to obstruct the work of non-governmental organizations is the Foreign Contribution (Regulation) Act (FCRA). Authorities have cited financial ‘irregularities’ and activities that are against ‘public interest’ and ‘national interest’ to cancel numerous NGOs’ foreign funding licenses under the FCRA. Repressive laws are being used to stifle the rights to freedom of expression, association, and assembly in the country. Successive governments have used the (FCRA) as a political tool to harass groups critical of government views and actions. The FCRA falls short of international standards and enables violations of the rights to freedom of association and expression.

Some of the organizations that have been targeted using this law include Lawyers Collective, People’s Watch, Sabrang Trust and Navsarjan Trust, whose licenses remain suspended or cancelled. Amnesty International believes that these actions by the Indian authorities violate the rights to freedom of expression, assembly, and association, which are guaranteed by the Indian Constitution and international human rights law.

Amnesty India and Greenpeace India are just the latest target of the Indian government’s assault on civil society. In a series of brutal crackdowns on human rights defenders in the country from June to August 2018, ten prominent activists were arrested under a draconian counterterrorism law that is often used to silence government critics.

In a series of crackdowns on human rights defenders in the country, the Maharashtra police on June 6 arrested activists Surendra Gadling, Rona Wilson, Sudhir Dhawale, Shoma Sen, and Mahesh Raut. On August 28, Maharashtra police arrested activists Sudha Bharadwaj, Gautam Navlakha, Vernon Gonsalves, Arun Ferreira, and Varavara Rao, and raided the homes of several others. Arrested under the Unlawful Activities (Prevention) Act (UAPA), authorities alleged that these human rights defenders had incited Dalits, at a large public rally on December 31, 2017, leading to violent clashes the next day in which one person died and several were injured. The UAPA has often been abused and used to detain people peacefully exercising their rights to freedom of expression and association. Parts of the UAPA do not meet international human rights standards and are likely to lead to human rights violations. Nine out of the ten activists are now in jail. On October 1, the Delhi High Court ordered Gautam Navlakha’s release from house arrest.