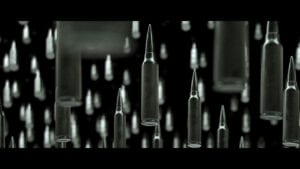 Still image from Nathan Bayliss animated video that illustrates the global flow of arms around the world and Amnesty International’s work in promoting the treaty for 20 years.

This video animation is both a celebration of the Treaty ‘coming into force’ on the 24th of December 2014 and a call to governments around the world to accept and uphold the treaty and put pressure on the world’s biggest exporters and importers of arms and ammunition to join the treaty and endorse it too.

The full establishment of a global Arms Trade Treaty (ATT) and its robust implementation is an idea Amnesty International initiated and one of our top priorities. After twenty years of global campaigning by Amnesty International with its partners, governments at the United Nations voted overwhelmingly to adopt an ATT on 2 April 2013. On 24th December 2014, after 50 ratifications, the Treaty will enter into force. The rules, if properly implemented, will stop a wide range of arms flows when the sending state knows those weapons would be used for human atrocities and grave abuses of human rights.

The global Arms Trade Treaty (ATT) enters into force on 24 December, marking a breakthrough for human rights after more than two decades of campaigning by Amnesty International and its NGO partners around the world.

For the first time, there is a treaty that explicitly embeds the human rights implications of each arms sale into every transfer.

Amnesty International and its supporters have lobbied and campaigned relentlessly for an ATT since the mid-1990s. As the first-ever legally binding treaty of its kind, it will block the flow of arms to governments that would use them to commit atrocities.

The landmark Arms Trade Treaty (ATT), regulating the international trade in conventional arms – from small arms to battle tanks, combat aircraft and warships – will enter into force on 24 December 2014.

There are animations of tanks, bullets, helicopters, bullets and guns.