On July 20, 2021, the Board of Directors of Amnesty International USA wrote to congressional leaders to urge them to swiftly pass the Break the Cycle of Violence Act (S.2275, H.R.4118) to provide at least $5 billion in federal funding over eight years for community gun violence prevention programs. With sustained investment into gun violence prevention programs and a national comprehensive strategy aimed at reducing gun violence, particularly in Black and Brown communities, the U.S. can make inroads to reducing gun violence in all communities and ensure the right of everyone to live free from the threat of gun violence. 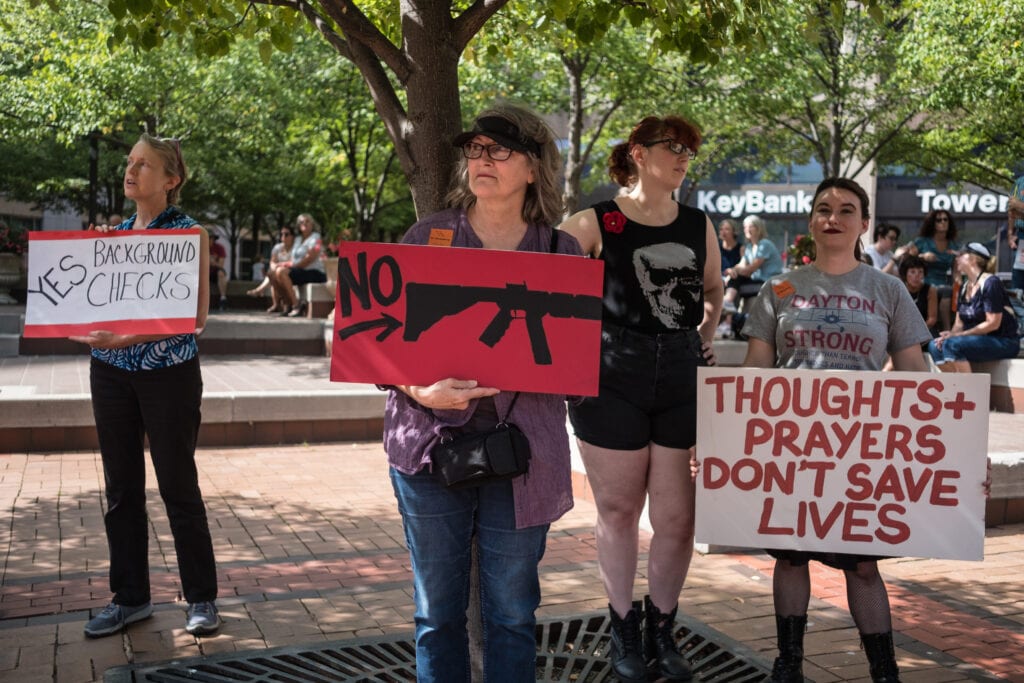 We the Board of Directors of Amnesty International USA urge you to swiftly pass the Break the Cycle of Violence Act (S. 2275/H.R. 4118) to provide at least $5 billion in federal funding over eight years for community gun violence prevention programs.

Gun violence in the U.S. is a human rights crisis, disproportionately impacting Black and Brown communities nationwide. Gun homicides are the leading cause of death among Black men ages 15–34 and the second-leading cause of death for Latino men and boys of the same age range. Black males are more than ten times as likely to be the victims of gun homicides than white males. In 2019, 14,414 people died from gun homicides in the U.S. Nearly 60%—8,607—of gun homicide deaths were Black people. Black Americans represent just 14.7% of the U.S. population.

With a surge in gun sales in the wake of COVID-19, shootings are increasing across the U.S., contributing to the crisis. According to the Centers for Disease Control and Prevention (CDC), there were 39,707 deaths in 2019, the most recent year for which government data is available, with 14,414 of those being gun homicides. The Gun Violence Archive, a nonprofit that tracks and documents gun injuries and deaths, published data in May 2021 indicating that the number of deaths in 2020 had risen to a staggering 43,554, with 19,398 of those being gun homicides.

Evidence-based, community violence prevention programs have been proven to reduce gun violence and save lives, while investing resources in impacted communities. There are three well-established models of gun violence prevention programs that have proven successful in reducing violence, some of which are referenced in both President Biden’s executive actions and guidance and in the Break the Cycle of Violence Act. The Group Violence Intervention (GVI) strategy, a form of problem-oriented policing (as opposed to traditional “incident-driven” policing), was first used in the enormously successful Operation Ceasefire in Boston in the mid-1990s, where it was associated with a 61% reduction in youth homicide. The program has now been implemented in a wide variety of American cities, with consistently impressive results. An analysis of more than twenty GVI programs showed a significant reduction in firearm violence.  The most successful of these programs have reduced violent crime in cities by an average of 30% and improved relations between law enforcement officers and the neighborhoods they serve. The GVI model has a remarkably strong track record: a documented association with homicide reductions of between 30% and 60%.

A study of Cure Violence model, first implemented in Chicago, found that its implementation in several targeted districts in Chicago was associated with a 38% greater decrease in homicides and a 15% greater decrease in shootings, compared to districts that did not receive the intervention. A 2018 evaluation of Philadelphia’s Cure Violence Program found that shootings decreased significantly, compared to other matched comparison areas.

An example of Hospital Based Violence Intervention, the third model of evidence-based violence prevention programs, is the San Francisco Wraparound Project, first introduced in 2005. In its first six years of operation, the Wraparound Project was associated with a fourfold decrease in injury recidivism (re-injury from gun-shot wounds) rates. Moreover, studies have shown that this form of intervention saves hospitals money by preventing future injuries, both for the patient and for anyone the patient may have considered retaliating against.

Investment, training, and support for culturally appropriate violence prevention workers with lived experience in impacted communities has proven successful in cities across the U.S., yet lack of political will has resulted in many advocates and community leaders working with limited or no resources. For example, Amnesty International spoke with Lamar Johnson of B.R.A.V.E. Chicago, who told us: “Our after-school program is a nonprofit- we run it through the church—and the funding comes mostly from private donors. The majority of the city’s budget goes to law enforcement—and that’s not just Chicago, that’s most cities. We’ve met with mayors’ administrations so many times and presented our case, but they don’t give us funding. The whole system is so broken, because the focus is on the criminal justice system. If someone is addicted to drugs, they go to jail before they go to the hospital to get treatment. It’s the mindset.”

Recognizing the effectiveness of these programs and the heroic people who lead them, on March 31, 2021, President Joe Biden announced his intention to include $5 billion for gun violence prevention programs in the American Jobs Plan. This builds on the efforts of Senator Booker and Representative Horsford to pass the Break the Cycle of Violence Act, first introduced in the 2019-2020 Legislative Session. If passed, it would provide funding for federal grants to communities that experience 20 or more homicides per year and have a homicide rate at least twice the national average, or communities that demonstrate a unique and compelling need for additional resources to address gun and group-related violence. Each grant awarded would be renewable over five years, and funds will be commensurate with the scope of the proposal and the demonstrated need.

While it is impossible to place a dollar amount on a person’s life or the cost of that loss to their families, communities, and loved ones, the astronomical financial impact of gun violence on U.S. society cannot be overlooked. According to a 2020 study by physicians and researchers, gun violence costs the U.S. health care system $170 billion per year. The Health Alliance for Violence Intervention estimates it would cost an estimated $827 million per year, or $5.63 billion over eight years, to fund sustained and adequate violence intervention programs in the 48 U.S. cities with the highest rates of violence—hence the call on Congress to pass at least $5 billion over eight years for Community Gun Violence Prevention Programs.

The next few weeks and months will be critical in ensuring that Congress passes the Break the Cycle of Violence Act (S. 2275/H.R. 4118) to ensure at least $5 billion in federal funding over eight years for community gun violence prevention programs that save lives.

Please do not hesitate to contact Ernest Coverson, Gun Violence Campaign Manager, at [email protected], or Joanne Lin, National Director of Advocacy and Government Affairs, with any questions at (202) 281-0017 or [email protected].

The Board of Directors of Amnesty International USA