The attached document describes how Bosnian authorities have failed to provide justice and recompense for 20,000 survivors of wartime sexual violence. It draws on Amnesty International’s recent report, “We Need Support, not Pity: Last Chance for Justice for Bosnia’s Wartime Rape Survivors”.

With the breakup of Yugoslavia, Bosnia descended into a horrifying war. Thousands of women and girls were subjected to rape and other forms of sexual violence by military and paramilitary groups. A quarter century later, women survivors are still piecing together their lives with little access to medical, psychological, and financial assistance from the state. Their attempts to seek justice have been stymied by Bosnia’s byzantine and fragmented judicial system and limited witness protection capacity.

Congress can help these women. Amnesty International is calling on Congress to maintain U.S. government funding for judicial reform efforts in Bosnia and to encourage authorities in Bosnia to remove legal obstacles for survivor redress. 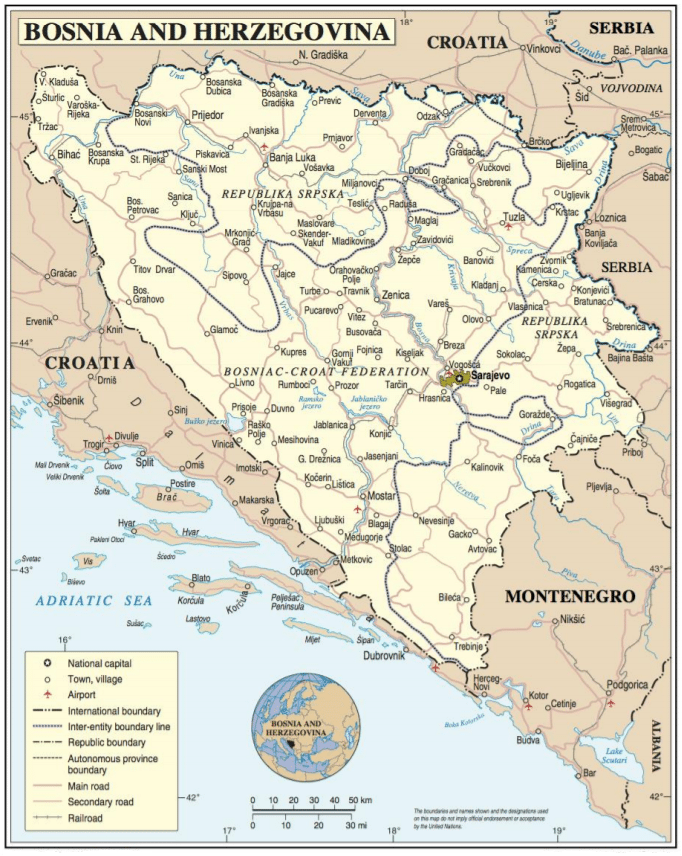 Re: April 18, 2018 hearing on the “Dayton Legacy and the Future of Bosnia and the Western Balkans”

On behalf of Amnesty International (“Amnesty”) and our more than seven million members and supporters worldwide, we hereby submit this statement for the record.

This statement summarizes the findings of an Amnesty report published in September 2017 entitled We Need Support, Not Pity: Last Chance for Justice for Bosnia’s Wartime Rape Survivors. The report describes how Bosnia has failed thousands of women and girls who survived rape and sexual assault during the horrific violence of Bosnia’s 1992-1995 conflict.

Between June 2015 and May 2017, Amnesty conducted field research in Bosnia and Herzegovina (“BiH”), interviewing 89 participants, including 25 survivors of sexual violence whose stories are representative of many others. In compiling the report, Amnesty spoke with associations of survivors, as well as government officials from BiH’s Parliament, Ministry of Justice, Ministry of Labor, Ministry of Human Rights and Refugees, and other government officials. This report provides an updated

understanding of survivors’ search for justice as previously detailed in numerous investigations and statements by Amnesty.

In 1992, the Socialist Republic of Bosnia and Herzegovina seceded from Yugoslavia and conflict broke out between its Muslim Bosniak, Catholic Croat, and Orthodox Serb communities. The resulting war lasted three years and was marked by gross human rights violations by all sides. The use of rape and other forms of sexual violence during the war was widespread. Rape was committed on a large scale by all parties to the conflict, although the majority of victims were Bosnian Muslims. In total, more than 20,000 women suffered rape and other forms of sexual violence at the hands of military and paramilitary forces. Many were imprisoned in so-called “rape camps,” where they were enslaved, tortured, and forcibly impregnated as part of a campaign of violence and ethnic cleansing.

Our research found that, nearly two decades after the end of the conflict, BiH authorities have failed to provide support and redress to women survivors of conflict- related sexual violence. Under international law, the BiH state is responsible for guaranteeing victims’ rights to justice, truth and reparation. This obligation includes equal and effective access to justice; and adequate, effective and prompt reparation for the harm suffered, including restitution, compensation, rehabilitation, satisfaction and guarantees of non-repetition.

The government’s stated commitment to reconstructing Bosnian society and rebuilding civic trust is not seen as credible by survivors of rape. While some few women have secured appropriate redress, many more have been denied the justice and recompense to which they are entitled. Their frustrated attempts to seek compensation are due to the labyrinthine and dysfunctional constitutional, judicial, and administrative structure of BiH and the country’s ongoing political paralysis.

The 1995 Dayton Peace Accords brought an end to the violence and implemented a complicated power sharing agreement, dividing BiH into two semi-autonomous entities: the Federation of BiH (“FBiH”), predominantly populated by Bosnian Muslims (“Bosniaks”) and Croats, and the Republika Srpska (“RS”), with a Serb majority. Brčko

District in Northern Bosnia was granted a special status and the FBiH was eventually further decentralized into ten separate cantons. Collectively, these entities are referred to as political subdivisions of BiH.

This political arrangement yielded a highly decentralized and byzantine system of justice. As a result, authorities across the country have been unable to agree to an equal standard of rights and protections for survivors of sexual violence. In BiH, the prosecution of war crimes, including the cases of conflict-related sexual violence, can take place at the state level or at the level of the state’s political subdivisions. In total, 15 different courts (10 cantonal FBiH courts and 5 RS courts) operating under different criminal legislation are empowered to investigate and prosecute an accusation of war-time sexual violence.

I. Complicated Legal Processes Have Denied Justice to Survivors of Sexual Violence

Bosnia’s fragmented system of governance has repeatedly resulted in the denial of justice for survivors of sexual violence. With no standardized procedure, survivors must take it upon themselves to research and navigate the byzantine legal regimen. Survivors of sexual violence interviewed by Amnesty did not know how to obtain the status of civilian victim of war, secure administrative compensation, or get psychological support.

According to the Balkan Investigative Reporting Network – Bosnia and Herzegovina, the state prosecution faces over 550 unresolved war crimes cases with over 4,500 identified perpetrators and an almost equal number of anonymous perpetrators remaining at large. A reallocation process designed to redistribute cases from the Court of BiH to lower level courts has been partially successful in clearing caseloads. However, this has been stymied by the political subdivisions’ limited judicial capacity and experience with witness protection. As described by one woman interviewed by Amnesty, “‘Justice is too slow, or it never happens. After the war, I reported the crimes. All the men who did this to me were members of the local police … These

courts won’t prosecute them. It seems that there will be no judgment for them in this world.”

The provision of witness protection and witness support in BiH has been significantly strengthened over the past years. Improvements to witness protection processes have enabled all 15 courts to facilitate witness anonymity through audio and video distortion during testimonies. Approximately two-thirds of the courts employ dedicated witness protection officers for witnesses during the course of their testimonies and offer separate facilities to ensure they are not forced to wait in the same room as their abuser. Despite these improvements, witness support is limited to the duration of the trial only. Witnesses who face harassment before or after testifying are often left to navigate the threats without external support.

Witness protection departments in courts and prosecutors’ offices rely heavily on funding from the EU and the U.S. to recruit and retain staff and finance training. When BiH failed to adopt a new judicial sector reform strategy, the European Union withheld two years worth of funds provided through its Instrument for Pre-accession (IPA) mechanism. According to an OSCE report, the reduced resources resulted in the termination of many investigators and other support staff, including witness protection officers in some courts, leaving some of the core positions vacant for an extended period of time

Under international law, all victims of war crimes, including survivors of sexual violence, have a right to remedy and reparation from the state.

While different political subdivisions maintain their own policies on redress for civilian victims of war, BiH lacks a comprehensive statewide framework for redress. Despite several efforts to do so, the authorities failed to adopt key policy and legal documents

that sought to put in place a system to address the rights of this group in a manner consistent with international standards. In 2012 and again in 2013, the BiH Ministry of Human Rights and Refugees and the BiH Ministry of Justice sought to implement several strategies and policies that, taken together, would allow Bosnians subjected to torture and ill-treatment during the war to obtain special status and enjoy specific rights regardless of their residency in BiH. Both attempts failed to garner the political support necessary to become law. As a result, different political subdivisions of BiH take different approaches to recognizing survivors and offer different forms of reparations. Some offer none whatsoever.

(1) Continue providing financial and other support to strengthen institutional capacities of the judiciary in BiH to prosecute crimes under international law: The U.S. should continue to provide significant assistance to BiH by helping the country reform its judicial sector. USAID’s “Justice Project in Bosnia and Herzegovina” project helps build courts’ capacity, train prosecutors, facilitate enforcement of judgments, and build public trust in the judicial system. The program is slated to conclude in 2019, and Congress should allocate funding for additional judicial sector reform and technical assistance in FY2020.

(2) Encourage BiH authorities to remove obstacles that prevent survivors from seeking redress: BiH is obligated to adopt a unified pathway for survivors of

sexual violence in wartime to seek justice and compensation under the UN Convention against Torture. Such policies should define criteria for how a survivor can obtain the status of “civilian victim of war,” ensure the inclusion of survivors of conflict-related sexual violence under that status, and enumerate specific rights guaranteed to survivors throughout all political subdivisions of BiH. Congress should press the U.S. Department of State to assist and encourage BiH to reform its legal system in order to provide much-needed and much-overdue justice for survivors of sexual violence.