On October 28, 2021, Amnesty International USA’s Executive Director Paul O’Brien joined with senior executives from over 100 other civil society organizations across the country to call on National Security Advisor Jake Sullivan to do more to move the most at-risk Afghans left in Afghanistan to safety. In a joint letter to the National Security Advisor, the 103 organizations expressed alarm at the slow pace of evacuations following the completion of the U.S.’s operations in Afghanistan on August 31st, 2021. The organizations also provided concrete recommendations for how the Biden Administration can move swiftly to evacuate more of Afghanistan’s most vulnerable people. The letter was signed by leaders of a diverse array of NGOs, including organizations working in the human rights, humanitarian, women’s rights, Afghan-American, veterans, faith-based, resettlement communities and in other spaces.

The full text of the letter can be downloaded here 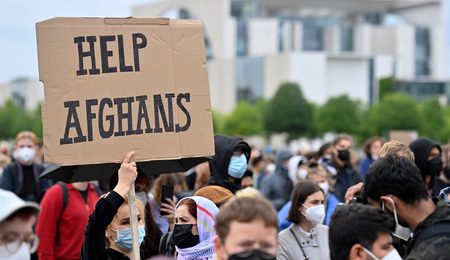 We, the undersigned leaders of 103 non-governmental organizations in the international development, humanitarian, peacebuilding, refugee, immigration and resettlement, and veterans affairs sectors, write to express our alarm at the estimated tens of thousands of at-risk Afghans who were left behind after the August 31 U.S. military withdrawal from Afghanistan. These individuals played key roles in efforts to strengthen Afghanistan’s government, judiciary, civil society, and media and to protect human rights. For their work, many now face the threat of violent retaliation at the hands of de-facto authorities. Given the urgency of this matter, our community respectfully requests a CEO or Executive-level meeting with you to voice our concerns and hear the Administration’s plans to evacuate and resettle at-risk Afghans who remain in Afghanistan.

We call on the Biden Administration to prioritize their safe evacuation before it is too late. Some of these individuals assisted U.S. and allied armed forces. Others worked for or alongside U.S.-based and funded organizations to secure women’s rights, establish a free press, or provide desperately needed humanitarian assistance to their countrymen and women. All are now bound by their shared fear for their safety. If the White House does not move to evacuate them with haste, it will leave an indelible stain on this Administration’s stated commitment to a foreign policy centered on human rights and its repeated commitments to support at-risk Afghans.

We are disappointed by the Biden Administration’s overly narrow list of priority stakeholders for evacuation, which currently includes only: American citizens, legal permanent residents (LPRs), immediate family members of American citizens and LPRs, U.S. Embassy staff, and Special Immigrant Visa (SIV) applicants with Chief-of-Mission approval. While these individuals are undoubtedly deserving of U.S. evacuation support, thousands of other Afghans face an immediate need for protection due to their affiliation with the U.S. Government. The failure to prioritize them as well imperils their lives.

We are particularly keen to hear the Administration’s plan to systematically process at-risk Afghans that fall outside of the scope of the SIV program, who have been consistently under-addressed over the past several months. We are especially concerned for those Afghans referred by employers to the P-2 designation of the U.S. Refugee Admissions Program (USRAP). The evacuation of these individuals should be seen as no less significant than any other priority evacuees given their work advancing democracy, human rights, and human dignity, and level of risk.

The FY 2022 Continuing Resolution requires the Biden Administration to create a strategy and status on Afghan evacuee resettlement, as well as the Afghan Priority-2 (P-2) program, and to create a plan for augmenting personnel needed for refugee processing or humanitarian parole. Below please find critical recommendations to expedite the evacuation and processing of at-risk Afghans for your consideration. These measures, if promptly taken, would make important strides towards restoring viable pathways to safety for at-risk Afghans and their families. We urge the Biden Administration to:

While Afghanistan sinks into a grave humanitarian crisis, credible reports from international human rights monitors, media organizations, and multilateral bodies indicate that the Taliban is targeting Afghans, including those who have worked with U.S. and allied armed forces and women’s rights activists, with retaliatory killings and violence. If the U.S. does not bring these vulnerable Afghans to safety, it will have failed to uphold its commitment to human rights and turned its back on the very causes of human dignity and freedom it claims to uphold.

The Administration must act now. We look forward to discussing these recommendations with you in the proposed CEO- or Executive-level meeting. 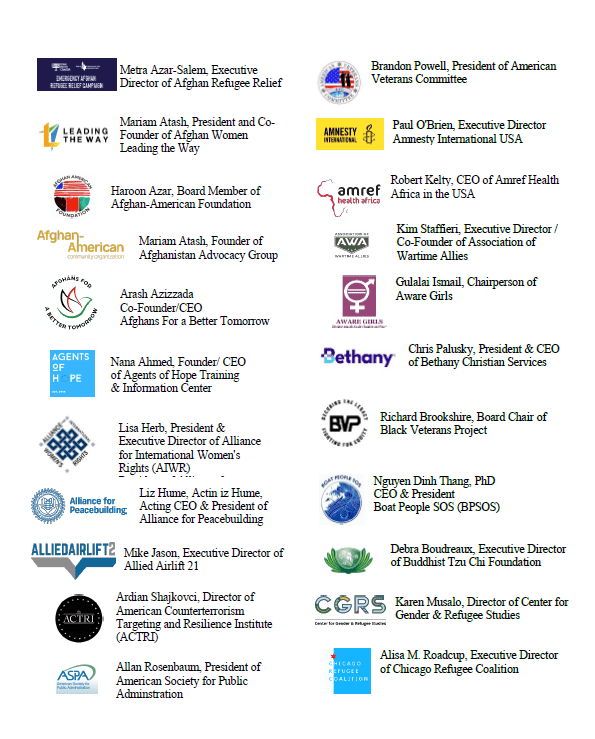 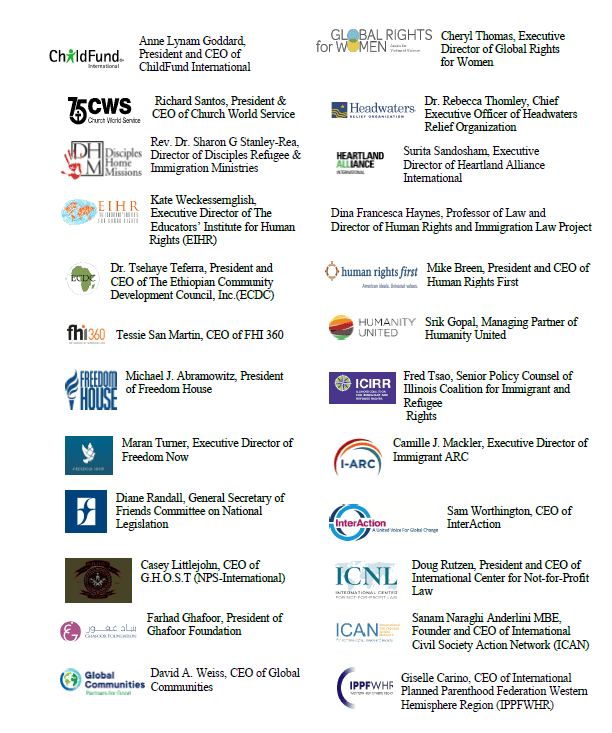 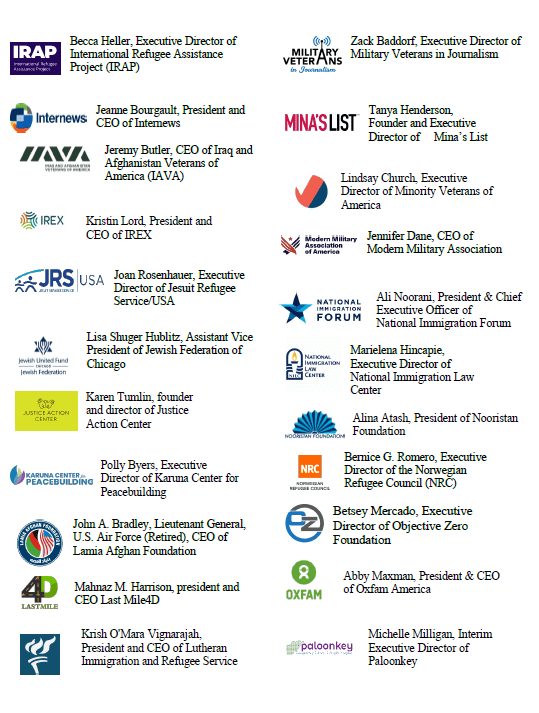 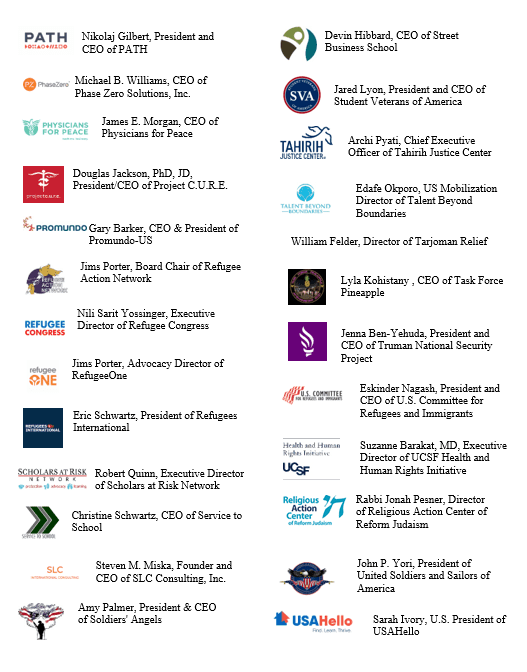 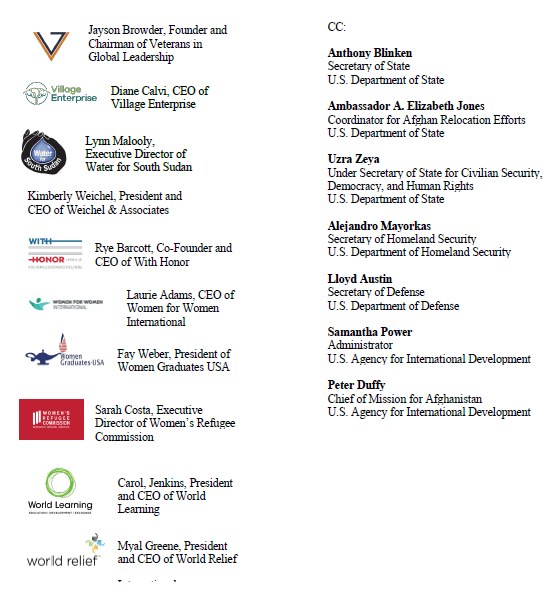